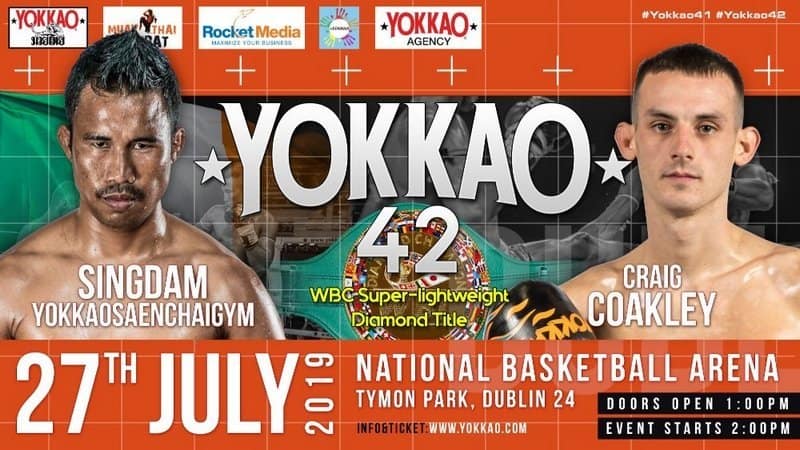 Singdam vs Craig Coakley: one of July’s most highly-anticipated fights, with certainly the most prestigious title on the line. The pair will meet in the ring on 27 July, headlining the Yokkao 41-42 show in Dublin, Ireland. One of them will walk home with the highly-coveted WBC Muay Thai Diamond Championship belt.

The WBC Diamond world title (Boxing) was first introduced in 2009, “created as an honorary championship exclusively to award the winner of a historic fight between two high-profile and elite boxers.” Saenchai became the first person to receive the WBC Muay Thai diamond belt in 2011 after his win over Kevin Ross. Thai fighting icon, Buakaw Banchamek followed suit in 2014 to capture the diamond belt. Now a third fighter is set to join the ranks of this very elite class.

It appears almost as if the fight has been tailored for Singdam, a multi-time Lumpinee and Thailand Muay Thai champion and a past recipient of the prestigious “Fighter of the year” award. The Yokkao fighter is widely considered to be a legend of the sport, fighting and beating many Muay Thai legends of his time. If anyone deserves a shot at this belt, Singdam is a contender no one can dispute.

But the Thai legend is not letting his guard down. He knows he is up against a young, hungry fighter who will step into the ring with nothing to lose, and everything to gain. Craig Coakley is also not just any farang fighter. He may well be the toughest opponent that Singdam has faced in the last few years.

Coakley has proven himself as a fighter to watch for with an impressive record. 24 fights, 21 wins and a blistering 17 KO. It’s no exaggeration to count him as one of the best Super-Lightweight fighters in the UK and Ireland. I would even go as far to say that he would do equally well on the global stage. This would be his golden chance to prove it – his time to shine.

In his recent interview with Yokkao.com, Coakley gave his blunt opinion of his opponent,

“He’s at the end of his career and I’m only getting started and coming into my prime. I think my style could cause a lot of problems for him. “

At 35 this year, Singdam is certainly not the man he once was during the peak of his career. He suffered three losses over his last eleven appearances, including two that ended with him knocked out cold. Those hard losses have prompted many of his opponents to attempt the same strategy via a bag-load of spinning moves although most failed to finish. Experience matters.

There is no knowing how many more years Singdam will continue to compete in the ring. His Yokkao teammate, Saenchai continues to fight actively at 39. The Black Lion is still a beast in the ring, as many of his opponents will attest to. The way I see it, Singdam still has a few good years in him on the international stage. The Diamond belt would be a glorious addition to his list of accomplishments and a cherry to top off his career.

As for Coakley, he’s been known to finish his fights when it’s least expected. He is not going to make this easy. He has about a 2-inch height advantage over Singdam, and can be very unpredictable. Coakley is a very dangerous opponent even going up against a seasoned legend with 300 over fights.

Singdam may need to deliver more than his usual strong right roundhouse and hard knees. He needs to stay vigilant against Coakley’s wide range of finishing moves. If the fight does go the distance, the 300+ fight experience will likely get him the unanimous decision.

Coakley will be going in with all guns blazing, firing from all angles and corners. It will take more than an elbow to bring down Singdam. Buriram fighters have been known to be as tough as it gets. But given Coakley’s streak of knockout victories, I won’t be too shocked if we see a stoppage.

My prediction? Singdam via points but I won’t feel bad if I’m proven wrong at the end of the day.

Yokkao 41-42 will be held at the National Basketball Arena in Tymon Park, Ireland. The event will be broadcasted on Facebook Live and Youtube (in all countries except Ireland). The stacked fight card also features a couple of noteworthy headlining matches including Liam Harrison vs Cristian Faustino and a potentially explosive bout between Spencer Brown and Stefan Korodi.  For audience outside of Ireland, the event will be live on Yokkao Facebook page.