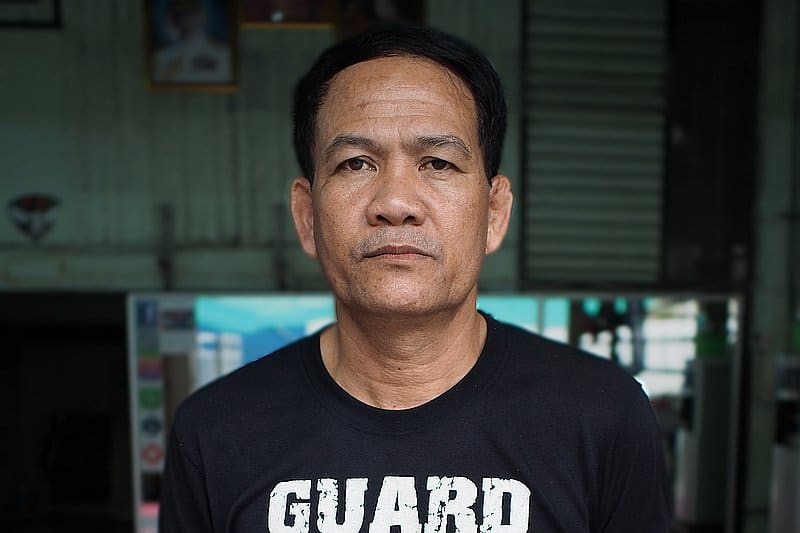 Between the years of 2005 to 2015, Petchboonchu FA Group fought his way up 5 weight divisions to clinch 14 titles in the elite Muay Thai scene of Thailand. While he may not necessarily hold the most impeccable fight record with 192 wins out of 328 fights, he has the honor of being the most decorated fighter in Muay Thai history. All titles being of the highest honor in the sport.

The competitive world of Muay Thai is a little more complex than what most casual fans realize and it takes more than just Muay Thai skills to truly succeed – sometimes, hard work just ain’t enough. Behind every successful champion fighter lies a complex blend of factors that include having the right promoter, having -even- the opportunity for a shot in a title match, and the blessed fortune of meeting the right trainer who can prescribe the ideal fighting style.

That trainer in Petchboonchu’s life happens to be current head trainer of the FA Group Gym, Ajarn Diesel. Kru Dee, as he is more often known to his students, was the man who walked right alongside Petchboonchu on his journey in clinching 14 championship belts.

Kru Diesel hails from Yasothon in the northeastern Isaan region of Thailand. He started training in Muay Thai when he was 13. He went on to compete in the region and almost made it to Channel 7 Stadium in Bangkok. Unfortunately, the fight failed to materialize and he returned to his hometown. There, he hung up his punching gloves to be replaced by kicking pads when he founded his own gym and began his career as a trainer.

3 years later, with his gym closed down and a subsequent 5-month trainer stint ending prematurely, he found himself back on the job market. Call it an alignment of the stars. As fate would have it, Kru Dee was introduced to Mr Liam, founder and manager of the FA Group Gym, through a mutual friend. There was no looking back since then and Kru Dee remained with the camp for almost 20 years up to this day.

The gym was still known as “Bor Pla Boonchu” and there were only 3 fighters back then. In particular, there was also one 30kg skinny kid from Udon Thani, who went by the fighter name of Petchboonchu (Thai: diamond blessed by the Gods). A name the skinny kid wasn’t exactly fond of at that time. Mr Liam moved the camp to Bangkok when his fighters started to gain prominence. There, he found a sponsor in food additives company, FA Group, from where the camp got its name.

With complete trust from Mr Liam, Kru Dee founded a camp of fighters built on the art of knee fighting. It isn’t any exaggeration to say that Kru Dee single-handedly molded the Muay Khao legacy of FA Group with a training regime that focuses primarily on clinching.

There is no rocket science to the FA Group’s signature forward-moving clinch-and-knee style. Kru Dee’s pad work often revolves around requisite roundhouse kicks, more punches, loads of elbows and tonnes of knee strikes. All these while he tries to engage and wear you out in the clinch. In essence, the FA Group Muay Khao style is all about conditioning: lots of running and lots of clinching. Repetitive, tedious, but also proven to be very effective in the ring. As Zig Ziglar once said, “Repetition is the mother of learning, the father of action, which makes it the architect of accomplishment.” For those embarking on the stylistic path of the Muay Khao, here are some words of advice from Kru Dee,

“Mainly the fighters at the (FA Group) gym are knee fighters. If they don’t train well, if they’re not fit enough and if they aren’t in good shape, there is a chance they will lose. They have to clinch. Basically, you have to be strong if you want to be a clinch fighter.”

Sounds easy in theory, but difficult in execution. The same reason why not everyone has it in them to become a champion because it takes immense will and heart to be a successful Muay Khao. In an interview, Petchboonchu humbly downplays his talent and instead attributed his success to sheer hard work. Kru Dee reaffirmed,

“First, he (Petchboonchu) is very fortunate that he got the title fights. Second, he was really self-confident. He practiced and trained hard with focus. He listened to the trainers and was always a very responsible kid.”

Kru Dee was awarded the Trainer of the Year in 2014, the same year that Petchboonchu won the Fighter of the Year award. A year later, Petchboonchu announced his retirement and moved to Singapore where he now plies the trade as a Muay Thai teacher at Evolve MMA. As for Kru Dee, life goes on and he continues in his role in producing quality fighters for FA Group. Yothin, the gym’s current top fighter has lesser luck compared to the “Diamond blessed by the Gods”. Despite his impressive records at Rajadamnern, ranking number one in the 115lbs weight division at one point, Yothin was never given a shot at the Rajadamnern or Thailand belt. There is only so much a trainer can achieve in the immensely competitive stadium circuit. But at least now Yothin commands a fight purse of 200,000 baht (approx. 6200 usd) compared to a couple of thousand baht before moving to FA Group few years back. And for that, Kru Diesel feels intangibly rewarded, “I am happy because Yothin is happy”.

Kru Dee has a very chill and down-to-earth vibe about him. On the day of interview, after a hard session of training in the afternoon, a farang friend of the camp bought a few cans of the local Chang Beer and handed a couple to Kru Dee who proceeded to knock one down. An idyllic scene accompanied by the background groove of vintage Thai pop and Molam music blasting from the car stereo. This is a very typical life of any Muay Thai trainer. Another day, another dollar. The fact remains: everybody remembers the legends who fought in the ring – Samart, Saenchai, Buakaw, Petchboonchu. But very few remember the trainers of legends. There is little literature celebrating the heroes behind the scenes and even when there were, would often be briefly skimped through. In years to come, Petchboonchu FA Group will remain one of the most celebrated Muay Thai fighters of all time but the same cannot be said of his award-winning trainer. However, like many of the best trainers in the world of Muay Thai, Kru Dee will be remembered fondly by the hundreds or thousands of students for whom he has taught and imparted the renowned FA Group Muay Khao style; and whose lives he has dearly enriched.

Special thanks to Matt Lucas for helping with the translation.

2 thoughts on “Hero Behind The Scenes: Kru Diesel FA Group”