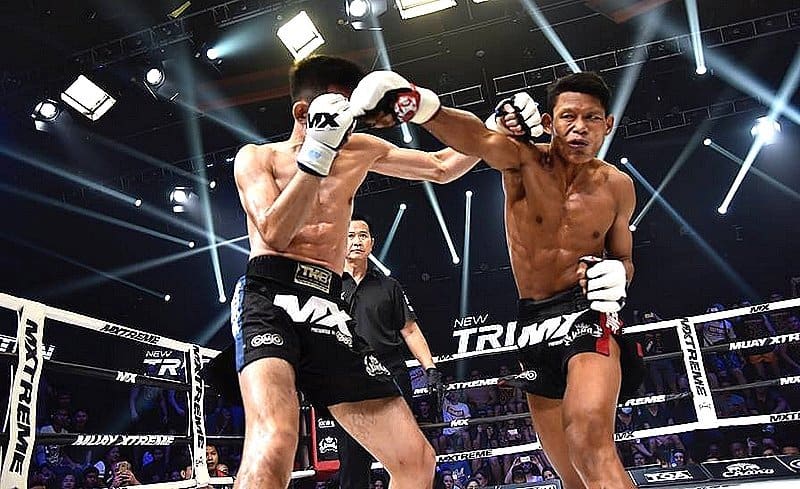 Muay Thai as a sport depicted in the stadiums of Lumpinee, Rajadamnern or Channel 7 has long lost its draw for the common sporting fan in Thailand. While the best in the country continue to compete on a highest level in said venues, the only loyal supporters who turn up every week to watch the fights are the gamblers and the random tourists.

The culture of gambling has a strong influence in the development of Muay Thai shortly after the golden era of the sport. The sport peaked in the 90s with crowds packing the stadiums every fight night and then things changed when gambling took over the sport. It evolved to favor fighting styles that scored points and win fights without having to take any risk, essentially fighting the way the gamblers prefer. In some ways, this has diluted the “blood sports” appeal of Muay Thai, making it a tad bland for modern taste buds. The sport as held in the traditional stadiums now bears an old-fashioned image to the youth of Bangkok.

With football, UFC and other entertainment outlets to contend with, a few clever Thais have stepped up the game with some tweaks in the business of Muay Thai promotions and they are doing incredibly well. Pattaya-based Max Muay Thai is undoubtedly the most popular Muay Thai TV show right now. The fight promotion burst into the Thailand fight scene back in 2013 and changed the way the sport was presented in the country. With 3-round bouts and ring girls parading IN the ring between rounds as emulated from their western counterparts, Max brought the sport of Muay Thai to a higher level of entertainment unparalleled in Thai history.

Max Muay Thai’s success can be attributed to the formulaic matchmaking that pits Thai fighters against foreigners. This is a great deviation from the stadiums of Lumpinee and Rajadamnern which are dominated with fights between Thais. And while the shows feature relatively lower-tiered fighters compared to the elites battling in the famous Bangkok stadiums, Max fights can often be a lot more entertaining. The shorter length of the match encourages the fighters to bring the action from the onset without the fillers that tend to plague the traditional 5-round bouts.

Several other promotions attempted with the same formula but none has yet to reach the popularity or success of Max. Then in 2016, 2 enterprising figures of Muay Thai took the game one step further with MX MUAY XTREME. Think of it as a MAX MUAY THAI on steroids. This Bangkok-based show is conceived by the minds of Top King CEO Narit Wongprasertkarn and Thakoon Pongsupha, 2nd-generation owner of Sasiprapa Gym. Fighters are fitted with finger-exposing 4oz gloves as commonly seen in MMA events. The lighter and consequently less padded gloves are the perfect ingredients for an even higher octane show than Max i.e. more KOs and more blood. In less than a year’s time, TV ratings for MX is coming hot on the heels of Max Muay Thai. It is apparent that the formula works.

With MX, the show has stripped away much of Muay Thai’s traditions such as the pre-fight Wai Kru Ram Muay rituals and the Sarama Thai music that accompanies the fights; replaced by stylish pop-rock walk-in music and stylish entrances. It could be said that the traditions are aspects of the sport that makes it unique but judging from the packed studios and stellar TV ratings, the locals appear to be embracing the change.

Recently, MX fighter, Army Sasiprapa made quite the entrance by singing his own walk-out song. Sang LIVE. Is this a sign of things to come for Muay Thai? Will it go the way of pro-wrestling with scripted drama, alter-egos, ridiculous costumes and even crazier stage antics? Who knows? Remember you heard it here first.