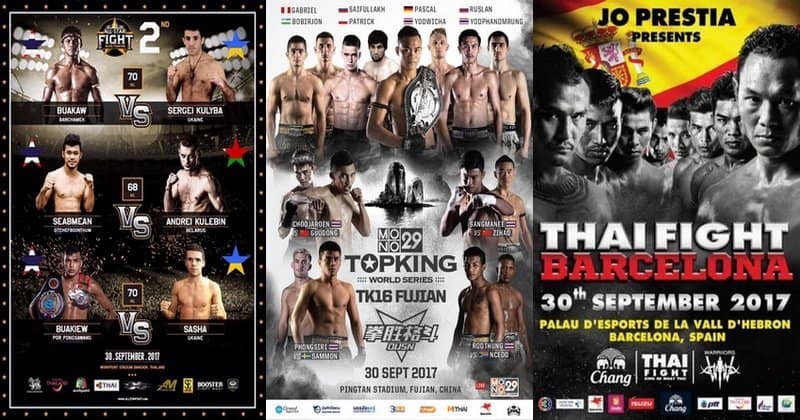 The stars align and it’s back-to-back-to-back action this Saturday 30th September 2017. No, you didn’t read that wrong. 3 popular Muay Thai events are set to take place on the same day in 3 different locations around the world. If you are in Thailand, here’s how you can watch them all LIVE on TV. Take down the following notes, get your beer and chips, order some takeout and prepare to binge-watch some great Muay Thai action.

First up at 4pm (Thai time), set the tube for Channel 23 Work Point for a date with Muay Thai’s biggest star, Buakaw. All-Star Fight 2. With Buakaw in the main event, there is no excuse to miss this. Add Pakorn and Manachai to the fight card and you have yourself a certified must-watch.

Next up, just a 3-hour flight away in the Chinese province of Fujian is Top King World Series TK16. Starring Yodwicha and other contenders looking to advance in the 70kg Top King World Champion tournament. Yodwicha will be defending his title against 7 challengers from 6 different countries but he remains the hot favorite to bag the prize once more. Current top Thai fighters, Sangmanee and Pongsiri PKSaenchaiGym will also be making fight appearances in this event. Top King World Series is a long-running promotion and one of the most internationally-recognized Muay Thai events in the world. This is one not to be missed. Catch it at 6:20 p.m. on channel MONO 29.

The final part of the day’s Muay Thai trilogy is the hardcore action of Thai Fight set to take place in Barcelona, Spain. This fight promotion may not always showcase the best in terms of matching skill levels between the fighters but there is no denying its entertainment value. Some of the fights will be carried out in Kard Chuek style, with fighters wrapping their hands in ropes reminiscent of the old ways of Muay Boran. Kard Chuek not only hurts more for the fighters, it is more hardcore as the fight ends either in KO or a draw. There is no win via decision in Kard Chuek rules,  so expect pure pummeling action. Many of the very best and most renowned Thai fighters have also shown up on the fight cards including 2 current regulars, Sudsakorn Sor Klinmee and Saenchai. The latter will headlined the event in Barcelona this time and you can watch it from 11.30 p.m.  to 2.00 a.m. on Thai Channel 3, LINE TV.

There you have it. Just 6 more days to go. Get everyone in on this and have a Muay Thai TV marathon, ending the action-filled month of September on a high note.

Fatality in The Muay Thai Ring