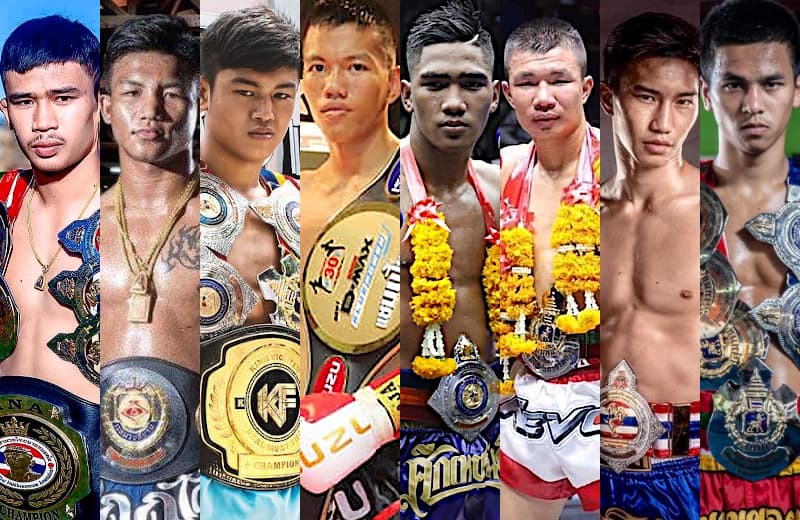 Champions come and go, titles change hands fast, and nothing last forever in the world of Muay Thai.

Thai boxing is a sport where athletes peak around 20 and with most retiring from the ring not too long after their peak. As a national sport, Muay Thai is also fiercely competitive in its native country.

Stardom is brief for many of the best fighters. But in every era, there will always be a handful of elite Nak Muays who stand out higher above the rest. Here’s my choice of the top Muay Thai fighters to watch now: Fighting out of Buriram’s Kiatmoo9 camp known for churning out champions (twice winning the gym of the year award), Superlek Kiatmoo9 is incidentally, the nephew of another Muay Thai legend, Singdam Kiatmoo9.

Superlek is a great fighter to watch, very technical, and also very deadly with the signature big kicks of Kiatmoo9 gym.

He is 3x Thailand champion, 2x Lumpinee Stadium champion, 2016 WBC 130lbs world champion, as well as the recipient of the prestigious Sports Authority of Thailand Muay Thai Fighter of the Year award in 2012.

He was ranked the top fighter in both Lumpinee and Rajadamnern in the super featherweight class in 2016.

Superlek is fighting towards the tail-end of his elite circuit career and is following his peers to compete on international promotions. He has appeared on 3 Yokkao shows (held in UK and Hong Kong) and signed a contract for ONE Super Series since 2018.

The Kiatm009 fighter is now looking to become a 2-sport champion after making his kickboxing debut on ONE in September 2020. He has since lost a highly-controversial kickboxing title bout against Ilias Ennahachi and a rematch is now on the cards (as of writing). Rodtang is one of the biggest Muay Thai stars today. Training out of the famed Jitmuangnon camp, the 21 year-old is a 2-time Omnoi Stadium champion, and current ONE Championship Muay Thai champion. He is best known for his hard hands and lungs of steel.

Nicknamed “The Tank” and “Iron Man” by media, the 167cm fighter may be short in stature but has been known to run over his opponents in the ring.

He went on an 11-fight winning streak in Thailand, beating the likes of Seksan Or Kwanmuang and Yodlekpet before a decision-loss to Kaonar PKSaenchaiGym in February 2020.

In 2018, Rodtang made his Japan debut when he took on kickboxing star Tenshin Nasukawa. The Thai fighter lost the fight in a highly controversial 6-round match that went into an extra round.

He returned to Japan again in November the same year, dominating his opponent to reclaim his honor with an unanimous decision.

Rodtang made his ONE debut in September 2018, fighting his way to clinch the Flyweight world title with two convincing defense against UK’s Jonathan Haggerty.

Like Superlek, Rodtang has begun dabbling in kickboxing, looking for the 2-sport honors. He remains one to watch in 2021. Sangmanee’s life is the stuff of legend. He started fighting at the age of 6, cleaning out all competitions in the region before moving to 13 Coins Gym in Bangkok.

There, he found himself training alongside Saenchai, before taking over as the gym’s star when the latter started his own PK Saenchai Gym.

In 2014, the young fighter was poisoned and almost lost his life, just so he would lose a fight. It is believed to be the malicious act, a result of the dark side of gambling pervasive in Thailand.

Sangmanee has held Rajadamnern titles across 3 weight classes as well as the 2012 Sports Writers Fighter of the year award.

Like many of his peers, the million dollar baby looks to be slowly transitioning out of the elite stadium scene. He can be seen mainly at Rangsit stadium and ONE championship. He also now runs his own Sathian Muay Thai Gym located in Bangkok and signed with new sponsor Cafe Muay Thai (hence the new fight name).

At just 23, Sangmanee’s best days are far from over. Despite winning only 1 out of his last 6 appearances, Sangmanee remains one of the top Muay Thai fighters today. The 2020 Sports Authority of Thailand’s Fighter of the Year, Kongklai AnnyMuayThai is on a tear since 2018 knocking out one elite fighter after another.

The 22-year-old won 10 out of his unstoppable 14-fight win streak by way of knockout using a variety of finishers from punches to elbows to kicks. Kongklai is a human weapon of mass destruction, destroying everyone that stands in his path and always exciting to watch in the ring.

2020 is certainly Kongklai’s breakout year. He won the Isuzu Cup tournament, knocked out “The Man who yields to no one” Seksan Or Kwanmuang and then beat Seksan again in a rematch to win the Omnoi Stadium championship.

Everyone is following Kongklai’s rampage closely and his rise up the elite circuit. It will be interesting to see him take on Rodtang Jitmuangnon or Capitan PetchyindeeAcademy in what is guaranteed to be an absolute world war. At just 19 years old, Rungkit Wor Sangprapai has captured the top titles in the sport including the Thailand champion 118lbs in 2016 (at 16!) beating none other than Rodtang Jitmuangnon and the Rajadamnern champion 130lbs in 2018.

One of Rungkit’s biggest wins came in his 2021 fight against the Muay Thai prodigy, Sangmanee via a 5-round decision, solidifying his place as a top Muay Femur of the new era.

Training and fighting since the young age of 7, Rungkit has fought and won against many of the biggest names in the sport. Besides Sangmanee and Rodtang, he holds wins over elite champions like Kiewpayak Jitmuangnon, Petchdam PetchyindeeAcademy, Suakim PKSaenchaiGym, Phet-U-Thong Or Kwamuang, Seksan Or Kwanmuang and Yodlekpet Or Pitisak.

Rungkit made his kickboxing debut in Japan in 2019. Although he lost via split decision, he has lots of potential is transitioning to the international kickboxing scene. Definitely one of the brightest stars to watch over the next few years. After a somewhat unremarkable Muay Thai career, Capitan was drafted for military service in 2017. He transitioned to amateur boxing between 2017 and 2018, during which he was largely absent from the elite Muay Thai scene. He then joined the Petchyindee camp in 2019, marking his return and rise to the top.

Capitan is riding a 14-win streak, reaching the apex of his career in 2020 when he captured three top-tiered titles all within the same year.

First the Lumpinee Stadium 154lbs title, then the True4U 160lbs title, and coming down in weight to finish the year off with a victory over Sangmanee to take the True4U 140lbs belt.

After a shocking one-punch round-one KO victory over Petchtanong PetchFergus in his ONE Championship debut, Capitan was awarded the opportunity of a lifetime: a chance at the ONE Championship kickboxing bantamweight title.

On 22 January, Capitan faced reigning champion Alaverdi Ramazanov in the ring at the Singapore Indoor stadium. The Thai boxer dominated and obliterated his Russian opponent, finishing the fight in round two with yet another KO victory.

Capitan looks to further his winning streak this year and it doesn’t look like he will be slowing down anytime soon. The PK Saenchai fighter picked up the coveted Sports Authority of Thailand award together with the Lumpinee stadium fighter of the year award for his outstanding results in 2018. His career was at an all-time peak.

Tawanchai is an highly technical fighter with great teeps and precise timing. The agile athlete has not been knocked out in over 100 fights until his eventual KO loss to China’s Jia Aoqi at the Wu Lin Feng world cup semi-finals in January 2020.

Since the loss, Tawanchai has remained low-key with only 2 fight appearances to-date. He is also moving up in weight with difficulty finding competition at current weight class.

Tawanchai signed with ONE Championship in October 2020 but has yet to make his debut for the promotion. The 21-year-old remains one of my top picks for this list with huge potential on the international fight scene where he will find more opponents and opportunity at his weight. In terms of Muay Thai accolades, Panpayak is unrivaled by being the only fighter in history to win the Sports Writers of Thailand Fighter of the Year award 3 years in a row!

Panpayak’s most notable records include 2 wins over Sam-A Kaiyanghadaogym including a first-round head-kick KO.

Panpayak has quick punches and kicks that he uses with great effectiveness in the ring. The 2-time Rajadamnern and 2-time Lumpinee champion is now 23 years of age with a fight record of 268 fights, 226 wins 38 losses and 4 draws. It would be interesting to see if he can take his career further into his 30s.

Panpayak shares his time between the Bangkok stadiums and ONE Championship. As he transitions fully to the international scene, it will be interesting to see how far he can take his femur style.

After a loss to Superlek on ONE in July 2020, Panpayak has been out of action due to a severe training injury. 2021 could see his return and his attempt to make his way back to the top of the circuit.

This is a list that reflects the impermanence of Muay Thai stardom. In a few years’ time, it’s hard to know if these fighters will still be active in the ring, or even fade into obscurity. But for now, these are the elite fighters, and perhaps legends in time to come. Are there other fighters you feel should be on the list? Leave a comment and let us know.