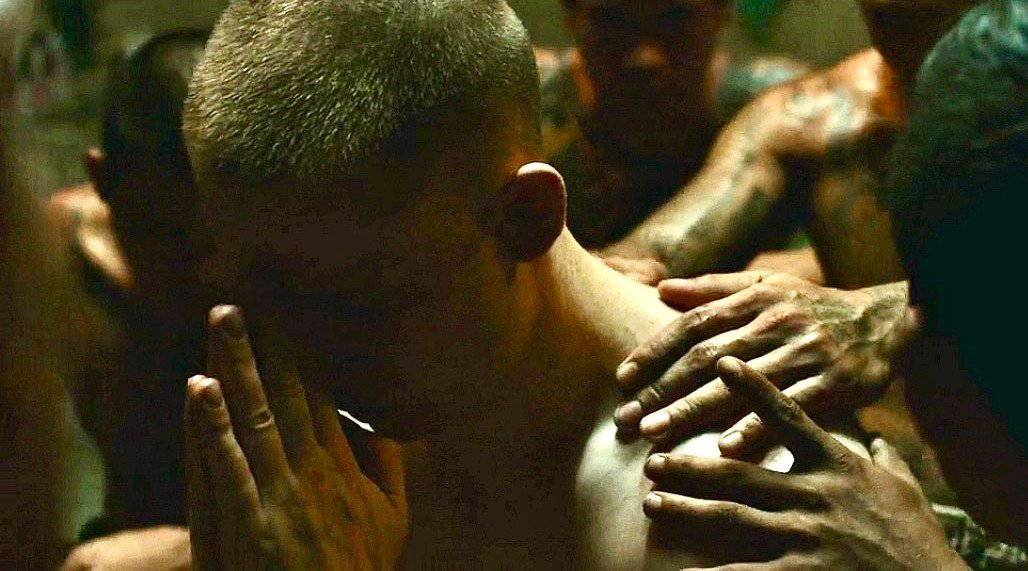 In A Prayer Before Dawn, director Jean-Stéphane Sauvaire works from a screenplay by Jonathan Hirschbein and Nick Saltrese, based on Billy Moore’s memoir of the same title. The movie plot is thin enough that it’s almost unnecessary to synopsise it.

For the sake of the review: British national and drug addict, Billy Moore is put into one of the world’s worst prisons (in Thailand), and from there, it’s a scene-after-scene depiction of a proverbial hell on earth. The movie centers on Moore’s battle with drug addiction with heroin and Yaba (synthetic drug produced in Southeast Asia) and how he manages to seek both refuge as well as freedom through Muay Thai.

The film rips out a massive chunk from the original text unsparingly, throwing the main character -and audience- almost straight into Thai prison hell. For those who have not read the book, this theatrical treatment leaves the viewer with no background story of the central character.

Tormented by his drug addiction and his glaring role as the prison’s sole farang, Moore was prone to getting into trouble whether of his own making or not. It can be hard to have any sympathy as we watch how he succumbs repeatedly to drug habits and even resorting to unprovoked violence. When you analyse it objectively, Moore is really both the protagonist and the antagonist in the story.

Almost halfway into the show after a series of unfortunate events, Moore eventually seeks out and joins the prison Muay Thai team. There, he embarks on the next phase of his arduous journey in confinement, leading up to the climatic fight of the film and his life.

It is worth mentioning that much of the movie is not subtitled even for the predominant Thai dialogue. This serves to alienate the viewer in the same way the actual circumstances did for Moore. Much of what goes on in the movie is straightforward and intuitive that the lack of subtitles does not affect the experience, but actually enhances the realism aspect of it.

While the film doesn’t quite deliver in terms of character development, It’s an intense experiential ride from the get-go as we follow Moore navigating from one precarious situation to the other. There is hardly any filler and every scene feels like it was meticulously designed to induce a sense of discomfort. As a prison drama, A Prayer Before Dawn excels brilliantly as an immersive cinematic experience.

English actor, Joe Cole brings a hint of tenderness to the troubled main character, conveying the sense of confusion that would no doubt consume a foreign inmate in the notorious Thai prison camp. While the ring action sequences were decent and more realistic compared to the typical Hollywood flicks, Cole was unconvincing as a Muay Thai exponent with stiff roundhouse kicks and stiffer posture. Perhaps he could have spent some time training with Thai boxing legend, Somluck Khamsing who was perfect in his role as the head coach of the prison boxing team.

The rest of the cast is largely made up of a motley crew of real-life ex-cons, some of whom also made appearances in notable prison fight documentaries. It’s a commendable effort in orchestrating the prison scenes given the collective lack of acting experience.

With its niche and arthouse treatment, the film isn’t widely released in theatres around the world. Most people may have to content with watching it on their tv or computer screens. Both the expert handheld camerawork and sound production put you right in front-row seats of Moore’s ordeal, lending to an unnerving full assault on senses. There were a few scenes that may be a little too realistic for comfort.

I highly recommend tracking down the memoir and a number of prison fight documentaries which you can find on the web. These materials supplement the understanding of Moore’s incarceration background of the actual prison fights, which can enhance the enjoyment of the film.

Billy Moore’s tale of redemption doubles fittingly as a cautionary tale against the dangers of drugs. Stay clean in Thailand – Yaba is a hell of a drug.

Editor’s Note: This article was originally published in Rough Asia.