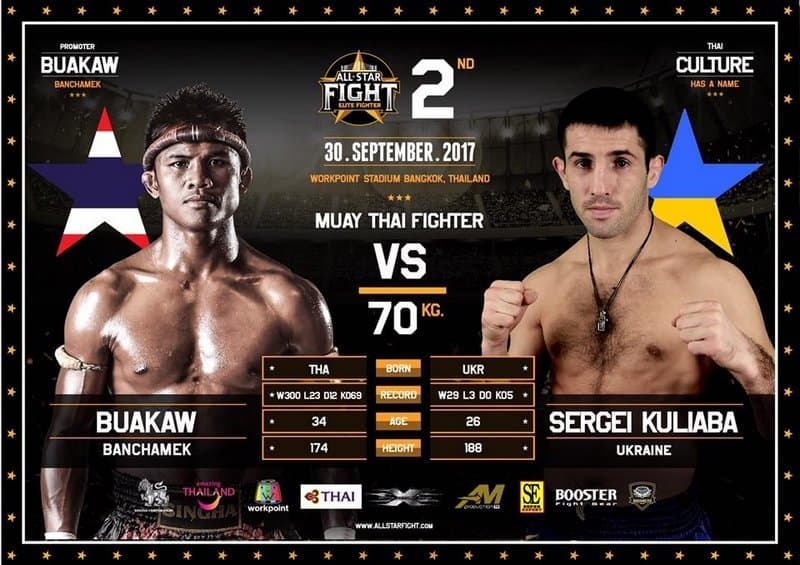 After a successful inaugural event a month back on the 20th August, All-Star Fight: Elite Fighter is set to return on 30th August for the second installment.

If you have been following the Thailand fight scene, you would have heard of All-Star Fight by now. For the uninitiated and uninformed, All-Star Fight is a new Muay Thai event based in Bangkok. The big name in the promotion is none other than the most recognized Thai fighter in the world, Buakaw Banchamek. Buakaw is named as a promoter of the show, although that’s really just using his name for publicity sake. The grinding promotion and matchmaking work is done by Sasan Ghosairi, who has been pivotal in Buakaw’s career the last couple of years. This is not the first time Buakaw’s name is tied to a Muay Thai show. There was the “Buakaw Presents Super Muay Thai” show that debut in late 2015 as a Muay Thai TV event and All-Star Fight has been conjured to be the follow-up.

The show is organized in partnership with Chinese fighter promotion, Kunlun Fight, where Buakaw has been most actively fighting in the last few years. Besides Kunlun Fight (昆仑决）, the event has also secured a number of big names as sponsors, most notably the Thai Tourism Office and Singha Beer. The event is held at the Workpoint Entertainment Studio in Bangkok and televised LIVE in Thailand. The promotion team has big plans for the event and is even looking to bring it to the international stage (Europe) this year.

All-Star Fight bouts are typical of Muay Thai events designed for the modern/TV audience with 3 x 3-minute rounds as compared to the traditional stadium rules for 5 x 3-minute rounds. No filler-round 1s and 5s like they do in the stadiums. With 3-round matches, action is consistent right from the start and KOs more frequent, which makes them more entertaining for viewers. As a matter of fact, including Buakaw’s round-1 win, there were 4 wins via KO and another by TKO in All-Star Fight! Check out the fight below. Even though it ends within just 161 seconds of the fight, it’s worth watching just for Buakaw’s dramatic entrance.

With Buakaw tied to the show, All-Star Fight 1 featured a majority of fighters from the Banchamek gym on the fight card. Other prominent fighters include Pakorn and Manachai from the YOKKAO Fight Team. The fight card was set up in a way that pitted Thai fighters against “farang” opponents and it is likely that they retain this formula for subsequent shows. So far, Buakaw, Manachai and Pakorn have all been confirmed for All-Star Fight 2 this 30th September. Buakaw is set to face Sergei Kuliaba from Ukraine. Sergei has fought Jomthong Chuwattana at Super Muay Thai back in 2015. Despite a loss, Sergei managed to cut Jomthong above his left eye so he’s not exactly a walkover for Buakaw.