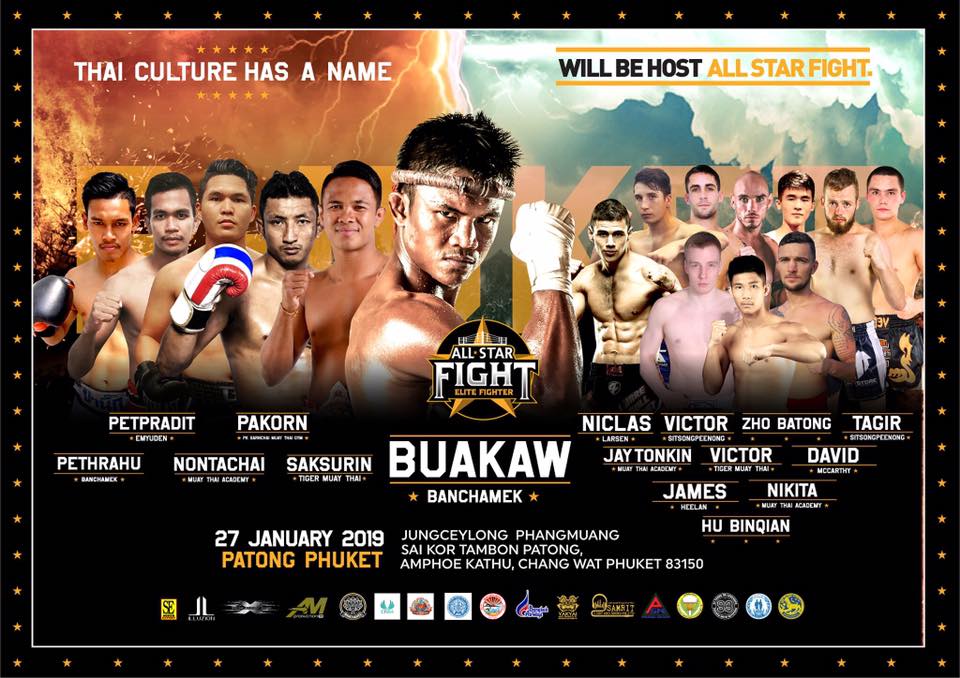 All Star Fight to Make Phuket Debut on 27 January

Muay Thai global icon Buakaw Banchamek is back once again with his signature All Star Fight series. For its 7th edition, the promotion is heading south to the popular island of Phuket on 27 January for an exciting night of Muay Thai action.

Buakaw will take on Niclas Larsen from Denmark in the main event. This is a fight a long time coming for Larsen, who was originally signed up for All Star Fight 3 against Buakaw last April. The Danish kickboxer had to withdraw due to skin infection. Larsen then made his promotional debut on All Star Fight 4 in Hong Kong against Petchtanong from the Banchamek camp. The face-off is now back on and Larsen will go head to head against the Muay Thai icon.

Other than the main event, All Star Fight Phuket will feature notable fighters such as Pakorn PKSaenchai as well as ASF alumni like Jayy Tonkin, and Nontachai Muay Thai Academy. A total of 16 fighters in 8 matchups have been lined up for the coming show.

Tickets for All Star Fight Phuket are now on sale on the official website. Standard tickets are priced at 1500 THB and VIP tickets at 2500 THB. Alternatively, tickets can also be purchased by emailing sxsbank@gmail.com and payment made via PayPal. The show starts at 5pm on Sunday 27 January at Jungceylon, and is proudly sponsored by Super Export Shop.

Check out the full fight card: