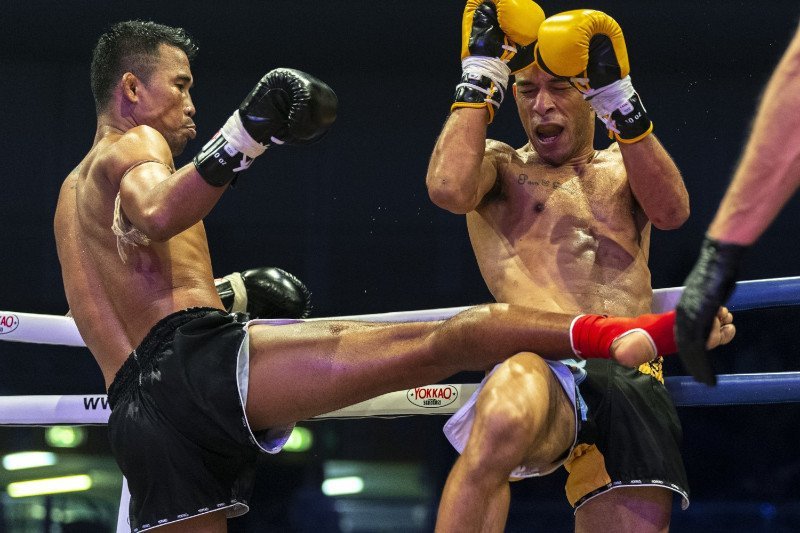 We can all agree that Muay Thai is one of the most effective and dangerous fight sports in the world. Muay Thai utilizes a range of weapons like knee strikes, punches and elbow strikes. It also has a powerful roundhouse kick thanks to the tough conditioning of Muay Thai training. But can a Muay Thai kick kill?

There is no secret to Muay Thai training methods. Fighters train 6 hours every day kicking hard heavy bags, Thai kick pads as well as long distance running. Not only can their kicks generate a huge amount of power, Muay Thai fighters develop thick, hard shins and dense shin bones from years of conditioning from a young age.

Broken arms and ribs from being repeatedly kicked by Thai fighters are not uncommon. Some of the most well-known hard kickers in Muay Thai include Yodsanklai Fairtex, Samkor Kiatmontep, Singdam Kiatmoo9, and Apidej Sit Hurun.

These fighters have all broken the bones of their opponents at some point in their career. Muay Thai kicks could potentially be fatal if inflicted on the head by a trained fighter on someone much smaller and lighter in weight.

Due to the potential health risks involved in fight sports, fighters and their trainers ensure that proper training and conditioning are carried out before taking part in competitions. Muay Thai is a sport and there are weight classes, as well as measures and ring officials put in place for the safety of the competitors. Fatalities in the ring are almost unheard of in professional Muay Thai.

Based on my research, I have found three Muay Thai fatalities recorded in the last two decades. Two of them involved amateur fights where the competitors were making their debut in the ring and the deaths were not trauma-related.

The third is unfortunate and involves a 13-year-old Thai, Anucha Thasako. Anucha was knocked out in the ring and could not regain consciousness. He was pronounced dead from brain hemorrhage. Anucha started training when he was 8 and had 170 fights on his record before his unfortunate demise.

Anucha’s death is one of few deaths related to actual fighting. Muay Thai-related deaths have often occurred outside of the ring. There have been several known cases where fighters collapsed and then died due to extreme weight-cutting.

According to a research, 33 NCAA football players died playing the sport between 2000 and 2016. That’s an average of two per season. The probability of dying in a Muay Thai fight is certainly much lower than one would assume or compared to other full-contact sports.

Muay Thai techniques like the roundhouse kicks are designed to hurt in the fastest, most direct way. However, the probability of killing a person by one swift Muay Thai kick in reality is likely to be impossible.