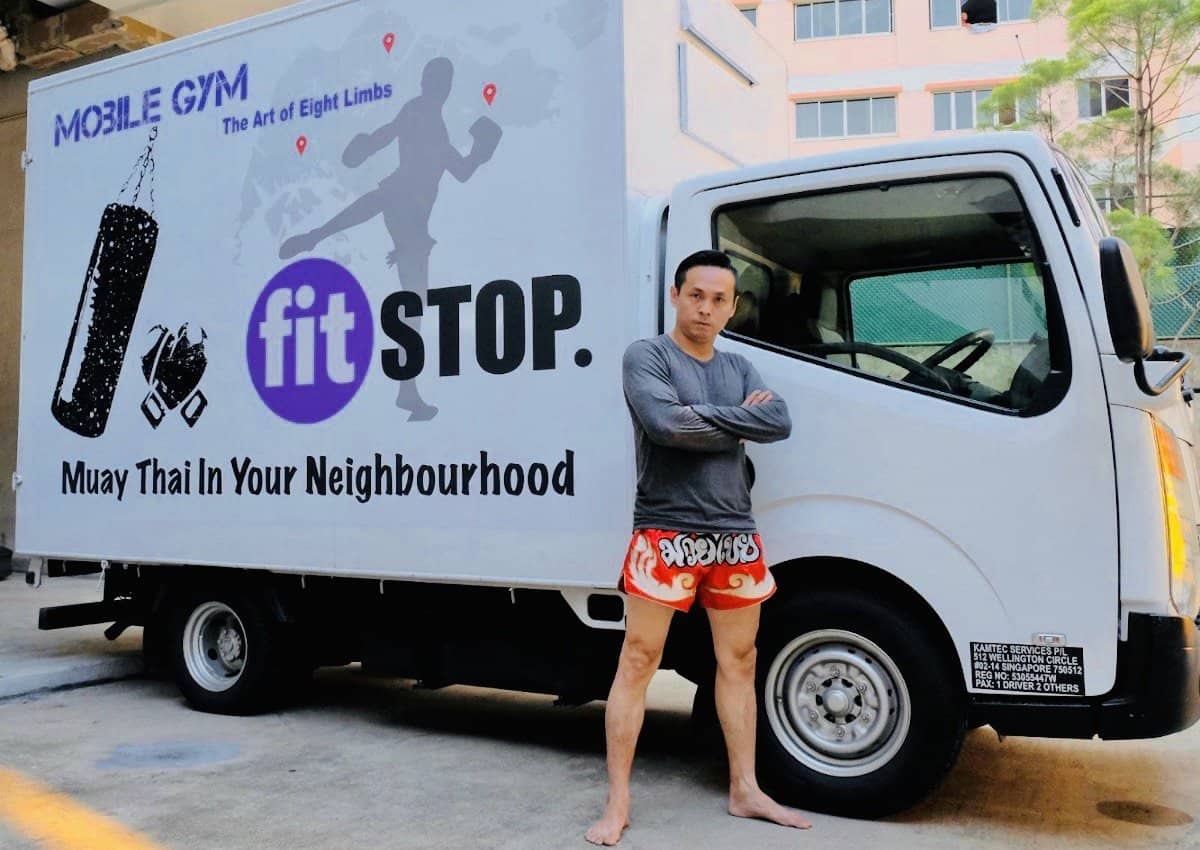 Note: This story on Fitstop was originally published in The Fight Nation on 27 March 2018.

Land is a scarce resource in the miniscule island state of Singapore. Sky-high rental prices are pervasive and have become a challenge for many businesses including martial arts gyms. Gym membership fees in turn, become a barrier to many potential students of Muay Thai.

Enters FitStop, the country’s first mobile gym that brings Muay Thai to the neighborhoods. The novel Muay Thai gym-on-wheels comes fitted with 2 heavy bags, along with a complete arsenal of training equipment.

From focus mitts to kick pads, jump ropes to battle ropes, the truck has got it all. More importantly, FitStop charges economical fees that allow martial arts fans of all socioeconomic status to learn and experience the sport of Muay Thai. 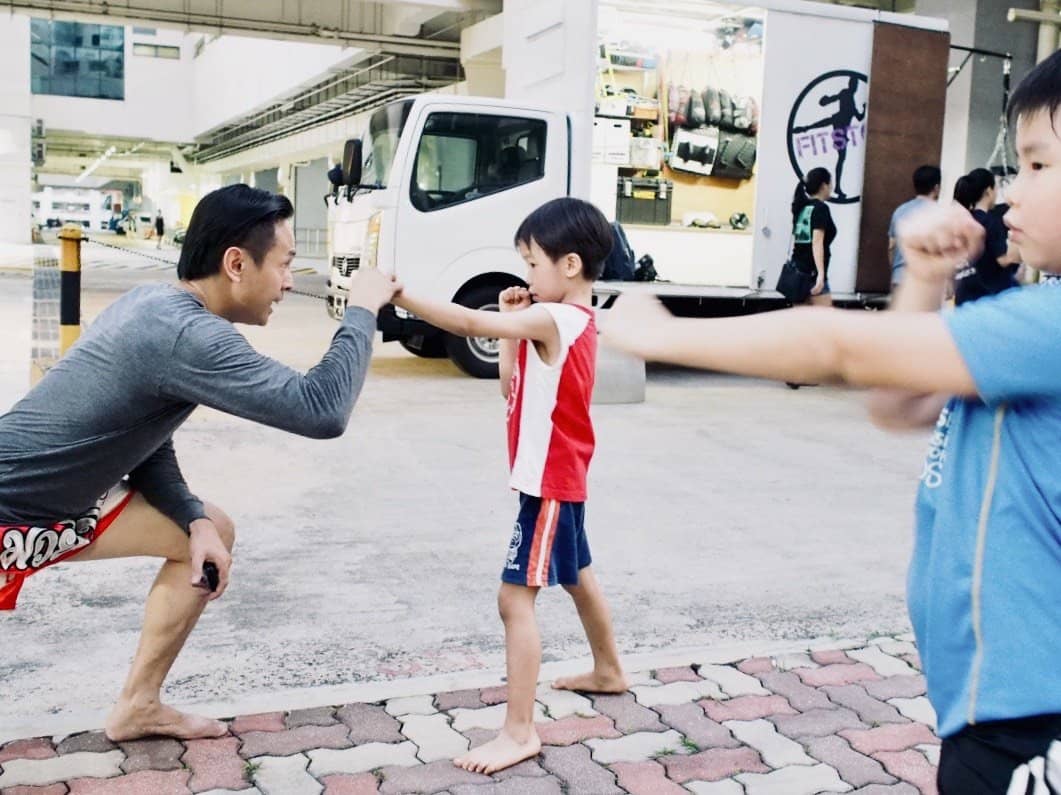 The Muay Thai enthusiast first picked up Muay Thai 8 years ago, training outdoors under Master Johnnie Yeo at the latter’s Hilltop Academy. Master Johnnie is a respectable figure in the local Muay Thai community and one of the pioneers to teach the Thai martial art in the country.

It was in 2017 when Ace decided that he would try to set up his own gym. With commercial rental cost a prohibitive factor, the enterprising Muay Thai practitioner looked to his mentor’s outdoor-based academy for inspiration. He decided to tweak it a little and came up with the mobile gym solution.

Before the Muay Thai truck came into fruition, Ace experimented with the mobile idea using a smaller van and smaller set of equipment. He tested the viability of the outdoor training concept for the better part of 2017 at various parks and stadiums around the country.

When he felt it was ready, Ace decided to take the mobile concept further and the mobile truck was eventually launched this year 2018. He tells us,

“I designed everything up from scratch and only found someone to construct the bags frame. But the ideas are completely mine. I spent close to 20 thousand (Singapore dollars) on it. There are operating costs like petrol and maintenance but still cheaper compared to rental prices.” 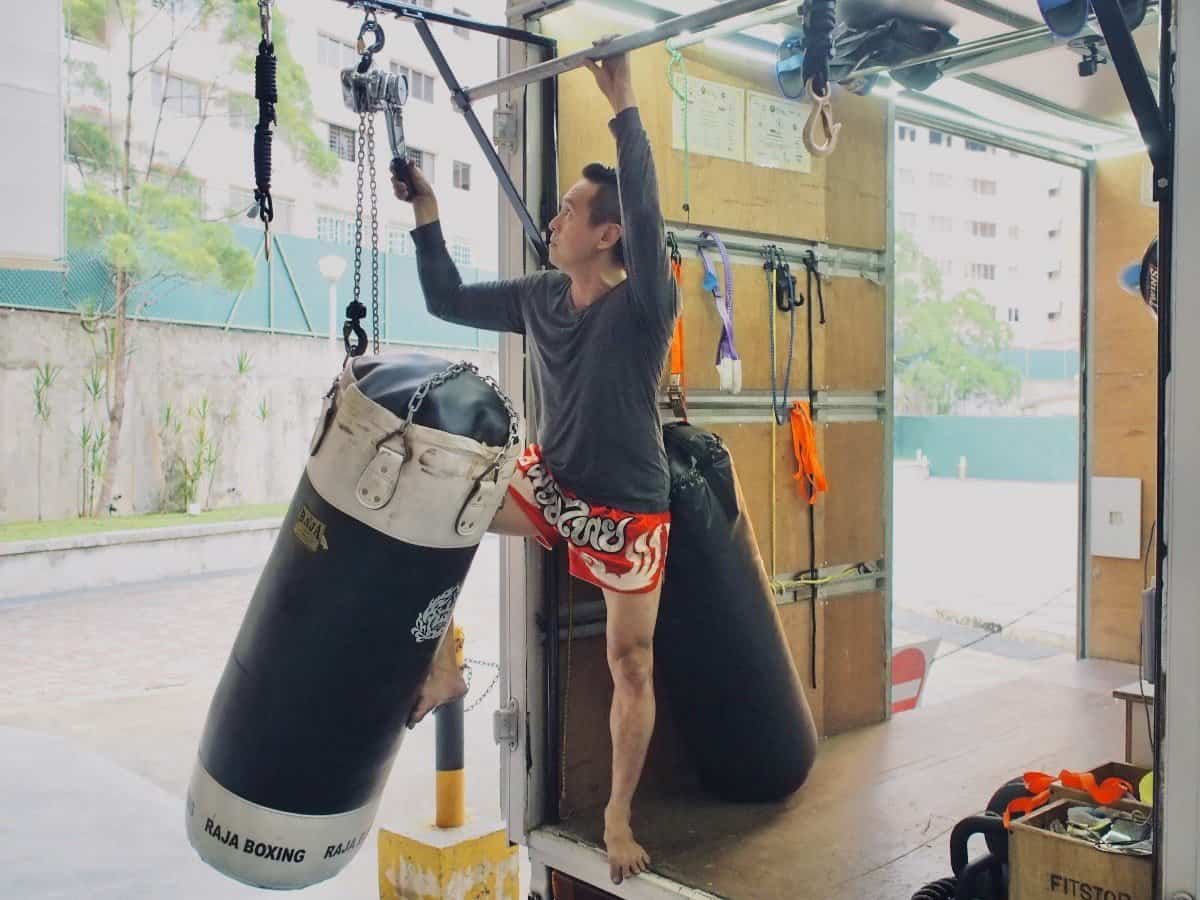 After 3 months in operation, FitStop is slowly gaining traction. The truck operates in 3 different locations with a fourth in the works. Ace sees a clientele as young as 7 to working adults in their 30s but teenage boys make up the majority.

He charges about 38 USD (as of 2018) for 4 weekly sessions a month. The affordability is a key pulling factor for many people who want to try out the Thai martial art but put off by the gym membership prices. In comparison, local mixed martial arts gyms charge a hefty monthly subscription rate between 150 – 300 USD.

Ace does not boast an accomplished fight record or any championship belt to back. However, he makes up with genuine passion, great enthusiasm, and authentic Muay Thai training that keeps his students coming back.

FitStop relies on free advertising platforms, word-of-mouth and attempts at social media marketing to reach out to potential customers. However, most of the sign-ups come from passersby after witnessing Ace and the truck live in action. He now intends to take FitStop into a full-time endeavor.

“I’m still building up the business at this point but it is not possible to do this on my own.There are many aspects of running a business like marketing, finance, administration that I am simply not good at. Thankfully, my friends have volunteered to help me out”, he said.

Ace now commands a team of 6 in running FitStop who help out with Facebook marketing and advertising the service. He has also started looking for a trainer to help out as the classes are getting bigger and he wants to cap it at a good trainer-student ratio.

The ardent martial artist aims to introduce Muay Thai to a wider audience, having experienced the benefits personally. He explains,

“I used to be a heavy smoker but after picking up the sport, I actually quit smoking and drinking as I wanted to excel in it. There are many benefits of martial arts training besides improving fitness or health. It also teaches respect, discipline and mental strength. These were the values taught to me by my teacher, Master Johnnie that I hope to impart to my students too.”