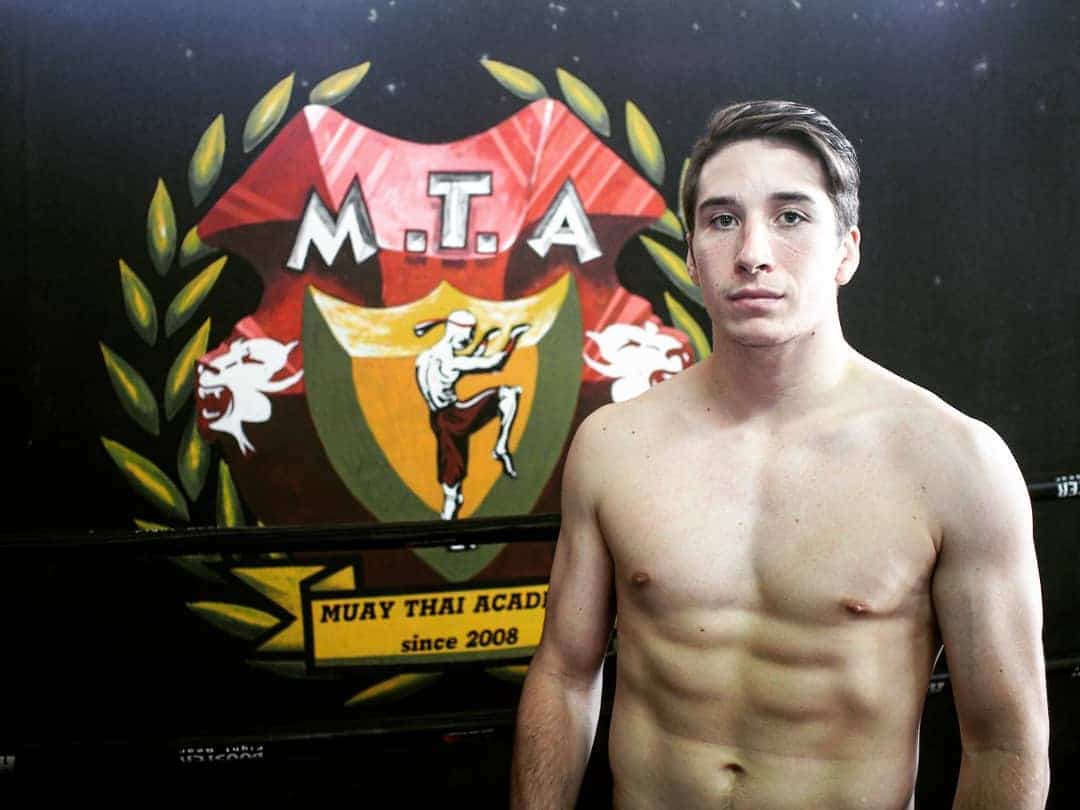 In this edition of our fighter spotlight series, I turn to Bangkok-based Australian fighter Jayy Tonkin. I met Tonkin earlier this year in July when I was doing an interview with Superbon Banchamek at the Muay Thai Academy. He is a young, up-and-coming fighter with a great all-round personality. Read on and find out why he’s one to watch out for in the Muay Thai scene today.

Buakaw’s latest project All Star Fight returns on 4 November after a good 4-month hiatus. I’m back in Thailand to attend the show, with a 2-day stop in Bangkok enroute to Pattaya where it’s held. The card was released just 2 weeks back and it was a pleasant surprise to spot a familiar face on the poster – my recently-acquainted friend, Jayy “The Dingo” Tonkin.

Tonkin has been training out of Bangkok’s Muay Thai Academy (MTA) in the last 6 months. He has fought against some of the best fighters and he’s going to get a big break on Buakaw’s All-Star Fight where he faces Thai opponent Adopoon.

Before we got through the other questions, the one that begged to be answered was his fight nickname. The Dingo is a dog native to Australia but was actually brought to the land down south by seafarers from Asia 4000 years ago. Tonkin explains the canine connection,

“Before they used to call me the Boxing Kangaroo since I was from Australia. Then when I was training at Fairtex, an Aussie guy called me the Dingo and it just stuck. The Dingo came originally from Southeast Asia, so it actually makes a lot of sense that I find my way here as The Dingo.”

For a 21-year-old from Sydney Australia, Tonkin’s fight history is actually really impressive. He started fighting 6 months after picking up the sport at 15 years old. More impressively, his debut fight was on Phuket island against a 22-year-old English lad. He won the fight by a round-2 KO. It was an auspicious beginning but his decision to make fighting a living came later. Tonkin recounts,

“It was a scary experience and I thought I’d never want to do it again. After my first fight, I thought that maybe I will have 5 fights and then I will retire. But I fell in love with it the more I fought.”

With his innate talent, Tonkin received his first sponsorship at 16 with Phuket Top Team. He relocated a few times around Thailand along the way before settling down in Bangkok this year.

Tonkin now holds a record of 27 wins in 43 fights that include 17 KO victories. Before you scoff at his less than perfect results, it’s crucial to know some of those 13 losses are contributed by names like Detnarong Wor Sungprapai, Chamuaktong PKSaenchaiGym and Singdam Kiatmoo9. The last of whom he favorably lists as one of the toughest opponents he has faced to date.

In May of 2014, the then 16-year-old Tonkin took part in the prestigious Toyota Marathon with Singdam and Saenchai in the race for the grand prize. He shares the experience,

“I didn’t have a training camp and all I did was 2 weeks of bag work on my own. I fought a Kenyan in the first fight and knocked him out but I was already tired after the fight. Then I had to face Singdam in the second fight. He’s my all-time favorite fighter and still is today. I managed to drop him once in the first round but he just barraged me with his knees which ended up cracking my ribs in round 2. I lost by KO.”

There’s a lot to be proud of in the loss but Tonkin is working his way up into the big leagues. If anything, his respectable work ethics will get him there with little delay.

Tonkin arrived at MTA 6 months ago (april 2018) after the gym’s owner and well-known fight promoter Sasan Ghosairi poached him over to the gym. Ghosairi name-dropped kickboxing star Superbon as a regular at the camp and Tonkin was sold. Since joining the MTA fight team, Tonkin is more focused than ever before.

“When I’m in Bangkok, it’s just training. I’m on a strict schedule: train, sleep, eat, no partying”, he said.

Tonkin is feeling confident about his coming meet on All Star Fight this coming Sunday (4 November). For the young Australian athlete, this is but just another step towards achieving his goals. Tonkin speaks confidently,

“I predict I will be one of the best fighters in 2 years. I want to fight on all the big promotions. I have been fighting the top guys but instead of getting fed to the dogs, I’ll be the big dog because I’m the Dingo.“