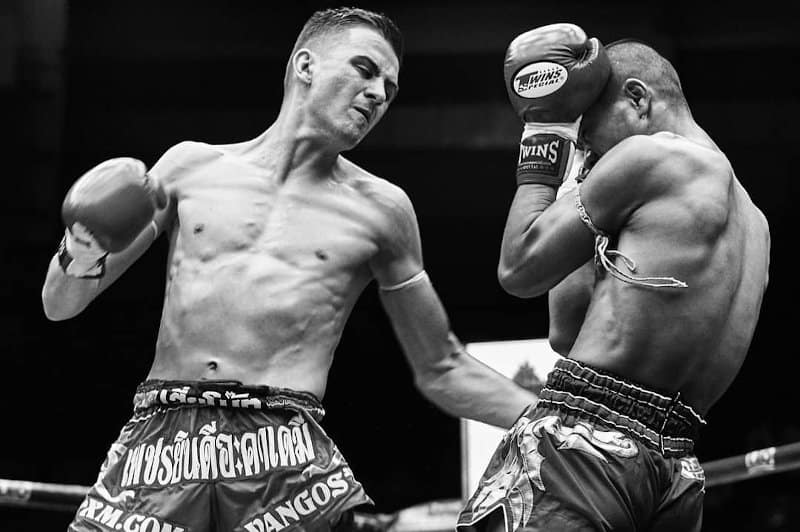 Muay Thai is a highly technical sport, more so than people give it credit for. It is also a complete striking martial art with a wide range of weapons and techniques. Muay Thai is an art of war as much as it is a brutal combat sport.

As much as we enjoy watching Muay Thai technical masters like Saenchai in action, everyone loves a good brawl. You can always count on the Muay Mat for delivering exciting all-out wars.

But who or what is a Muay Mat?

What is Muay Mat

A Muay Mat (Thai: มวยหมัด meaning: punch boxer) describes a fighter or style of fighting that centers around punching. You can say that they are fighters who are good with their hands.

The Muay Mat is not only a skillful and powerful boxer. His key to winning fights also relies on an aggressive fighting style. Heavy punchers are always bringing the war to the ring. They know that the Muay Thai scoring system is not always on their side and knocking out their opponents is the best way to secure a victory.

The Muay Mat often adopts a forward-moving persistence, always the one to put the pressure. It’s also not only about the punches. They usually supplement the punches with chopping leg kicks in their relentless attacks.

Muay Mat fighters thrive in 3-round fights by going for the head right off the bell. Besides being good with their hands, this aggression is why many of them crossover to kickboxing rules with success.

It is always such an adrenaline rush watching the Muay Mat in action. These heavy punchers go into overdrive mode, dropping bomb after bomb until the end of the fight or their opponents go down.

How to Deliver the Knockout Punch The Muay Thai kick generates more force than a punch. However, statistically speaking, there are more knockouts from punches than kicks in kickboxing sports. The reason is that punches are faster and easier to execute.

Fighters can throw punches with a much higher volume than kicks but it is not just the quantity. The quality of the punches matter too. Muay Mat fighters are heavy punchers with hands that can, well, pack the punch. The other piece of the puzzle is accuracy and knowing where to strike. There are a few spots on the human body that are more vulnerable such as the chin, jaw, the spot behind the ear, and the liver. This is why sometimes fighters get knocked out by a punch that doesn’t seem all that hard.

The final piece of the puzzle is technique which brings together power and precision. Power increases dramatically by having the right technique. The force of a punch starts from the feet, up through the pelvis to the back and shoulders before arriving at the fist.

Now let’s further dissect some of the main weapons of the Muay Mat:

The hook punch can be an instant sleeper when it connects with force. It can target the jaw, chin, or temple. It also comes from an angle that is hard to see and so harder to evade than the straight punch.

Hook punches to the chin or jaw can generate a sudden movement of the brain similar to whiplash. This brain trauma or concussion causes the brain to momentarily shut down. Knockouts by hook punches are often the most thrilling finishes.

A straight punch to the chin can be just as effective as the hook. The cross is a straight punch using the dominant hand which is the rear hand depending on the stance of the boxer.

It may be easier to defend against the straight punch as you may see it coming.  But like the hook to the chin, a straight punch right smack to the chin thrown with the right amount of force and precision can put an opponent to sleep. Although not as glamorous as a head shot KO, the body or liver shot just as effectively shut down a boxer instantly. A precise hook to the liver, which is on the right side of the body, results in sharp pain and shortness of breath.

The solar plexus is another vulnerable spot that can send a boxer to the floor. A good old stomach punch can knock the wind out of a person.

Both the liver shot and stomach punch can reduce an opponent to his knees. Even if he’s able to pick himself up, often all it takes is a couple more punches to finish the game. It’s game over.

Here are some of the best Muay Mat fighters you should know: Sagat Petchyindee is the inspiration behind the eyepatch-wearing Street Fighter villain. He also happens to be a Muay Thai golden era legend.

Sagat was exceedingly menacing with his fists. The heavy punching KO specialist holds of fight record of 266 wins out of 317 fights with 151 knockouts in Muay Thai and kickboxing.

Like many Muay Mat fighters, Sagat went on to compete in boxing. He fought a total of 14 boxing bouts with 12 wins and 8 by KO.

His other accolades include 3 Lumpinee titles, 3 Rajadamnern titles, and an award for the Best Ram Muay. Sagat is definitely one of the most influential Muay Thai fighters of all time. This 1993 “Fighter of the Year” holds many accolades including the Lumpinee champion titles in 3 weight divisions with multiple successful defenses.

Wangchannoi was a technically-skilled but also strong fighter with powerful punches to boot. He holds wins over top-tiered Muay Femur’s like Karuhat Supawan, Kaensak Sor Ploenjit and even the GOAT himself, Samart Payakaroon.

One of his most legendary feats is his round-1 KO win over Namkabuan Nongkee Pahayuth. His devastating left hook ended the fight in just 33 seconds, earning him the nickname, “33-second puncher” (Thai: ไอ้หมัด 33 วิ).

Wangchannoi holds a win rate of 267 victories in about 300 fight appearances. Saengmuangnoi Loogjaopormahaesak aka Samson Isaan aka Samson Dutchboygym is a Golden Era legend and one of the era’s best heavy punchers.

Samson has a relatively short stint in Muay Thai from 1988 to 1994 before  after switching to boxing full-time. A brief stint but impactful Muay Thai career. Samson won the Lumpinee Bantamweight title, the Rajadamnern Junior Bantamweight title and the super prestigious 1991 “Fighter of the Year” award.

Samson is best remembered for his time as a boxer where he was undefeated at 43-0 (34 KO/TKO wins) for a decade from 1992 to 2002.  He defended his WBF Junior Bantamweight title for an unbelievable 38 times against international challengers. Veerapol Sahaphrom is a famous Muay Mat from the golden era. He was a three-time Rajadamnern stadium champion with fast, wild and heavy punches. It’s often “goodnight” when you catch one of his heavy swings.

After about 6 successful years in Muay Thai, Veerapol transitioned to boxing in 1994 when he could no longer find any opponents. He gained the WBA and WBC Bantamweight world championship titles, defending the WBC belt a stunning 14 times in his time as a boxer.

His fighting nickname was “Solemn-faced Tiger” (Thai: พยัคฆ์หน้าขรึม). Veerapol was a dangerous man in the ring, tearing down his opponents with no expression. Anuwat Kaewsamrit is one of the hardest punchers and best Muay Mat in the history of Muay Thai. The “Iron Hands of Siam” packed megatons of devastation and destruction in his two hands and low kicks. He was also known as the “Killer with curl eyelashes” (Thai: เพชฌฆาตขนตางอน) for his long lashes.

Anuwat holds a number of notable KO victories over opponents like Singdam Kiatmoo9 (two KO wins), Lerdsila Chumpairtour and Liam Harrison. Between 1998 to 2010, he won the Rajadamnern stadium champion title across 5 weight divisions. He was a highly-decorated fighter with a total of 12 elite championship titles of the highest honors during his career.

The retired Muay Mat is also the recipient of the coveted Sportswriters Fighter of the Year award two years in a row in 2003 and 2004. By the time he retired, Anuwat achieved 108 wins with 61 by way of knockouts. Rodtang Jitmuangnon is one of the most well-known Muay Mat today. He is the reigning One Championship Muay Thai Flyweight champion with 3 successful defenses to-date.

“The Tank” is a the pinnacle of fighting aggression, never backing down from head-to-head confrontations. In fact, he will keep pushing and moving forward because he is not afraid to brawl. This is a dangerous man who throws each punch with very bad intentions.

He went on an 11-fight winning streak from 2018 to 2020 before a decision loss to the great modern Femur, Kaonar PKSaenchaiGym. He has since avenged the loss in a closely-contested 5-round fight in October. Kulabdam Sor Jor Piek-U-Thai, nicknamed “The Executioner”, is a ruthless killer in the ring. He’s not the most technical or skilled fighter. He’s not here to impress the judges and outscore his opponents. Kulabdam is a hunter always looking for the kill. Each time he enters the ring, you know a war is about to follow.

He is a Lumpinee, Thailand and Channel 7 champion, 3 of the most prestigious titles in Muay Thai.

Between 2016 to 2017, Kulabdam went on a rampage going undefeated for 12 fights before MuangThai PKSaenchaiGym ended his streak. Kulabdam won 9 of those 12 fights by KO, all within the first 3 rounds.

This year (2020), Kulabdam knocked out this generation’s top fighter, Sangmanee with a clean left hook in round one. His heavy punches are clearly no joke especially in MMA gloves.

2 thoughts on “Muay Mat: The Heavy Punchers of Muay Thai”