If you want to be the best, you need to learn from the best. For the first installment in my new “Muay Thai Fighter Tips” series, I interviewed the renowned UK Muay Thai coach and former two-time world champion, Damien Trainor.

With about 2 decades training and competing professionally, including multiple periods living in Thailand, Trainor commands a wealth of knowledge on Muay Thai. He is widely recognized as one of the best striking coaches today. Born in 1980, Damien Trainor belonged to the early batches of hardcore UK Muay Thai fighters who arrived in Thailand in the 1990s to train and fight in the motherland.

Trainor started training at 14 and turned pro in 1996 when he was 16. He received a measly 25 pounds for his first full Muay Thai rules fight but there was no looking back.

Trainor went on to capture the British title just one year later, as well as a few European titles before he made his way to Thailand to live, train and fight.

Over the course of his extensive career, Trainor captured 4 European titles as well as the WMC and IKF world championship belts. But for the UK legend, the most valuable takeaways from his career are less tangible. He says,

“The biggest accolades I have are the stories and experiences that I’ve gained during my time competing.”

Trainor has a number of memorable bouts on his record, taking on Thai opponents like Wangchannoi Sor Parangchai, Kaewklaa Kaewsamrit, and Rungravee Sasiprapa. The one that stands out is his 2012 fight with Tawatchai Budsadee which has attained legendary status.

In their much-talked about first meeting sanctioned by UKMF, both fighters put up an absolute show-stopper. 5 exciting rounds later, it went to the judges scorecard and Tawatchai’s hand was raised even though many believed that Trainor was the victor.

Turned out that even though two out of three judges scored in favor of Trainor, the senior judge overturned the decision and awarded the win to Tawatchai. In a twist of the event, that decision was overruled on the same night and Trainor walked home with the win but not without much controversy and argument online.

Both competitors were brought back for a rematch a couple of months later. The English fighter set the record straight on the second occasion with three 8-counts on Tawatchai and a dominant victory.

Since he turned to coaching full-time, Trainor has helped train top fighters around the world that compete in promotions like UFC, Glory, Lion Fight and many more.

Read on as he drops some knowledge bombs on training and fighting in our interview below: A prolific content creator, Trainor regularly shares Muay Thai tips across his social media channels and website. Many look to his tutorial videos for drills and executing techniques correctly.

Here’s how he feels about learning Muay Thai online,

“I don’t think anything can really compensate being in a gym with an experienced team around you. But … for some, this isn’t an option so online tutorials are the next best thing. It also seems to be the next evolutionary stage as the internet is bringing the world closer together. “

Trainor has produced four online courses on Warrior Collective that cover beginner drills to more advanced-level training. They are valuable, structured training resources for those looking to level up their skills.

Trainor shares more about the courses,

“I’ve got four now and each one offers something different. The one I’ve just released is developing world class striking and it’s basically a beginners volume where if you’re looking to start training then this will teach you the techniques from the ground up. It’s also good for new coaches looking for alternative ways on how to teach things.

“I have a solo training volume which gives people drills to do on the bag. So many people don’t really know what to do, so this gives drills to help improve their game. I have two more which are a little advanced called fighting concepts and the fight game. These go over a number of pad drills, sparring drills, footwork drills, defence & counters and much, much more. They’re definitely worth checking out if you’re looking for more ideas. “

Online Muay Thai courses offer a lot of value, allowing practitioners to train at home anytime. They often also cover details on techniques that may be taken for granted and not receive the same attention in a gym setting. This is where supplementary resources such as Trainor’s courses come in and fill the gap.

On Training in Thailand For many Muay Thai fighters and recreational practitioners, training in Thailand is the next desired and logical progression. The country hosts daily events, the most elite fighters and what many consider to be the best Muay Thai camps in the world.

If you are sitting on the fence about taking a Muay Thai vacation, Trainor makes a point on why you should consider taking the leap,

“I think now outside of Thailand there are a number of top trainers that have great knowledge about Muay Thai. That’s simply because they’ve spent long periods in Thailand or have visited regularly to help grow their knowledge.

“However, the added bonuses you have in Thailand are you only have to train. You don’t have to go to work in the morning then go to train at night. You can focus solely on training. Also if you’re in a gym that has a lot of Thais then everyone you’re training with will be technically sound. Which actually helps aid in your progression as you’re seeing things being done correctly. “ With more than 2 decades training and coaching Muay Thai, Trainor has gone through loads of boxing gloves, shin guards and heavy bags to know what the real deal is. Here are some of his favored gear:

“Glove wise I really like the TWINS BGVL6. They’re well padded which is something I look for when it comes to gloves. With the shin guards I’ve actually had the same pair for over 10yrs which are the top king empower. They’re light, comfortable and well padded. “

If you are looking to set up your own home training corner, here’s what Trainor recommends,

“For home training I’d probably recommend a banana bag. They’re relatively light so won’t take much putting up. They’re also long so you can work all your techniques from striking low to high.” 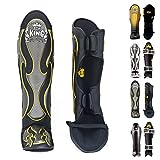 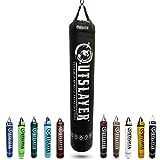 Unlike boxing or mixed martial arts, there is less emphasis and obsession over an undefeated record. Most Muay Thai fighters are in it to compete in as many fights as possible, motivated either by the financial incentive (Thai fighters) or just a love of the sport. Trainor tells us,

“My record isn’t squeaky clean as I never took the easy route, I often fought above my weight just so I could fight and fight against good names and I never had opponents picked to suit my style. I’ve won on points, I’ve ko’d people, I’ve stopped people with cuts but on the flip side I’ve also lost on points, I’ve also been KO’d and I’ve also been stopped with cuts. Everything I give to my students is from experience and hard lessons learned in the ring.”

For those who are just starting out as a professional fighter and looking to make a name for themselves, Trainor believes that it is most beneficial to chalk up the experience by fighting as much as possible. He shares,

“Too often I hear about people wanting 6 to 8 weeks to prepare for a fight or they want every last detail about their opponent. When you’re at the start of your career you should be ready to take a fight at a couple of weeks notice. This is what builds up your experience and reputation. For a stage I was fighting every 10 days in Thailand, it wasn’t nice but it was valuable in my career. As you get more experienced and the fights get bigger then you can have joys of a fight camp. Be ready, be focused, be determined and train hard.”

For daily tips, fight highlights, tutorials, and everything related to Muay Thai, you will do yourself a great favor by following Damien Trainor or Facebook or Instagram -if you haven’t done so already.

His blog has been a great source of inspiration for me when I just started out training and also running this website, simply because it’s one of the best Muay Thai resources out there. It’s like a goldmine for all Muay Thai or striking fans. Go check it out now!

⁣LESS PROFICIENT & MORE PROFICIENT: Even though the push kick (or teep) is a kick used to to keep the opponent away, you still have to remember that it is a strike. ⁣ ⁣ LESS PROFICIENT: If you look at this video you’ll notice it’s more of a shove as opposed to a strike. It also uses the whole of the foot as opposed to the ball. The reason why these aren’t the best methods is the shove is slow, it’s also not going to do much against an opponent pressing forward or attacking. Also using the whole of the foot means the force of the move is spread out a bit which means it will hurt the opponent far less.(there is a time to use the flat of the flat off but that’s striking a different part of the body and looking for a different result) ⁣ ⁣ MORE PROFICIENT: Watching this video you’ll notice it’s a little faster than the previous one. This isn’t because I chose to do it faster but because it’s more of a stab as opposed to a shove. This means it’s thrown with a little more force so it can easy stop a opponent coming forward or attacking. I’m also striking with the ball of my foot. This means that the attack is much sharper at the force is compressed in to a small area. Try and think of this example, if I got a flat shoe and slapped you around the face with it then got a stiletto and hit you with the same force….which is going to sting a bit more? ?‍♂️⁣ ⁣ If you’re interested in learning everything from the beginning then checkout my 4th full length instructional Muay Thai Training – Developing World Class Striking. This is now available on the @warriorcollective’s market place (link in bio). In this volume I go over the basic mechanics of how I develop a student from the ground up….along with a number of ways of how to put techniques together which will help improve your sparring. ⁣⁣⁣ ⁣⁣⁣ Head over to the @warriorcollective market place to check it out. (Link in bio) ⁣⁣⁣ ⁣⁣ Any questions please fire away ??⁣⁣ ⁣ #muaythai #mma #kickboxing #boxing #fitness #bjj #jiujitsu #ufc #martialarts #kstarlegacy #karate #wrestling #thaiboxing #training #fight #fighter #grappling #workout #judo #k #mixedmartialarts #damientrainor #selfdefense #taekwondo #nakmuay #motivation #