One of the things that Boxing and Muay Thai share, aside from the punching techniques, is the gloves. Both sports share what most people would call the same kind of glove. In this article, we explore the difference between Muay Thai gloves vs Boxing gloves.

While they are definitely very similar, each sport’s gloves are slightly different. These differences mainly have to do with how the hands themselves are used in the sport. Knowing the key differentiations can help you decide on the ideal gloves.

Let’s first look at the history of the two types of gloves before we delve into their differences:

There is evidence of fist fighting dating back to 3000 BC. Historians trace sportive boxing back to around the 7th century BC during the ancient Greek civilization. It was first introduced in the Olympic games in 688 BC.

Boxers wore “himantes” for protection of their knuckles and hands during this period. Himantes are straps of ox hide leather which wrapped around the hands much like modern hand wraps.

These later evolved into the “cestus”. Cestus were filled with iron plates or fitted with blades or spikes. They were worn to inflict more damage unlike modern boxing gloves whose primary purpose is for protection.

Bare-knuckle boxing was reported in the late-17th century in England. Modern rules like rounds and not striking a downed opponent were introduced during this period. Hand mitts resembling boxing gloves were first introduced all the way back in 1743. An Englishman, Jack Broughton introduced “mufflers” in order to help make training/sparring safer.

Broughton was a bare-knuckle boxer. He was credited for formulating codified rules for boxing. He is also widely recognized as the “father of English boxing”.

Boxing gloves allowed boxers to punch to the head more often. This is because bare-knuckle punches to the head can cause not only skull damage but also lead to many hand injuries. The bones in the hand are small and comparatively weak when compared to the durability and strength of the skull.

The first-ever recorded use of boxing gloves in competition was in 1818. This took place in France between two English boxers. Boxers still chose to fight with bare knuckles until 1865 when gloves were mandated by the Marquess of Queensberry Rules.

Boxing gloves started out much thinner and more compact at around 2oz. They eventually became the larger versions we know today with increased emphasis on safety.

Competition boxing gloves are usually 8oz, 10oz or 12oz depending on the weight class and the promotion. During the 16th century, Muay Thai evolved from its original intended purpose for battlefields.  Soldiers honed their skills and used their abilities for sport.

There are records from this period that indicated the use of “powder-coated unbleached cotton thread” to wrap boxer’s hands.

Hemp ropes known as Kard Chuek subsequently replaced the cotton threads for competitive bouts. The ropes protected the fighter’s hands kind of like hand wraps and while making it easier to cause cuts on their opponent’s.

In 1928, a fight was sanctioned between a Thai boxer and a renowned Khmer boxer from the Cambodia. The bout ended in round 3 when the Thai dropped his Khmer opponent with a string of punches.

The Khmer fighter died from his injuries on his way to the hospital. The Thai Ministry of Interior put a ban on Muay Thai ropes fighting and mandated the use of boxing gloves. (Source) The differences between Boxing gloves and Muay Thai gloves are fairly subtle but important to note. Here’s a comparison based on the key attributes:

The most distinct difference between Boxing gloves and Muay Thai gloves is the padding. In Boxing, the only strikes are punches. This leads to padding concentrated around the knuckles.

Muay Thai technique include kicks, knees, elbows and especially spinning backfists being added to the equation. With these techniques in play, the side of the Muay Thai glove takes much more impact and thus needs more protection.

Muay Thai gloves tend to have a more uniformly distributed padding around the knuckles, back of the hand.

The compact design of boxing gloves makes it so that the hand is almost always in a fist or close to being one. This differs in Muay Thai where hands are more relaxed and less clenched when not throwing punches.

The wrists on boxing gloves also tend to be thinner and tighter, at least on Velcro gloves. This helps to help maintain a stiff wrist while striking.

Muay Thai gloves typically have short cuffs  and are not as tight. This allows for more flexibility albeit at the expense of less wrist support.

Clinching features prominently in Muay Thai. Muay Thai gloves are relatively more flexible around the wrists to facilitate clinching. This contrasts from the stiff wrist construction of boxing gloves which helps in providing added support.

Boxing gloves force the fingers in a more closed position. Muay Thai gloves do not close the hand to the same degree and have a or open palm. This helps to control the head and arms in the clinch.

Muay Thai Gloves vs Boxing Gloves: Which Should You Get?

While there are subtle differences between Muay Thai gloves vs Boxing gloves, they are just about optimization.

Most Muay Thai gear manufacturers still just call their gloves Boxing gloves, even if they are made in a Muay Thai style.  If you want to get the most efficient gloves, then be more specific about what you buy.

If you are training in Muay Thai, most Boxing training gloves will suit your needs just fine and the same vice versa. Two Thai brands that are commonly used in boxing are Fairtex and Twins Special. They are know for their high quality and affordable prices.

If it doesn’t matter to you, then go for what suits your needs and what you think looks the best. 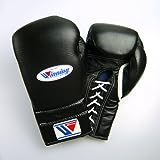 If you want the best of the best, top of the line boxing gloves, then Winning is the brand.

These boxing gloves are made in Japan to the highest of quality possible. Winning gloves use truly premium materials and paired with flawless craftsmanship. They provide optimal shock absorption with a soft impact for wearers and their sparring partners.

The only barrier for complete market domination is the price. Winning boxing gloves range from about 400 USD and up but anyone able to afford the price swears by them.

Winning Gloves are worthwhile investment for those considering taking up boxing seriously for the long term.

Cleto Reyes manufactures “Mexican-style” gloves. They are proudly “hecho en Mexico” (made in Mexico) with a classic boxing gloves silhouette.

Mexican-style gloves are also known as “heavy hitters”. This is because they allow you to punch as hard as you want while minimizing hand injury.

Many people consider Cleto Reyes professional boxing gloves to be among the best in the world. They are priced above the Thai-made gloves but the quality difference is apparent and will last longer.

These are about as good as boxing gloves will come. 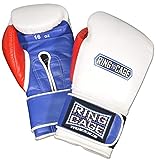 Ring2Cage C17 gloves are also known as Japanese-style gloves. They are modeled after Winning gloves. They come in both lace-ups and hook-and-loop options with many colors to choose from.

The R2C boxing gloves are very gentle on the hands and comes at a-third of the price of Winning gloves. They will not be mistaken for Winning but the quality and protection is solid.

If you want good-value boxing gloves. definitely consider these.

These are for you if you want a pair of Mexican-style boxing gloves without breaking the bank. You can always expect high-quality gloves from Fairtex but they will be nowhere near the levels of Winning and Cleto Reyes.

Fairtex is a top-tier Muay Thai gloves brand from Thailand. The BGV9 is their take on the classic “Heavy hitter” boxing gloves. This means that you can expect generous knuckle padding, extended wrist with an emphasis on wrist support.

The BGV9 comes with a grip bar unlike their flagship BGV1 Muay Thai gloves. That’s something to consider as a number of users highlighted the lack of the grip bar on BGV1.

Like most Fairtex gloves, they hit hard due to the dense padding which makes them unsuitable for sparring. They are best used for heavy bag and pad work.