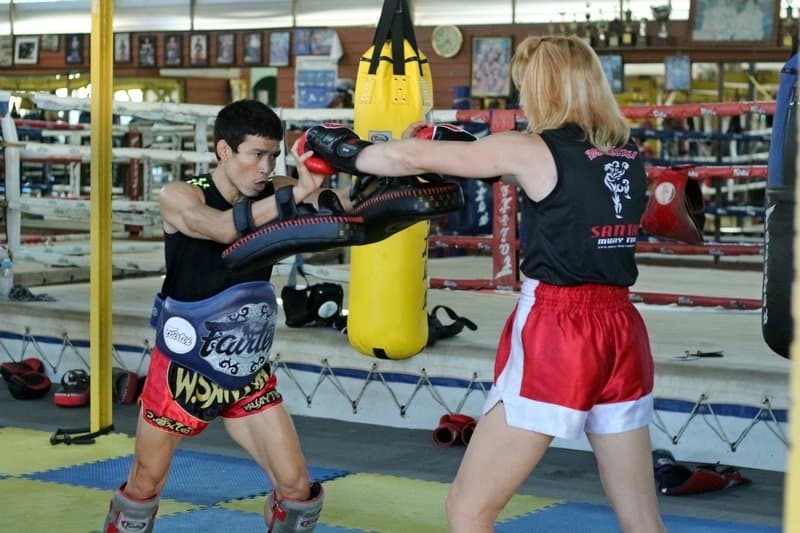 Farang* fighters  who make their way to Thailand are often dismayed to discover that their technique is regarded poorly. It’s not their fault, it’s just that they’ve learned from trainers outside of the motherland.

Neither is it their trainer’s fault; in fact, if it weren’t for the passion and dedication of trainers in the western world, Muay Thai wouldn’t have the following and participation that it enjoys outside of Thailand.

It’s just that, like Chinese whispers, the further away from the origin you get, the more distorted the message becomes. Muay Thai technique originated in Thailand, and Thailand is where the best Muay Thai is, always has been, and always will be.

Muay Thai is a fascinating study in the acquisition of finely coordinated muscle movements, also known as motor skills. The great fighters often move in ways that the rest of us struggle to comprehend, let alone imitate.

Sometimes the great fighters simply do what the rest of us can do, but with superior balance and timing, efficiency and accuracy: in other words, they have a higher level of skill.

Motor skill learning is the process by which movements are executed more quickly and accurately with practice. With sustained practice, the round-house kick, at first so awkward, slow, and utterly different to kicking a football, becomes a graceful, powerful movement conducted with automaticity in both offensive and defensive combat situations.

Every Muay Thai practitioner knows that the secret to getting better at Muay Thai is practice: what they may not know is that practice doesn’t just make the movements easier; it actually changes your brain.

In learning a motor skill, you generate new neural pathways specific to that movement. A neural pathway is a series of connected nerves along which electrical impulses travel in the body, starting in your brain, travelling down your spinal cord, and into the relevant muscles.

The more you practice, the more robust and refined that neural pathway becomes, the brain changes, and the movement becomes automatic. In neuroscience, the automaticity of movement is known as “stabilization through consolidation.”

Practice, therefore, makes neural pathways stronger, but practice on its own doesn’t make for good technique. If you practice poor technique over and over again – think of the fighter who always  flares their elbows before they punch, thus telegraphing the offense to their opponent, increasing the time it takes to execute the movement, and dissipating force sideways rather than forwards into the target – then the poor technique becomes ingrained. How hard is it to change this suboptimal technique?

I am about to find out.

After a hiatus from Muay Thai, I returned to Thailand. I’ve not trained for more than six months; a combination of injury and disillusionment with Muay Thai opportunities outside of Thailand saw me hang up the gloves in favour of competing activities which promised to fill the void but ultimately didn’t. The rat kept gnawing, and I found my inevitable way back to Thailand.

I knew I would be rusty; the iconic movements of Muay Thai, no longer familiar through daily practice, would be awkward and strange. Would I still be able to execute them with any kind of economy and grace?

Perhaps, after a rest so long, the movement patterns would be so stale and forgotten, that I could use my return to the motherland as an opportunity to unlearn poor habits and suboptimal technique: could this be a fresh, unprecedented opportunity to improve my technique?

The old theory of neural learning was that you couldn’t erase neural pathways; you could only create new ones. So if you flared your elbows and prematurely rotated your wrist when punching, those neural pathways affecting the suboptimal movement pattern were believed to be there for good.

You could learn better punching technique but only by creating new neural pathways. According to the old theory, you’d have two different pathways competing for use, making it hard to eradicate old habits.

However, recent research (Wymbs, Bastian, & Celnik, 2016) has shown that motor skills can be modified when the neural coding of previous patterns can be nullified or erased by “counter learning”.

What this means is, if a trainer stops you from flaring your elbows every time you punch, the previously consolidated neural pathways you used when executing a punch enter a temporary state of Instability. The state of instability can cause the neural pathways change and to undergo re-stabilization.

In other words, in the process of consolidating better technique, you are actually losing old habits and gaining new ones.

My first-week training with the legendary fighter and trainer, Manasak Pinsinchai, at Santai Gym (in Chiang Mai) was highly instructional. He adjusted my stance, the amount of flexion in my knee, the position of my arms and my shoulders. He changed my punch – elbows in, no looping motion, power from the shoulder, and stand upright – as well as my kick.

I always liked my kicks, and avoided punching but Manasak set the record straight. “Your kicks need more power, and you need to adjust your distance. Also, you can punch: you’ve got to punch more, and you can do that by knowing where your feet are and moving them!”

After just two weeks of modification of nearly a decade’s worth of habit, I have a lot of work ahead of me: lots and lots of practice. Crucially, I have guidance and feedback: Manasak is fanatical about technique and generous in the amount of correction he offers when coaching. I listen carefully, and I imitate what he shows me during pad work, and afterwards in front of the mirror and on the bag. I find myself totally subsumed in a massive learning project. Training is utterly absorbing.

So far I am able to make adjustments. Manasak confirms this with an emphatic “gooood!” He tells me that sometimes I perform a movement with good technique, and at other times, I slip back into poor form.

He gives a comic and unflattering impersonation of the poor movement patterns he is seeking to eradicate. Clearly, not yet reconsolidated, my old habits flare-up. Sometimes I feel like the poor technician is lurking inside me, looking for elbow room.

Plenty of trainers have tried to influence my technique in the past, with varying levels of success. Often I was too attached to my old ways to change even though I desperately wanted to improve: human psychology is complex, and, ironically, sometimes really wanting to improve has the effect of paralysing the mind and hindering the learning processes.

This time, however, I’m not attached to my old movement patterns: it’s not that I have forgotten how to move – the neurological pathways are still there – it’s just that, in all that time off, I seem to have forgotten my attachments to them. I am fresh, and I am open to learning new things.

I have to be vigilant: it’s inevitable that at some point I will slip back into my old patterns of movement when I’m not concentrating, or when I’m under pressure. With time, however, and with repeated exposure to high-pressure situations – such as fights – where I successfully maintain my new, better technique, then the neural pathways of my improved technique become more and more ingrained; they will become my default technique.

Determined fighters have, since the dawn of time, travelled far and sought good trainers to help them improve their fighting. The philosophy is simple but effective: find a good trainer, and work hard. Now, thanks to developments in neuroscience, we have just a little bit more insight into the mechanisms at work when it comes to improving technique.

*Farang is a Thai term that refers to Westerners. More precisely, farang means “caucasian”, although I am using it here to refer to fighters who come from a non-Thai background, most typically a western country.

Editor’s note: The author wishes to acknowledge Stephan Oehler for his editorial assistance on this article.