The Muay Thai music that accompanies the fights is known as Sarama (สะระหม่า). This style of music is a traditional music originated in the royal court of Thailand. It has spread to be used in other occasions, most notably in Muay Thai, where it is referred to as Phleng Pi Muay Thai (เพลงปี่มวยไทย).

In Muay Thai, Sarama is played by an ensemble that typically consists of 4 musicians, referred to as a Pi Chawa Klong Khaek ensemble. The instruments include 2 Thai drums (Klong Khaek กลองแขก), finger cymbals (Ching ฉิ่ง) but the sound is most characterized by the nasal pitch of the oboe wind instrument (Pi Chawa ปี่ชวา).

Sarama music as a soundtrack to the violence of Muay Thai can be an acquired taste. The true-blue Muay Thai fans love it, but some fight fans are put off by it. These fight fans have even cited the music as the main reason that they don’t follow Muay Thai actively.

For those not familiar with it, especially listeners attuned to western musical scales, Sarama can indeed sound dissonant and unpleasant to the ears. It eventually grows on most fans of Muay Thai but still isn’t something that one listens to recreationally. (I personally don’t)

Sarama music is played from the onset, marking the start of the Wai Kru pre-fight dance ritual. The music continues until the end of the fight.

Under full Muay Thai rules, matches are fought for 5 rounds of 3 minutes each. Fighters start out slow in the first two rounds to feel out their opponents. The real action picks up in rounds 3 and 4 which is where the main scoring takes place.

There are dynamics to the Sarama music, and the tempo changes depending on the intensity of the fight. The music becomes more frenzied as the intensity increases, adding to the atmosphere and mood much as music does for a movie.

Sarama music is traditionally played by a live band in Thailand. This continues for most of the events in the country. Outside of Thailand, it is more common that a recording of the music is played over the speakers.

A 1999 Sarama recording by V. Music is the most-often used album for Muay Thai fights outside of Thailand. It is most probable that the music you heard while attending a Muay Thai event is this exact recording. 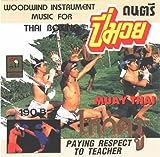 Sarama is improvisational music that musicians -led by the Pi Chawa player- make up on the spot like jazz or blues. You may even occasionally hear bits of familiar or popular tune thrown into the mix.

As the soundtrack associated with Muay Thai, many gyms outside of Thailand would play the Sarama music during training or sparring. In actual fact, it is never played in Thai camps where you are more likely to hear Thai or western pop music. (Thai disco music is a common choice)

Sarama, like the Wai Kru dance and the Mongkhon headband, are unique elements of Muay Thai that differentiate it from other combat sports. Learning to accept and respect these aspects of the sport can help to better appreciate Muay Thai and ensure that the traditions continue along with it.