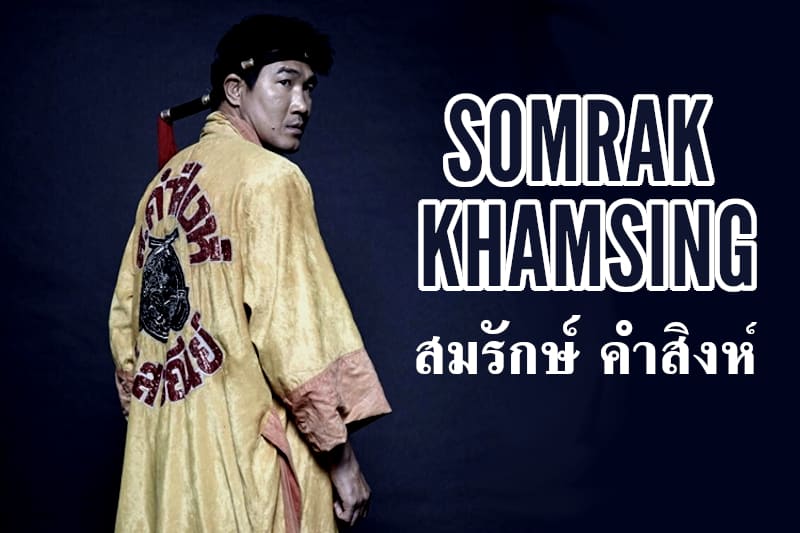 In sports, there are champions. Those who rise above the competition to excel and become recognized as among the very best.

Then there are those who rise to the level of legends and are clearly a cut above.

But even among legends, there are those who rise to the Mt. Olympus and are considered by peers and the public to be the king of their sport.

In Muay Thai, there have been a number of names who were able to rise to that ultimate level. Some of the very best strikers of all time belong to those select few and have perfected the art of 8 limbs.

Some of the names that come to mind are Samart Payakaroon, Saenchai, and Dieselnoi Chor Thanasukarn.

One more name belongs to this exclusive club even and yet was denied a chance to compete and win the sport’s ultimate prize even at his peak. That Nak Muay is none other than Somrak Khamsing – the uncrowned king of Muay Thai.

The irony of it all is the fact that Somrak’s biggest recognition came in another combat sport – amateur boxing! How that twist came about is an interesting fact that made his career both remarkable and unique.

Read on to learn more about this true Muay Thai and boxing icon. Somrak Khamsing grew up in the province of Khon Kaen, in the Isaan region of North-East Thailand. Born in 1973, he started training in Muay Thai from the tender age of 7. Starting at such a young age was typical of fighters in Thailand, who were usually from very poor families.

Children were groomed to be fighters very early on and Somrak was no different. At first, he only trained at home and didn’t train in any gym at all. He did his training at home with his brother, who was also into Muay Thai. It was also at the age of 7 when he started fighting.

Four years after he started in Muay Thai, Somrak moved to Bangkok. He first trained at the Sit Arane camp. After a while, he transitioned to the famous Jocky Gym, located in the district of Bangseu. There he stayed for a total of six years. Somrak achieved notable success as he developed his skills. He possessed one of the most incredible skill sets ever seen in a Nak Muay. His fighting style is that of a Muay Femur, which is known for being the most beautiful and graceful style in the art.

To say that Somrak was dominant was an understatement. His movement, fight IQ, ring control, reflexes and rhythm were remarkable. He was quick to establish himself as one of the best in the game. This was during the golden age of the sport which many consider to be the most competitive era.

For some time, he was the number one fighter in the Featherweight division (126 lbs.) in all of the major stadiums in Thailand. That’s a huge accomplishment any way you look at it.

Somrak is said to have only sustained 12 losses in around 300 Muay Thai fight appearances. Some of his notable wins include opponents like Chamuakpet Harpalang, Boonlai Sor Thanikul and Namkabuan Nongkee Pahuyuth.

Check out Somrak’s dominating win over Boonlai Sor Thanikul (a golden era legend and two-time Lumpinee champion with over 400 fights) in the video below:

The Uncrowned King of Muay Thai However, as the story goes, there was a problem and it involved the promoters. According to Somrak, the promoters did not want him to fight for an actual and legit stadium title.

The main reason being that he was simply too good for their fighters. Or maybe they thought that it was simply not worth a risk. So instead of giving him a shot, he was prevented from doing so.

Fight promoters in Thailand have never been very fond of overly dominant fighters as they are bad for gambling by skewing the odds. This is one of the reasons why bouts are always very closely matched in the elite Muay Thai scene.

To put it simply, Somrak was never given a title shot as no gambler would bet against him.

It was the same situation in the next weight division, Super-Featherweight (130 lbs.). Somrak was again a top contender for the major stadium titles. Many even consider him to be the top fighter in the division. But he was once again denied a chance to even challenge for any of those prestigious titles.

The promoters could just not bring themselves to let him challenge for a title. They feared that Somrak was too good for their own fighters and would likely wrestle the titles from them. Faced with this reality, Somrak shifted his focus to boxing instead. Somrak made the switch to amateur boxing and enjoyed considerable success. He competed in the 1995 South East Asian Games held in Chiang Mai and won the Gold medal in the Featherweight division.

Fun fact: he adopted the “Somluck” alternate spelling for his name during this period when he was competing in boxing. It was believed that he did it for the literal reason to have good “luck”. “Somrak Khamsing” is the more accurate translation of his Thai name (สมรักษ์ คำสิงห์).

He also competed in the Asian Games twice, winning the gold in both tournaments. In the 1994 Hiroshima Asian Games, he won the gold medal in the Featherweight division. And in the 1998 edition of the games held in Bangkok. He repeated the feat in the same division.

In his boxing career, Somrak was able to compile an impressive overall record of 150 wins and 50 losses. But of course, his greatest achievement was on the biggest stage of all – the Olympic Games. Somrak eventually achieved something that transcended boxing, Muay Thai, and even sports in general. This happened in the 1996 Olympic Games held in Atlanta, Georgia, USA. He captured the gold medal in the Featherweight division.

This also happened to be Thailand’s first-ever Olympic gold in any sport, so you can imagine that it was a huge deal in Thailand at the time.

Somrak came home and was welcomed as a national hero by the Thai people. He achieved a level of popularity and superstardom that he was not able to do in Muay Thai.

It was at the Olympic Games in Atlanta where he made his mark, but he also competed in other editions of the games.

Somrak was also a part of the 1992 Barcelona Games, the 2000 Sydney Olympics, and the 2004 Athens Olympics. He competed in the Featherweight division for all of those games. However, his boxing journey came to an end with his loss in the first round of the 2004 Olympics in Athens.

Forays Into Acting and Singing

Being a popular figure in Thailand allowed Somrak to make ventures into both acting and singing. This quickly became his main profession while prizefighting became an occasional extracurricular activity.

His first acting  was playing the lead role in the Channel 7 tv series “Nai Kanom Tom” (1996) as the legendary Father of Muay Thai (See “History of Muay Thai” for more information). A fitting acting debut for the Muay Thai legend.

He has also starred in some Thai action movies and has even acted with martial arts superstar Jet Li in Fearless. The scene was cut from the film’s international release but it was restored in a special version of the film that was shown in Thailand.

In 2006, Somrak also made his debut as a singer when he released an album and a music video and also performed at the Pattaya Music Festival.

Somrak is also notable for his role as a Muay Thai coach in the prison flick, “A Prayer Before Dawn”. Between 2000 to 2015, Somrak made a number of Muay Thai appearances on various occasions. They include the King’s Birthday events, Toyota Marathon as well as various -sort of- exhibition matches in Thailand and abroad.

He suffered a loss to American Nak Muay, Chike Lindsay via decision in 2013 in a visit to California. In 2015, he picked up a draw against Yodwanpadet Sor. Junlansen in a special “Boxing vs Muay Thai” match at Rajadamnern stadium in 2015. Somrak was only allowed to punch while Yodwanpadet was allowed the full range of Muay Thai. Check out the fight below.

In 2012, there was a rumor of a possible match-up between Somrak and kickboxer star, Jean-Claude Van Damme (52 at that time). The fight didn’t materialize, no surprise there. Somrak was a revered icon in Thailand and his popularity went beyond sports. He is also a military officer with the Thai Navy (Department of Civil Affairs). Still, he managed to fall on hard times and has even been declared bankrupt in 2018.

Somrak was a highly-paid fighter during his days, receiving purses of 180,000 baht and upwards per appearance. But like many Thai fighters with little to no  financial education, the money went as quickly as they came.

Some rumor that it is because of a huge gambling debt and it even caused him to lose the modest gym (Sor Khamsing Gym) that he set up in 2003 and where he trained future Muay Thai fighters. Modern living legend, Saenchai trained under Somrak at the Sor Khamsing camp at one point.

The legend himself has attributed the financial predicament to poor or lack of management of his finances during his years of glory. Somrak Khamsing is a true icon of striking. He made his mark in both boxing and Muay Thai. Even though he was denied a chance at Muay Thai’s ultimate prize, those who truly know the art of 8 limbs rate him highly very highly.

In fact, some even put him at the same level or at least close to the likes of Smart and Dieselnoi, just to name a few Muay Thai icons.

Whether he deserves such a lofty status may be up for debate. One thing’s for sure and that based on his skill set alone, Somrak is indeed worthy of both admiration and emulation as the uncrowned king of Muay Thai!