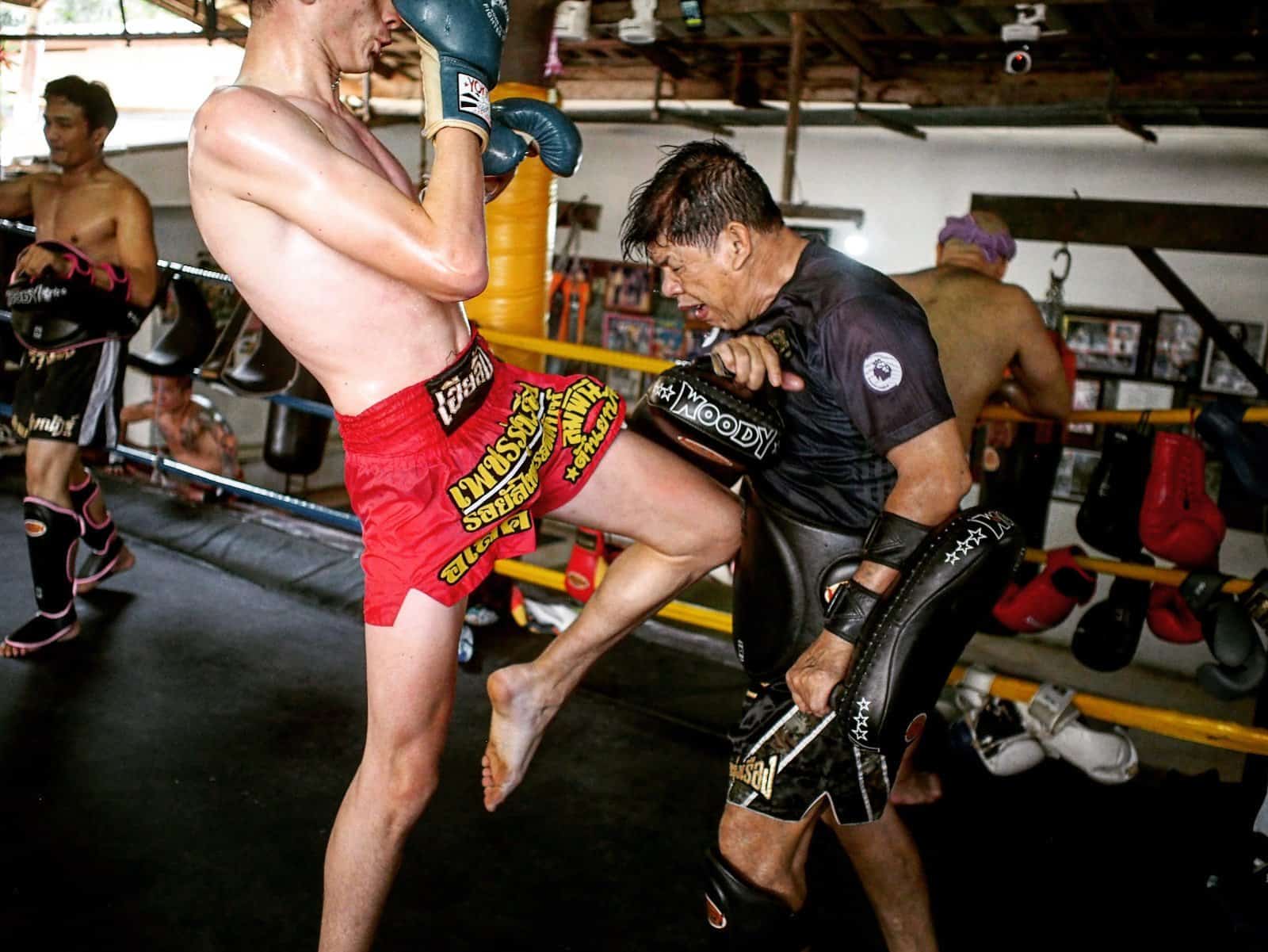 Muay Thai is known as the art of 8 limbs.

Hardcore fans and practitioners are very much aware of this and the reason behind it.

Beginners and newcomers to the sport, however, might be confused by the term and where it originated from.

How can such a devastating martial art be called an “art”? What do the “8 limbs” refer to?

Muay Thai is both a martial art and a combat sport. This means that practitioners need to follow a set of rules whether they are training, sparring, or fighting.

The rules restrict the moves of a Nak Muay but also allows them to be free and creative with their movements and strikes.

It’s the reason why a gifted fighter is breathtaking to behold, with the ability to transition effortlessly from one move to the next.

And it’s where you can see the so-called “flow” that fighters who are in the zone are capable of. A deadly art form, but artful nonetheless.

That’s where the art in Muay Thai comes from.

Next comes the exciting part.

The 8 Limbs of Muay Thai

The 8 limbs of Muay Thai refer to the 8 weapons used in the sport. And these weapons are the parts of the body that are used for striking:

Let’s take a closer and more detailed look at each pair of weapons: In Muay Thai, the fists are used to throw different punches and are effective weapons in mid-range.

The punches are similar in mechanics and execution to those used in Western boxing. Of course, the intention is also to cause as much damage as you can to your opponent.

You can throw jabs, crosses, hooks, and uppercuts. Jabs, straights, and hooks are the most effective, with the uppercut the least thrown.

However, there is a difference in how boxers and Muay Thai fighters utilize their fists. The first is in how frequent they throw it and in how fighters prioritize punches as their weapons of choice.

In Muay Thai, punches are just part of a Nak Muay’s arsenal, while in Western boxing they are the only weapons at a boxer’s disposal.

Even though punches do not score as highly as kicks or elbows, they’re still excellent weapons to have, especially if you are an aggressive fighter.

Punches are also awesome to use as part of a combination, with a powerful kick following a punch or a punch feint. That’s why some of the top Nak Muays have fantastic boxing abilities and are very capable with their fists. The elbows are among the most distinctive weapons of Muay Thai. It helps separate it from other striking-based martial arts such as Kickboxing, Karate, or Taekwondo.

Sure, other martial arts also incorporate the use of elbows, but it’s nothing like how it is in Muay Thai. Elbow strikes are a huge part of a Nak Muay’s arsenal, especially in the clinch and in close-range combat.

Elbow strikes are the best weapons for close-range fighting. It’s especially useful in the clinch when punches and kicks are somewhat nullified by the proximity of the fighters to one another.

In such instances of infighting, the elbows are devastating and can inflict a lot of damage. You can use it to cut and slice up your opponent’s face, or better yet score a sensational knockout.

Variations of attacks using the elbows include the upward, horizontal, slashing, downward, and spinning elbow strikes. The knees are also signature Muay Thai weapons even though they are also used in other fighting arts like Kickboxing.

They are both flashy and entertaining to watch, not to mention deadly when able to connect solidly. It has the capacity to immobilize an opponent and even lead to a crushing knockout victory.

The presence of knees in Muay Thai means that practitioners are wary of ducking and having a very low stance. This is the reason for a fundamental difference with Western boxing, where boxers are able to duck and stay low even when close to their foes.

Knee strikes are often used and most effective in the clinch. You can throw a knee strike or several when you are locked with your opponent and maneuvering to get a better inside position.

There are variations to the knee strike as well and some of them are the straight knee, the curved knee, the diagonal knee, and the flying knee strike. While elbows and knees make Muay Thai distinct from other martial arts, its kicks are the most damaging.

The Muay Thai roundhouse is widely regarded as the strongest kick in any martial art. It uses the shins to strike and derives its power from the way it’s thrown.

Perhaps the best analogy of the Muay Thai roundhouse is that it’s swung like a baseball bat. The power of the kick is generated by the twisting hip and transferred through the leg and the shin.

To maximize the power of the roundhouse, you will need to throw the whole weight of your body behind it. The resulting explosiveness is not a welcome development for your foe.

At first glance, the roundhouse might seem like a simple kick to execute. But in truth, it takes lots of training for a practitioner of the sport to truly master how to throw it correctly.

Some of the most ferocious kickers in the sport have utilized the roundhouse to cause serious damage. They used their mastery of the kick to build fearsome reputations. Solid hits of the strike have caused broken arms, ribs, and plenty of knockouts.

Last but not the least is the teep, a thrusting motion that uses the ball of the foot to strike. It’s used both as a defensive and an offensive weapon and is often compared to the jab.

The teep has more potential to cause damage and disruption against your opponent. It’s best used as part of a combination or as a defensive counter.

The 8 limbs of Muay Thai offer a seemingly inexhaustible source of striking options and combinations.

Each of the 8 limbs of Muay Thai is worthy of a lengthy and in-depth study on its own. That just goes to show just how varied and versatile each of those weapons are.

One thing is for sure, though. With such a rich arsenal to choose from, Muay Thai practitioners can spend an endless amount of time studying and honing their skills in the sport.