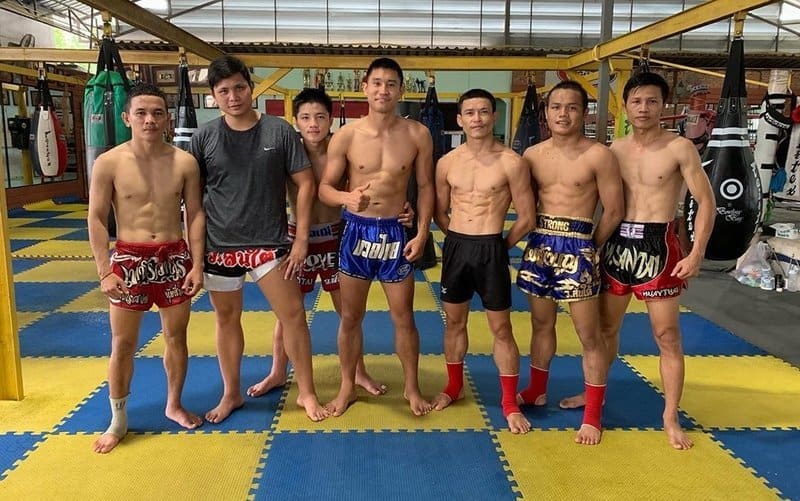 Santai Muay Thai Gym is one of the most notable and renowned gyms in Chiang Mai. It comes heavily recommended by my friends with a 4.9/5 review score on Google. Claire Baxter, our resident training specialist and 3-time Muay Thai world champion, shares her experience training at Santai.

Kay: When did you first train at Santai?

Claire: I first trained at Santai in December 2015 – January 2016. I was there for one month, and fought twice. I then returned in (May 2016- March 2018) and spent months at a time training and fighting there. I recently returned November – December 2019.

What made you decide on making Santai your home gym in Thailand?

I was about to quit muay thai. I had run out of opponents to fight in Australia – I seemed to have fought everyone in my weight range, and, irrespective of wins or losses, there were no further fight opportunities: 12 months went by with no fights.

I was just about to call it quits, when, on a whim, I googled “Thailand, foreigners, females, fighting”  I came across Sylvie Von Duuglas Ittu’s blog about foreigners – particular females- fighting in Thailand. It seemed like a place called “Chiang Mai” was the place to go.

From there, I googled “Chiangmai, muay thai, foreigners, fighting” and came up with a number of gym reviews. There were quite a few gyms that seemed to be both foreigner friendly and female friendly when it came to putting people in fights.

Most reviews were recommending the Chiangmai fight scene above the Bangkok fight scene for entry level fighting in Thailand. I then read a review that described one gym as “highly structured training”, so, I messaged that gym – Santai Muay Thai – and asked if they would put me in a fight. I got a reply the next day. “Sure, if you are good enough.” I like their honest reply, so I booked a four week training stay with them.

I got there, and the training was serious, hard, and enormously challenging from a skills point of view. They arranged not one fight, but two fights for me over that four week period, and revived my muay thai career.

After a few fights and a few months, they offered me a sponsorship deal. I was there, on and off, for three and a bit years, training full time and fighting. I gained incredible fighting opportunities – three opportunities to fight for World Titles – WMC and WPMF – so I am really glad that I spent that time at Santai.

The lure for me was the first rate training – the trainers are both highly skilled and excellent teachers – and the fight program. Santai Muay Thai got me fights both in Thailand and America.

Two sessions a day, 6 days a week.The morning session begins at 6am with a 4-10km run. Students then shadow, and then they do 3 rounds of pads with the trainers, and about an hour of bag work. (You may spar instead of doing pads, depending on the day, and what the trainer’s decide).

Afternoon training begins at 4pm, and you skip for about 20 minutes. There is a warm-up and stretching session that evolves into a guided shadow-boxing session. That goes for about 20 minutes, and then, students either work with a trainer (5 x 5 minute rounds) or do bag work until their trainer is ready to take them for their pad rounds. After pads, you do more bag work. You clinch at the end of the session, do skip knees or kicks in a group, and then you do core work and stretching.

Both morning and afternoon sessions end with 5-10 minutes of core work and stretching.

It’s tradition to have the day off before you fight, and to get a rub down at 4pm on the afternoon of your fight.

Intermediate fights have a slightly different program – although this depends on which trainer takes you onboard – and they often clinch for half an hour or more at around 3:30pm.

How’s sparring here like? Do trainers spar with students?

Some of the trainers do. In my last trip – November – December 2019. Both Manasak Pinsinchai and Pesangnuan Sanguanchai were sparring regularly with students. Kru Sak – Pimsiam Pinsinchai often spars students as well, and occasionally Thailand Pinsinchai will spar. Sparring any of these greats is an incredible opportunity.

Who are some of the more known fighters out of this gym?

All of the trainers had very impressive fight careers. The older trainers such as Phon Narupai and Vanlop Pinsinchai (twin brothers) were legends of the golden age. The famous fighting twins were celebrated “muay femur” (counter fighters) and they were were consistently ranked in the top 5 at  Lumpinee and Rajadamnern Stadiums.

Thailand Pinsinchai is a highly rated trainer, training a stable of Thai fighters as well as training foreigners. His own fight career is impressive: and he counts Rajadamnern and Lumpinee titles amongst his career highlights.

I’ve been standing next to him at fights when Thai people – muay thai connoisseurs – have paid homage to him and asked to have their photograph taken with him. Manasak Pinsinchai was #1 rank at Lumpinee (2015) and he holds belts from both  Rajadamnern, Lumpinee as well as WMC. Manasak is an active fighter.

Poye W. Santai, 20 years old, is an active fighter who, when his fight training allows it, also holds pads. He is currently ranked # 4 at Lumpinee and #5 at Raja.

The careers of each of these fighters is far more extensive than I have been able to describe here.

These trainers have been at Santai for at least two years; many of them for much longer than that. There are also some recent additions to the team who also have very impressive fight careers.

Are the trainers here good at giving instructions (in English)? Are they active in correcting techniques, giving tips on improving?

All of the trainers are very active in correcting technique and giving tips, both on pads and also, if the trainers happen to not be holding for another student, they will watch and correct your bag technique. There is a lot of feedback in sparring too, sometimes from more than one trainer at once.

The level of English proficiency amongst the trainer varies, but the trainers who don’t have a good grasp of English are often very good at showing you how to do things, so if you are open to more than one channel of communication, you will find that you get an enormous amount of valuable feedback.

Who would you recommend this gym to? A beginner? An intermediate? Or a pro fighter? How about someone just looking to lose weight?

I would recommend the gym to all of these categories. Beginners are looked after very well, and instructed with a lot of patience and attention to their technique. Intermediate fighters are challenged and their technique and overall training attended to.

Fight opportunities often materialize for hard working intermediate level fighters who display the ability to listen to the trainers and take on board technical advice. Pro fighters are provided with an excellent opportunity to get high quality fighters, and to train with top level trainers.

For the three-four years that I trained at Santai, there seemed to be a couple of people who trained at Santai with specific weight loss goals, and if I remember correctly, they made progress with these goals during their stay.

If you had to name one thing that would discourage anyone from training here, what would it be?

I haven’t got many criticisms to make, and the positives clearly outweigh any negatives: that’s why I spent three and a half years of my life there.

If I had one criticism, it would be that the clinch training is very high quality, but it is not always consistent.

Although I always had the opportunity to clinch with the beginners and intermediates students at the end of class, I wasn’t always included in the clinch training with the fighters: often I had to wait until another female fighter turned up and I could clinch with her.

Because there are not always female fighters of my weight and experience, this meant that there were periods where I did not get to clinch with experienced fighters. Sometimes when this happened, however, I would be lucky enough to clinch with a trainer, but only if they were available.

Where do you stay or recommend staying when training at Santai?

The gym has many accommodation options ranging from budget to more luxurious, and most of them are onsite or within walking distance to the gym.

Santai recently built new apartments with a pool (I would definitely recommend staying by a pool in the warmer months, say from March through to September).

Of course, you can stay anywhere in the area – there are lots of options waiting to be discovered when you are in conversation with the locals – although you might like to book in with the gym for a week or two to scout out the area if you really don’t like the multitude of accommodation options they have on site at Santai.

The cheapest accommodation I have found in the area I sourced through the gym.

What’s the easiest way to get to old city or night bazaar from Santai?

You can hire motorbikes from the gym. There is also a good place within twelve minute walking distance from the gym to hire bicycles at a very affordable price – “Kru Nan Bike For Rent” https://www.facebook.com/Kru-Nan-bike-for-rent-1757053400981619/ )

It’s a direct 20km commute continuing from the SanKamphaeng main street – the main street is a 6 minute walk from the gym-  into the old city of Chiangmai. Many people ride their rented motorbikes, or use their phone to order a Grab (similar to Uber). It’ll cost you less than 200 baht if you sign up to Grab pay, or a bit more if you pay the driver in cash.

If you are on a budget, or want to travel with the locals, the public transport is a white Songthaew which departs from the main street of San Kamphaeng. It costs just 15 baht which probably makes it the cheapest transport I’ve ever come across. It drops you off at a market, and from there it’s about a 10 minute walk to the old city.

To get to the night bizarre hail, from the Chiangmai city area, hire a red Songthaew at a negotiated price, or for a faster, slightly more expensive ride hail, a tuk-tuk – a three wheeled, open-air taxi.

There are evening fights at the stadium in the night bizarre, and beginner and intermediate level Santai fighters often get matched there. When a Santai student is fighting, the gym will transport any would be spectators directly to the night market (the ride is free; you will have to pay entry to the fight which is about 500 baht)