I spent 3 hours reading reviews from experts and users. In summary, this is what combat sport practitioners think about the Twins Special BGVL-3 Muay Thai Boxing Gloves:

– Majority of reviewers commented that the extra padding gives ample protection all around the fist, especially at the knuckles.

– Quite a number of users indicated that the BGVL-3 gloves are very durable and have lasted for years.

– Several reviewers noted that the soft padding means less risk for injuries to partners during sparring, which make them suitable as sparring gloves.

– A few reviewers cited that the BGVL-3 gloves are designed for Muay Thai, so have a naturally open hand for clinching and catching kicks.

– Many users complimented on the high quality of Twins gloves which are made using 100% genuine leather.

– Some reviewers mentioned the huge range of colours in the BGVL-3 collection.

Reason Not to Buy:

– A few users felt that the gloves aren’t designed for long fingers, where their fingers were pushing against the interior padding. This may be due to the thick padding used.

– Like with many other brands, several people commented that it was a little uncomfortable when breaking in; the BGVL-3 requires some break-in time.

– Some reviewers felt that the gloves might be a bit bulky for smaller-sized people due to the extra padding.

– There were a few comments on the wrist cuff not being tight enough, especially for people with thinner wrists.

The trusted brand at Rajadamnern Stadium as well as Muay Thai gyms across Thailand, Twins Special is the to-go brand for beginners and elite fighters alike. The all-round padding used is known to be the most protective, making them the top choice for those new to fight sports. Design-wise, they are not the most fashionable or stylish but they get the job done and there is a wide range of colors to choose from.

The most common criticism made of the BGVL-3 is always that they look a little too big and bulky. A 14oz Twins would look like a 12oz or even 10oz Fairtex BGV-1. It’s not completely a bad thing as the extra bulk make them perfect for defense in sparring.

Twins Special BGVL-3 Muay Thai Boxing Gloves are the brand’s flagship glove model. They are also available as BGVLA2 Air Flow and FBGV which are the breathable and fancy model collection respectively. Both the BGVLA2 and FBGV are upgrades of the BGVL-3; the former featuring mesh palm and the latter fancier designs. 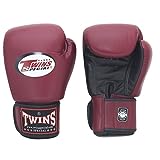