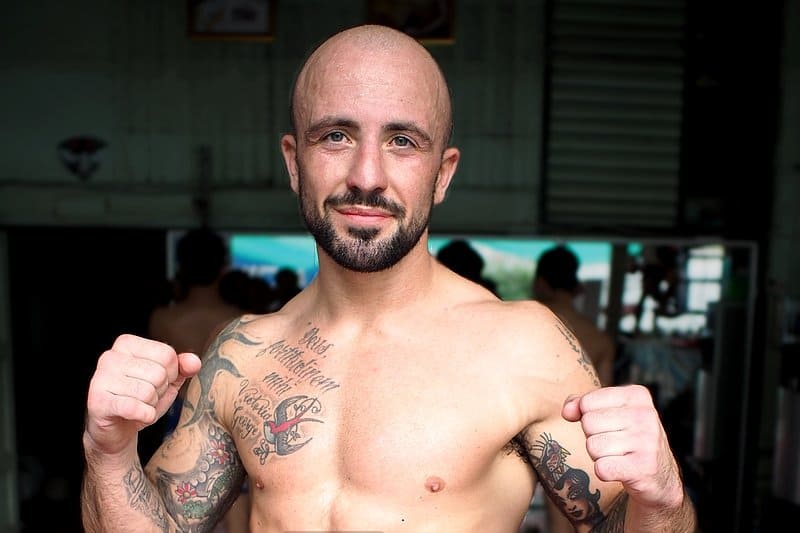 For the second installment of our “Get In The Ring” feature series where I celebrate the life of Muay Thai fighters, I interviewed England’s Andy Newall. Andy is the founder and Muay Thai head coach of Hertford Combat Academy in UK. He comes with over 20 years of experience in the sport that includes competing in many of Thailand’s most prestigious arenas. I figured Andy’s the man to get a farang fighter’s point of view on the different aspects of Muay Thai and especially on training in Thailand. Real stories, real tips from real fighters.

It’s a little past 3pm and I arrived at Northern Bangkok’s FA Group Muay Thai gym to the rhythmic thuds of ropes hitting the mat. There were 4 lean, topless men working the jump ropes with silent diligence. A bald-headed foreigner was the first to return a nod and smile. We would quickly get acquainted and as I came to know, Andy Newall has a wealth of knowledge when it comes to the sport of Muay Thai. And a story that begs to be shared.

The 37 year-old Manchester Englishman who now lives in Essex, has been involved in Muay Thai for the last 24 years – both as a fighter and now as a trainer. Unlike a majority of English teens who fancied football more than any other sport, a teenage Andy picked up the brutal Muay Thai as a hobby. Turns out that Kurt Sloane had far-reaching influence than most would give him credit for.

“I started training Muay Thai after being captivated by Jean Claude Van Damme’s Kickboxer! I looked for local clubs and found my way to Sitsiam Camp, ran by Tony Moore. Tony is somewhat of a pioneer in England, training under Master Sken and also the late Grand master Yodtong.

“Tony was a very very tough old school trainer who placed a lot of importance on discipline. At times, I was more nervous of the brutal sessions he would put me through than the actual fights! To this day though, I am thankful of his methods as they have shaped me into the fighter and now coach that I have become.”

There was no turning back for the young martial arts fan as Muay Thai took over his life. Andy would go on to face a number of prominent figures in his fighting career. In fact, his step-up from junior rules Muay Thai already have him matched up against the highly regarded UK legend, Damien Trainor.

“My first fight with head shots (moving up from junior rules) was very memorable as it was against UK Muay Thai legend Damien Trainor! It was an exciting fight which ended in a draw after both of us received standing counts! (me from his right cross and Damien from my high kick)”

The young Andy progressed to fight in amateur world championships and represented England in 1996 and 1997. He traveled to Thailand to prepare for his fights and trained at Carryboy Gym, a top Bangkok gym at the time. He would later travel to Thailand again in 1998 where he found himself at the famous Sityodtong camp in Pattaya. There, he fought his first pro fight in Thailand which he also won.

A year later, and after clinching the BTBC (British Thai Boxing Council) title, Andy returned to Thailand once more. This time at the renowned Sasiprapa Gym where he lived and trained for 7 months under the late camp founder and owner, Chanai Pongsupa. Andy recounts this period of his life fondly,

“This was fantastic experience for me as I did nothing but train twice a day and fight every month; fighting at Rajademnern, Rangsit, and Omnoi stadiums. I also fought Live on Thai TV channel 3, not to mention bouts in Cambodia and China.”

Andy cited a number of his memorable fights including fighting in Cambodia against the local champion in a huge TV stadium, being the only foreigner in the place and to a hostile crowd. But the tale that had me sat up was certainly his brush in the ring with the legendary ladyboy, Nong Toom of “Beautiful Boxer” fame.

“Fighting Nong Toom was an amazing yet bizarre experience. I really didn’t know what to expect. Nong Toom entered the ring with a massive air of confidence, and performed a beautiful Wai Kru which ended with a kiss on the cheek for me that got the crowd whooping and laughing!

“From the opening I could feel her power (especially her roundhouse kick) and skill and found it very difficult to get inside to elbow and clinch her which was my plan. The fight was very much fought on the outside at kick range us both exchanging kicks and Toom doing a fantastic job of keeping me out with her teeps. I got the impression she was coming to the end of her career and didn’t wanna get involved in a scrap. It was a close-fought fight with Toom winning on points.”

Andy may have lost to Nong Toom in the fight but it sure earned him lots of street cred and a great story to tell his grand children.

Following his return from Thailand, Andy went on to fight many tough international bouts against opponents from Netherlands, Canada, France and Ireland. He eventually hung up his competition gloves and transitioned to life as a Muay Thai coach. (Those of you in the Hertford UK area should really check out Andy’s gym.)

“I set up Hertford Combat academy in 2014 with my friend Ben Hajir. From this gym, my Muay Thai team, team Jai Dee (good heart in Thai) was born and I have truly found my love for coaching fighters and passing on my knowledge. We have many C and B class fighters, including a strong female fight team and we have enjoyed a lot of success in the past few years on the UK circuit.”

Andy also has some golden advice for anyone who’s considering a move to train Muay Thai in Thailand,

“If you have the opportunity, go for it! Thailand is a very friendly country which i found very easy to live and fall in love with. Also with the standard of Muay Thai in the world constantly getting better, foreigners are taken a lot more seriously than they used to be and there are a lot more opportunities to fight on great promotions.

“However I would say pick your gym carefully. Ive been going to Thailand for over 20 years now and I have slowly seen how more and more ‘commercial’-type Muay Thai gyms are appearing and the slow demise of the authentic gym. This I can understand, as the aim is to become more attractive for westerners to visit – providing things like air conditioning and fitness style classes etc, however the standard of actual coaching/fighters being produced is poor.

Andy’s tale is an awe-inspiring textbook case of chasing the Muay Thai dream. Truly, and in his words, if you ever have the opportunity, go for it!

I ended off the interview with a series of brain-picking questions and Andy shares his favorite fighters, most recommended gym, and choice of the best Muay Thai gear:

3 Favourite fighters of all time:

My top 3 current fighters are all from Sor sommai gym. Unfortunately i visited to try and train there this year and was told that they don’t allow foreigners to train at the moment, which was very disappointing.

Favourite shorts: Infightstyle. We have used them to make our custom shorts and they have produced superb quality and fit every time!!

We are not just another number in the statistics. Every single one of us has got an unique story to tell. Do you have a great story too? Share it with me via the contact page. I would love to hear and share your Muay Thai tale on the website.