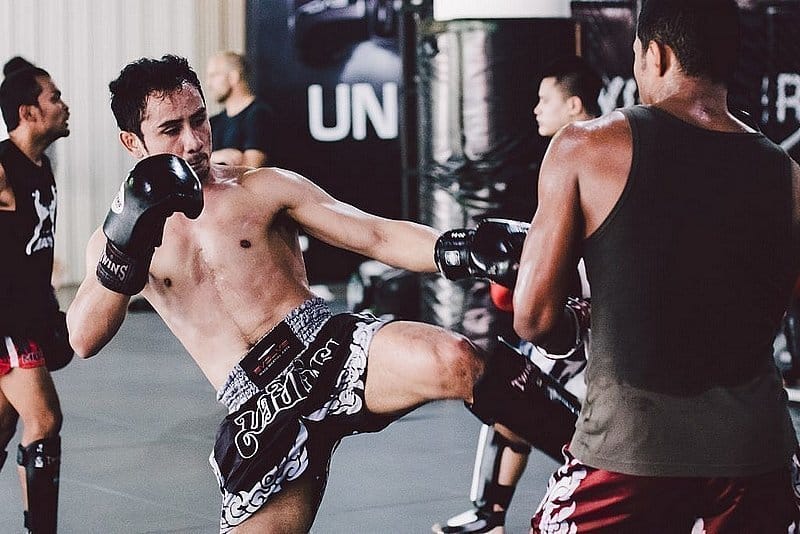 (Updated 11th January 2018: Sam-A will be fighting at One Championship: Global Superheroes in Manila on 26th January. He faces Italian fighter, Joseph Lasiri in the octagon using MMA gloves but under Muay Thai rules i.e. no ground-fighting)

The perks of residing in Singapore and being a member at Evolve MMA include not just authentic Muay Thai training under world champions. As a Muay Thai blogger, this proximity allows me to pick their brains and gain valuable insights into the minds and lives of athletes who fought at the top of the game. For the first of our “Get In The Ring” fighter spotlight series, I sat down to chat with the famed Triple-Aces Five Stars Fried Chicken. Not a fast food but the legendary fastest kicker of Siam, the one and only, Sam-A Gaiyanghadao. (Sam-A translates to mean triple aces and his last name was his sponsoring company)

For the uninitiated, Sam-A Gaiyanghadao is a true legend in the sport of Muay Thai with wins over many of the top competitors of his time. His technical style, strong fists and lightning kicks have brought him victories against world class fighters such as Petchboonchu FA Group, Pornsanae Sitmonchai, Penek Sitnumnoi, Pakorn Sakyothin, Petpanomrung Kiatmoo9, Superlek Kiatmoo9, and Sangmanee Sor Tienpo among many others.

Sam-A, whose real name is Phithakammara Pawit, comes from Buriram in the North Eastern region of Thailand, a region well-known for producing the top fighters in the country. He began training Muay Thai at the age of 9, very simply because he enjoyed watching the sport as a kid.

He arrived at Bangkok’s Petchyindee Gym in 1998 and won his championship title in Thai year 2547 (2004) against Petch T. Baengsean for the Lumpinee 115 lbs belt. Sam-A would go on to add more belts to his accolades across different weight classes at both Lumpinee and Rajadamnern stadiums.

After an illustrious 25-year fighting career, Sam-A relocated to Singapore in 2016 where he joined the top Asian MMA facility of Evolve to become an instructor.

“I was giving up a lot of weight fighting foreigners and experiencing some ups and downs in my form towards the end of my fighting career. That was when I decided to try out teaching and transition to the next phase of my life.

“I got in touch with my former (Petchyindee) camp mate, Nong-O Kaiyanghadao and asked what it was like to be working at Evolve and whether there was any opportunity for me here. Nong-O said ‘yeah’, then introduced me to Kru Ped (Saknarang Sityodtong) and from there on, the arrangements were made for me to come over. I have been here for close to 2 years now and it’s been great and a lot of fun.”

Now as a Muay Thai teacher, one of the questions he gets asked frequently by his students more than anything is the secret to his signature left roundhouse kick. He insisted that it is all very easy and simple.

“There are 3 keys to a fast kick: it’s your arms, the ankle and the hips. All 3 things have to be thrown with speed. Firstly, with the ankle, the kicking foot needs to bounce and explode off the ground. The arm needs to be swung and thrown downwards fast. Plus the hip, it needs to be twisted fast. So if you focus on these 3 things and make these actions as fast as possible, then that will make the kick fast. Most people focus only on just swinging the leg and not all 3 elements.

“The other thing is the trajectory of the kick. My kick goes in a straight-up 45-degree trajectory and twisting the hip at the last moment. Of course, running is an important aspect of training my power. Not only did I ran a lot more than others, I also focused on running at a fast pace to work on the explosive power.”

Sam-A lists Samart Payarakoon as the best fighter of the older generation, and Saenchai as the best in the current era. But when asked about his role model, perhaps it isn’t so surprising that the name he spoke of with reverence was another legendary southpaw famous for his destructive left kicks: Samkor Kietmontep.

“When I was coming up as a fighter, one of the person who was my idol was Samkor Kietmontep. I always looked at him as an example of how to kick fast and hard. He was someone I aspired to be, and whom I patterned a lot of my techniques after.”

Like many Thai fighters, Sam-A’s life was every bit as dramatic as his fights in the ring. From winning his first Lumpinee title at 19, falling out with his camp, working as a construction worker living on 5 baht a day and his triumphant return to the top – it is a classic tale of epic struggle. His success had not come easy and it takes immense heart and a warrior spirit, but he humbly credits all these to a few people in his life.

“There are a few people whom I attribute my success to. The first person would have to be my first trainer in Buriram who helped built up my skills as a fighter. His name is Mitmai and he was the person who helped to win my first title.

“Another person who was pivotal in my career and whom I trained under was my father-in-law. He was the person who suggested that I work on my physical strength and endurance to last the full 5 rounds. He trained me really hard and tough, focusing a lot on running but also on my techniques on how to fight against a heavy clincher. (Sam-A holds 2 wins over famous clinch fighter, Petchboonchu FA Group).”

Sam-A also spoke reverently about his former boss at Petchyindee camp, Nuttadaj Vachirarattanawong. He remains in regular contact with Nuttadaj and would always make it a point to pay a visit to his former camp whenever he returns to Thailand. He reminisced about his days when the young Petchyindee owner just took over.

“He (Nuttadaj) would join us on our runs and training and made us perform crazy antics. There was once he made me dance in front of a convenience store after our run! He injected a lot of fun into our otherwise tough and tedious training life. Without him or his father (Virat Vachirarattanawong, famous Lumpinee promoter), I wouldn’t be where I am in life. They were both definitely central in propelling my fight career to the height of its success.”

Sam-A’s last fight was a year and a half back in 2016 at the Toyota Tournament in Japan. With his current well-paying stint as a trainer at Evolve, there was little reason for him to return to fight. So Muay Thai fans naturally went nuts last month when speculations of a match up between him and Saenchai surfaced on the web.

The excitement was however, short-lived and as it turned out, the rumour was a case of linguistic misinterpretation by the foreign reporter. It would have been a dream fight come true for many fans.

“There really was a plan to get both Saenchai and I to fight on the same card but against other opponents. The foreign reporter probably misunderstood that and thought we would be fighting against each other. It was meant to be a ‘farewell fight’ of sorts for the both of us, signaling our retirement from the stadium circuit. But not against each other since we are in different weight divisions.”

As of penning this article, the fight card for Sam-A’s return is still in the midst of matchmaking process but he has confirmed a 9th December fight appearance, possibly at one of the 2 top Bangkok stadiums. I was curious as to his reasons for getting back in the ring again.

“After seeing a lot of my team mates here fighting, I got the itch to return to the ring to compete again. At the same time, a lot of my students here are competing or going for the (Evolve) competition team tryouts. I felt like I wanted to be an example for them and show them how I train and what I can do in the ring. Be an inspiration and example for my students.”

“At first, the training took some getting used to, as I haven’t been fighting in a while. I also had to learn to juggle training with my teaching, so I made sure to get up early everyday to go for my runs before my work as well as find time in between my teaching schedule to train.”

While fans speculate over his potential opponent for the upcoming fight, fantasizing about possible match-ups they wanted to see, Sam-A himself is less hung up over the matchmaking.

“I don’t have any particular opponent in mind that I would like to fight. It doesn’t matter who he is, I will fight anyone the promoters get me.”

Sam-A has come a long way in his journey but at least he no longer needs to worry about surviving on 5 baht a day.

According to him, a majority of fighters in Thailand are lacking knowledge in terms of financial planning, basically living from one fight purse to the next. Thus, many former stadium champions retired with little or no money to their name at the end of their fighting career, taking up jobs as taxi drivers, street hawkers and construction workers.

Bear this in mind the next time you’re in Thailand and thinking about picking a fight on the street. You may just be facing a former Lumpinee champion. Life is rosy now for Sam-A , who has settled into his role as a trainer at Evolve.

“For now, I want to continue to work and fight. Coming over to work at Evolve MMA, I get to save a lot of money to build a better life for my family back in Thailand.”

We ended the interview at this point and I offered to drive him to the Evolve Pomo branch where he is based as an instructor for most days.

During the journey, we chatted more casually and he shared about his fondness for spicy food, the importance of eating tonnes of rice as a fighter for energy, and more about his fighting days.