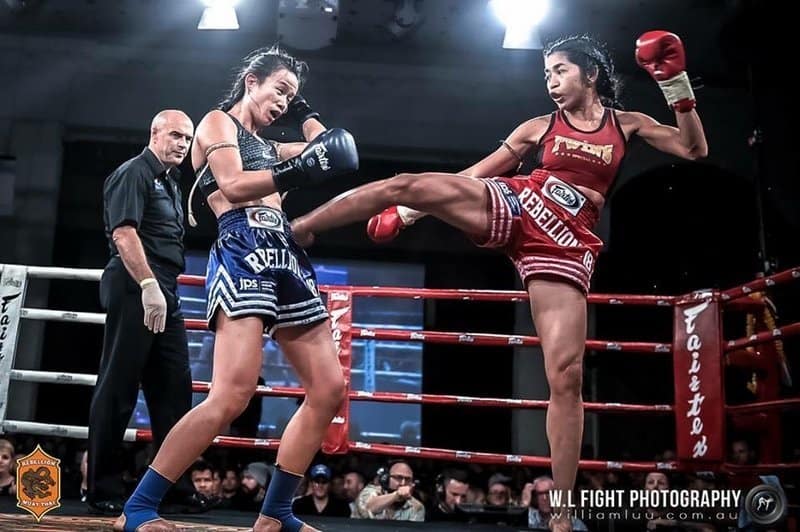 Editor’s note: Claire Baxter is a three time Muay Thai World Champion. She is a practicing psychologist with a degree in sport and exercise psychology. This is her first article for Muaythaicitizen.com.

Somsurat Rangkla next fights on the 8th of March in Bangkok, Thailand. It will be her tenth fight. My next fight is March 23rd in Sydney, Australia. It will be my thirty-third fight. We’ve been training together now for six months, and tonight Somsurat is giving me a lift home after training.

In the last few weeks, both of us have been swept up in the collective energy of the gym – our second home – as we, and many of our stable mates get ready for the first fights of 2019. It’s an exciting, emotional and exhausting time. We discuss the final week of fight preparation.

Claire: What’s the final week of your fight prep like?

Somsurat: Weight! I’m mostly thinking about how much weight I need to cut. Although, a funny thing, if I am already on weight, then I get nervous.

Claire: What’s going on there?

Claire: I feel a combination of centeredness, and impatience. On one hand, I feel purposeful and directed when I’m preparing for a fight – in contrast, I experience mood slumps and lack of motivation when I don’t have a fight on the horizon. On the other hand, I’m often impatient to get into the ring: I really want to fight.

Somsurat: What about your weight?

Claire: I actually don’t mind the weight cut. Once I’ve decided that there’ll be a few days where I’m going to feel a bit hungry, a bit thirsty, a bit low in energy; once I’ve accepted that, then the weight cut is fine. I like the calculations – how much I have to lose and how much time is left to lose it. I like the sense of being in control.

Somsurat: Do you feel nervous?

Claire: Yes… but I like that feeling. I like the high psychological arousal and calmness that comes with it… Som, what’s the best thing about fight week?

Somsurat: The day of the weigh in! It’s hard not eating or drinking much!

What’s the best and worst thing for you?

Claire: The worst thing…  I guess I have two answers to this. When I was living and fighting in Thailand, the coming fight meant that a) I’d get a break from training and b) I’d be going home to see family – I was away from my family for months at a time. I was pleased that the separation would be coming to an end soon. I’m back in Australia now, not distanced from my family, so the worst thing is dealing with my impatience for the fight to actually arrive.

Somsurat: … and the best thing of fight week?

Claire: Oh, the focus! Being so narrowly focused on the one, meaningful thing makes me feel completely centered. I think I’m in my best psychological state in the week before the fight: it’s like this acceptance that I’m going to face high excitement and stress, and a resolve to meet it with calmness and precision. It’s hard to describe, but it’s the best feeling in the world! What’s going through your head in the final week?

Somsurat: Well, I’m not really pumped up: I don’t want to “smash it” or “kill her”. I know some people do, but I just want to get in the ring to test my skill.

Claire: (Grins) You looked like you wanted to kill me in sparring the other day. You were pretty intense and focused.

Somsurat: (Laughs) You’re a lot bigger than me! No, seriously, it’s about good skill and timing for me; not about getting really pumped. What about you?

Claire: I think we’re probably the same with respect to that. I never want to smash the opponent; sure, I dream of power, devastation and knock-out knees, but it’s important that my strikes are high skill and elegance.  Actually, I once tried the aggressive attitude on for good measure – basically forced myself into thinking “I’m going to smash her!” – but it was contrived and it wasn’t me. All that happened was that my timing was really bad.

Somsurat: I’m going to let that one go, Claire.

Claire: That’s a relief… So, what are you energy levels like in the final week?

Somsurat: Really low because of the weight cut. Yours?

Claire: Yes, I certainly notice that I have much less energy and power. I also want to sleep more, even during the day. What’s your mood like?

Somsurat: (laughs) Baaad! I feel sorry for my boyfriend because I’m in such a bad mood. I’m grumpy about not eating. You?

Claire: Hmm… It’s changed a lot as I’ve become more experienced. Early on I used to feel dread and anxiety, and feeling like I wasn’t up to the challenge…

Claire: … just really centered and focused. I feel better before the fight than I do after it. After the fight, when the focus is gone, I tend to fall apart mentally if I’m not careful. Do you have any strategies to cope with the stress of fight week?

Somsurat: (Nods) Suad Mon – basically, meditating. It is part of my religion. It consists of a meaningful chant (even though we don’t know the meaning of the words, we know the overall meaning of the chant). I feel very “present” when I do it. It calms me. I also spend a lot of time planning and organising things: my meals, my training clothes, my post-training clothes… I sort of organise my life more carefully.

Claire: I don’t meditate, but I do something similar with respect to planning. I plan out everything, and I pay a lot more attention to small details in my life – food, laundry, even cleaning the bathroom. It’s not really a contrived strategy, it’s more a process of the mind that kickstarts itself into action. I believe it helps me focus on my immediate surrounds. It’s like the precursor to clarity of mind and (hopefully) flow state.

Somsurat: Should I drop you off at this set of traffic lights or the next?

Claire: Here is great. Thanks Som! See you tomorrow!