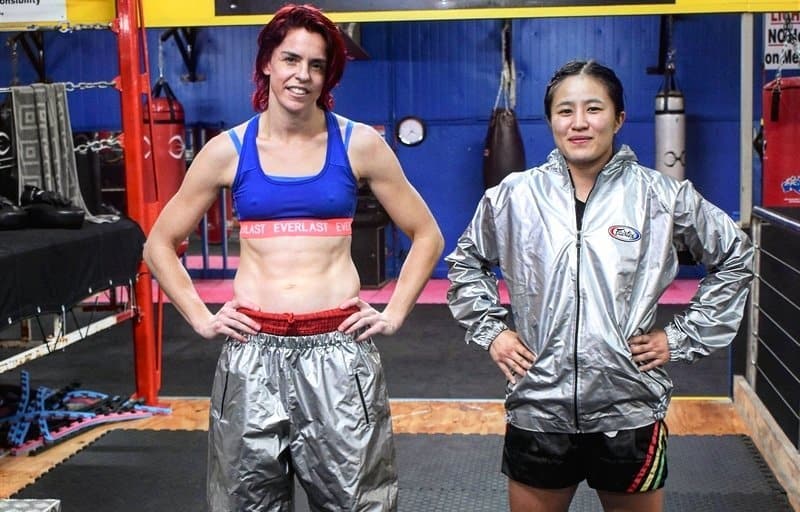 Editor’s note: Claire Baxter is a three time Muay Thai World Champion. She is a practicing psychologist with a degree in sport and exercise psychology. In the second of her “Fighter to Fighter” series, she talks to her team mate, Joanne La, on the controversial topic of weight-cutting in Muay Thai.

It was Joanne La’s idea to talk about weight cutting. We are sitting in the gym, still sweaty from training. Jo is unwrapping her hands. I’ve grabbed a pen and a piece of paper from my bag.

“We all cut, but nobody talks about it,” she said. Jo and I have been training together for six months, and I know that Jo is tough. She trains hard, and she’s tough minded when it comes to cutting weight too.

Last week I placed cold towels on her forehead as she cut the final 1.2kgs in a hot, salt water bath on the day of weigh-in for her fight in Melbourne, Australia. When I dipped my hand in the water, it was uncomfortably warm: I wouldn’t want to be in that water. Jo submerged herself chin-deep in the water for two, ten minute bouts, and made weight an hour later. Like I said, Jo is tough.

Jo pushes her wraps aside and says that she wishes that we didn’t have to cut weight, but recognizes that we we can’t simply ignore weight when organizing matches. “I think weight cutting needs to be regulated,” she says.

I cut weight differently to Jo. I jog with a sweat suit on, and I don’t lose more than 500 grams in an hour, and I don’t lose more than 1.5kg in a day. Jo explains that her usual weight cut is a four week process, and only the last twenty-four hours entail dehydration and sweating. Jo walks around at 57kgs when training regularly. During fight camp, Jo modifies her diet, and her weight drops to 55kgs over four weeks, leaving her with a final 1-2kgs to cut for the weigh-in (depending on whether she is fighting at 53 or 54kgs). The final 1-2kgs come off via running in the sweat suit and sitting in the sauna. This time around however, she got it wrong – “Um, I was thirsty, and I drank after the run, and in between sauna sessions.” She rolls her eyes and grimaces. “I put all the weight back on.” Hence the hot baths.

“Jo, when you were cutting in the salt bath, the reason we kept asking you stupid questions about your favourite cartoons is because we wanted to keep you talking. We were ready to haul you out of that bath the moment you didn’t answer.”

She looks at me. “Yeah, thanks,” she says. “Having you guys around to support me was important.”

Last week, Jo showed no signs of physical distress in the bath; she answered all of our lousy questions – I think it’s amazing that she didn’t tell us to get lost because I don’t think she even likes cartoons – and communicated all of her needs to us clearly. Jo gave me the impression that she was acting within her comfort zone.

Reflecting on the weight-cut, I ask Jo if she felt any physical distress while in the hot bath. Jo shakes her head and describes the experience as merely an uncomfortable one. “It’s like training: it’s like doing 100 skip knees: it sucks, but you can do it.”

“So you never felt like you were in danger?”

Jo wants to know if I have ever felt myself in danger. I think for a bit. I remember the time a few years ago that I experienced heart palpitations.

It was a warm afternoon. I had the sweat suit on, and I was running in the sun. I was impatient: I wanted to drop the weight, go home and rest. I started doing short little sprints between the lines on the soccer field. I felt exhausted and my legs felt like lead, but I kept pushing myself, running backwards and forth between the lines. I felt like crap, and I expected that, but then I started to feel weird: different to the normal physical exertion of hard training. My heart was beating differently: not just beating hard, but beating out of rhythm. I stumbled over to a tree on the side of the field and sat down in the shade. I felt incredibly hot, and I took off my sweat-suit and sat there in my rash vest. I sat there for a while, just resting under the tree. When I felt better, I tied the sweat suit around my waste, thinking that I would jog back to the gym, but I was utterly spent. I ended up walking back. I remember thinking that the cool breeze against my wet rash vest felt like heaven.

Jo makes a face, and turns the question back on me “Do you think you were in danger?”

Fighters are used to pushing physical limits. We train ourselves to keep hitting pads and kneeing bags when we are short of breath and our bodies are flooded with lactic acid, because if we are going to beat a similarly fit, tough opponent in the ring, we have to be able to fight and function at our physical limits. Because of this, we’re actually quite vulnerable if we take the same approach to training as we do to weight-cutting: we are likely to ignore the signs of physical distress and push on. We condition ourselves to endure discomfort, stress and fatigue, and to focus on the goal. We probably carry this mindset across to many aspects of our lives, and in the main, it’s probably a good mindset to have, but it’s probably not the best mindset to have when weight cutting.

“So how do we know how much is too much then?” asks Jo.

I think back to what one of the ring doctors told me. “I think we have to be careful of any method of that involves losing a lot of weight quickly. We shouldn’t get complacent: losing weight through dehydration is potentially dangerous. We have to be slow, methodical and very well informed about what we are doing.”

I’m aware that what I am saying borders on both hypocrisy and criticism: we’ve each disclosed weight-cutting experiences where we probably acting outside of these guidelines.

Jo tells me that she is learning more about weight cutting with experience. “For the first five to seven fights, I was cutting incorrectly.” She pauses and looks up at me. “Do you want me to be honest here?”

I say that it is up to her what she discloses in this interview.

“The truth is, I was a bit bulimic,” she tells me. “I was inducing myself to vomit after eating in order to drop weight for the weigh-in.” I think she is brave for coming out with this.

“I started researching healthier way of cutting weight. I started seeking knowledge, and I started eating clean.” Jo now measures her food, and consumes enough of the three micronutrients (carbohydrates, proteins and fats) to ensure she has enough energy for training, and that she is slowly dropping weight over a period of a month leading up to the fight.

Jo asks me if I do this. I shake my head. My method is far less scientific. I’ve never calorie counted. I don’t change what I eat – I eat a high-carbohydrate, plant-based diet – I just reduce my meal sizes a week or few days before weigh-in, depending on how much I have to cut, and I run a bit further every day before training. I water fast and jog in a sweat-suit on the day of weigh-in, losing as much as 1.5kgs over the course of the day. I walk around at about 66kgs, and I like to fight at 61kgs, but I often fight in the 62-63kgs range.

Jo wants to know if I’ve ever cut incorrectly, and I share my mistakes with her. “Yeah, definitely. For my first eight or so fights, I starved myself down to weight. I didn’t know about water-loss, so I lost weight the hard way: by eating very little for four weeks. It changed my body: I lost muscle and mass during those first few weight cuts that I’ve never regained. Discovering the dehydration method actually made things a lot easier for me; it’s much easier to sweat off the final 1.5kgs over the course of a day than it is to starve it off over two weeks. It’s also much easier for the body to recover from dehydration -”

“-provided that it’s a sensible amount of weight, and that it’s done in a slow and controlled manner,” finishes off Jo with a grin.

Jo finds that menstruating makes a big difference to her ability to cut weight: and she can experience sudden influxes of as much as 5kgs with the onset of her period. While this has never been an issue for me, I’ve heard other female fighters report similarly.

I ask Jo to summarise what she has learned so far about weight-cutting. “Do your research, and consult experts,” she says. Jo thinks a nutritionist who has experience working with fighters would be a good place to start. I add that a fight doctor would be an excellent person to consult.

“And make sure you aren’t by yourself when cutting: you need people around you.” It’s one of those times when our inclination to push through pain and discomfort can be dangerous. It’s hard to accept that vulnerability, but to be safe, we have to. We need friends who know us well to watch us, and ask us stupid questions.

“Is that enough questions for now?” I ask Jo with a smile.