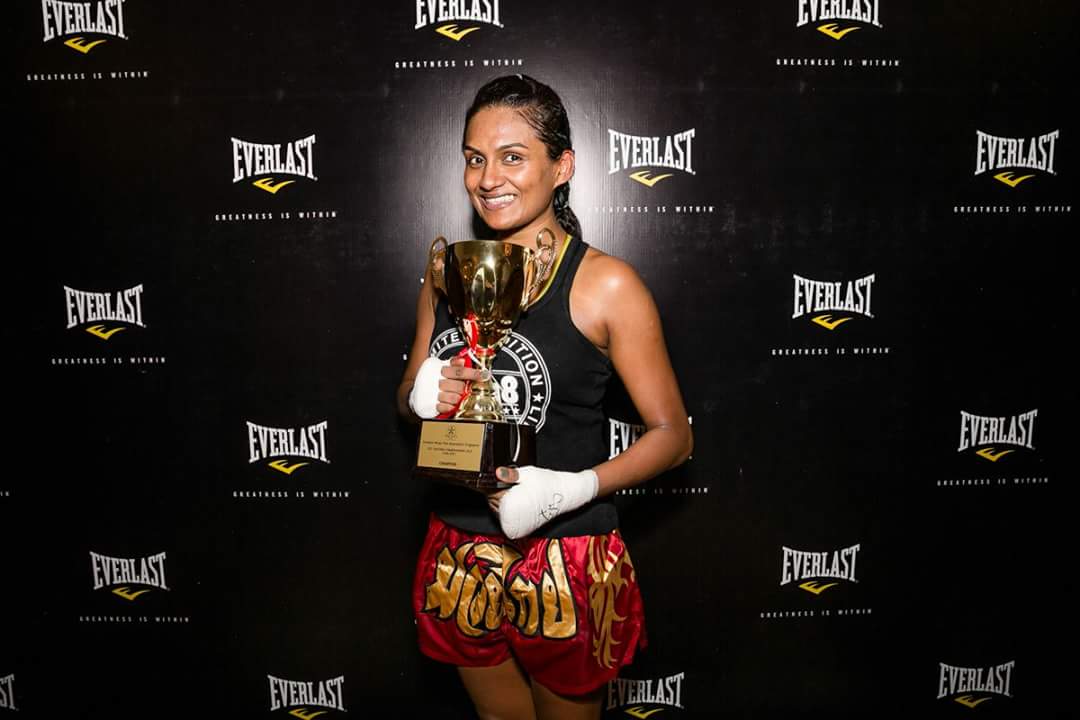 Note: This article was originally written for Rough Asia and was published on 17 May 2018.

At 35, time isn’t exactly on the side of Singaporean Muay Thai fighter, Laxmi Devaindran.

A legal & compliance analyst by profession, Laxmi has been competing in the sport over the last 5 years. As age catches up, so do financial commitments. There are bills and an impending mortgage to pay off. She can no longer travel to Thailand on a whim to train and fight. But the Muay Thai enthusiast has no intention to hang up her gloves just yet.

Laxmi’s foray into martial arts came relatively late in life when she picked up American Kickboxing in her university years abroad. She competed during this period and enjoyed it enough that she sought to engage in a combat sport upon returning home. Like all modern folks, she took to the internet for suggestions,

“I started googling to see what I can do. That’s when I stumbled upon local female fighters like Brenda Shee, who was among the first few local girls to fight Muay Thai abroad. I was very inspired. Once I went for my first class, I was hooked.”

It’s not uncommon to see girls competing in Muay Thai but it remains a path that is very much less traveled. Laxmi’s mother had also hoped that her headstrong daughter could have chosen a more refined pursuit such as classical Indian dance. Unfortunately for her mum, Laxmi prefers to prance around in the squared circle.

“My dad was happy and proud that I was fighting. My mum and my brother on the other hand, were petrified. They were scared that I would get myself seriously hurt.”

Her background in kickboxing and a natural athleticism brought her up to speed quickly. Just over a year of competing, she was already struggling to find worthy opponents at her weight class locally. All roads in Muay Thai lead to the motherland of Thailand. Laxmi soon found herself traveling to Thailand to train and compete. As she began to build a name for herself on the women’s Muay Thai circuit, it got easier to be matched up by promoters for bigger shows. Last year, she was invited to take part in a 4-woman tournament at Krabi stadium where she received a generous 25,000-baht (780 USD) reward for clinching the title. “I thought I was going to get paid this amount moving forward and was really psyched about it.”

Nothing could be further from the truth. Not long after the Krabi tournament, Laxmi quit her day job in Singapore to live and fight in Chiang Mai. The decision came about as she was hungry for more fights. She also wanted to explore the possibility of being a full-time fighter. The Northern Thai city was picked as it is widely recognized as the epicenter of women’s Muay Thai in the world. On average, she was paid a meagre 3000 baht (90 USD) for each of her fight appearance, including those title bouts. With a substantial housing loan looming around the corner, she found herself returning home after 5 memorable months living the dream.

Laxmi will be heading back to Thailand this month where she is set to fight on the popular island of Koh Samui. Like most of her fight-vacations, it will be self-funded. If she wins, she will be paid with a few thousand baht but it is hardly enough to cover even the basic expenses and flight. Let’s also not forget the monthly fees that she has to pay for her Muay Thai training.

Back in Singapore, Laxmi wakes up early to go for runs before work during periods leading to her competitions. She would clock as little as 5 hours of sleep on some days. It has been a physical struggle juggling between work and training but there is no stopping this lionheart.

“I thrive in such situations. Bia, my trainer, gets angry at times because I don’t train at my full potential sometimes due to the exhaustion.  I wished I started younger. Now that I’m 35, I feel like I have to work and train so much harder. But I will just keep doing it anyway.”

For those looking to reap financial rewards out of competing in Muay Thai, it is clearly not the easiest route. Laxmi belongs to a class of fervent fight addicts who are in the game of pain for often, intangible rewards; fighting simply for the love of the sport. Payouts for fights in Thailand are typically quite pathetic and only a minority of fighters ever get sponsored by gyms. The majority pay out of their own pocket, contribute to the Thai economy, get hurt in the ring, and return home with a few stories to tell. Then they start looking forward to their next Thailand trip.