A lot of people like to say that Muay Thai is a simple stand and bang style martial art that doesn’t have any interesting or spectacular techniques. The problem is that that idea just is not the case. While it is true that most fighters don’t use a lot of flashy techniques, they still are trained in Muay Thai.

Things like spinning attacks and jumping attacks aren’t seen in every fight but that’s part of what makes them so exciting. The fact is that there are a fair number of jumping attacks in Muay Thai that you can add to your arsenal.

Lucky for you we are going to tell you about them!

To throw the superman punch you first lift your rear leg off the ground and bring it to your chest, kind of like when you’re throwing a teep. Instead of throwing a kick forward, you are going to jump forward off of your standing leg and kick the leg you just lifted up backwards while simultaneously throwing a punch with your rear hand.

This technique also acts as a feint because when you bring your leg up, your opponent is probably going to be expecting a kick. This will hopefully cause them to drop their guard and leave them open for your punch. This strike is also great at covering distance.

You can also do a superman punch with your lead hand, also known as a superman jab. For this technique just lift your lead leg and use your lead arm to punch instead.

This technique is pretty similar to the superman punch. In fact, it’s basically the same technique but just with an elbow instead of a punch. Elbow strikes are devastating on their own and jumping will add significantly to the damage.

To execute, lift up your leg and then kick it back and jump forward to throw a horizontal elbow. You can even add a bit of a downward angle on this attack as you will be literally coming down onto your opponent.

Out of all of the techniques on this list, this one is the most straightforward. For the jumping roundhouse kick, what you’re going to do is literally just jump in the air and twist your hips at the same time. This will have you throw the kick in midair.

This is a good technique to use if you lack the flexibility or height to land head kicks. It is also a very rare strike, even among jumping attacks, so it will probably catch your opponent off guard for a second. That second is more than enough time to land the attack and get back on your feet.

If you want to be like the Muay Thai legend Saenchai you can even throw this attack to the legs to really mess with your opponent’s head.

If you do a little hop before jumping, it will do a lot to help you get more bounce and power into your actual jump kick. 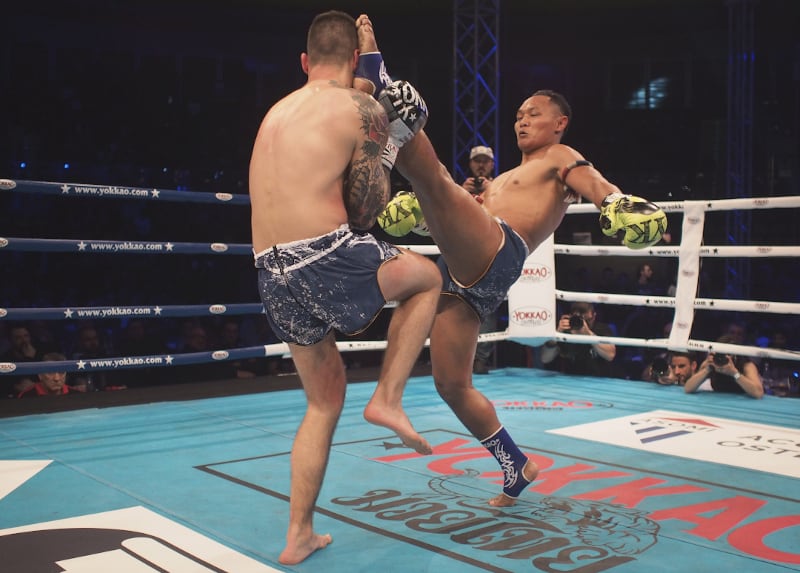 The bicycle/scissor teep is a technique that was made famous in the classic 80s movie, The Karate Kid. This technique is basically the crane kick from that movie, except you don’t start in a weird stance first. From your stance, you are going to lift up one of your legs like you were about to teep, kind of like the superman punch.

The main difference is with that initial lift of your leg you are going to jump at the same time, you are then going to kick with the opposite leg. Doing this motion should make a motion similar to riding a bike, using a pair of scissors or keeping yourself above water when swimming.

Remember to come forward with the kick and not just upwards. If this technique lands on the chest or even the head, it’s guaranteed to at least push your opponent back and knock the wind out of them. If you do more of a snapping kick instead of a push kick you can get a knockout just like in the movies.

Jumping knees have finished many fights so use this to your advantage.

Believe it or not, there are actually a few different ways to throw this technique. One of them is actually the same method as the scissor kick.

Lift up one leg and then jump forward and land with the other leg’s knee. This method is best used when your opponent is really far away from you as it covers a ton of distance. You can also just jump straight forward and try to land your rear knee. For this technique, you want to step forward then pull yourself forward to jump and then throw the rear knee.

This is for when your opponent is a little closer to you or even walking in on you. This version of the jumping knee is a quicker attack than the scissor variation.