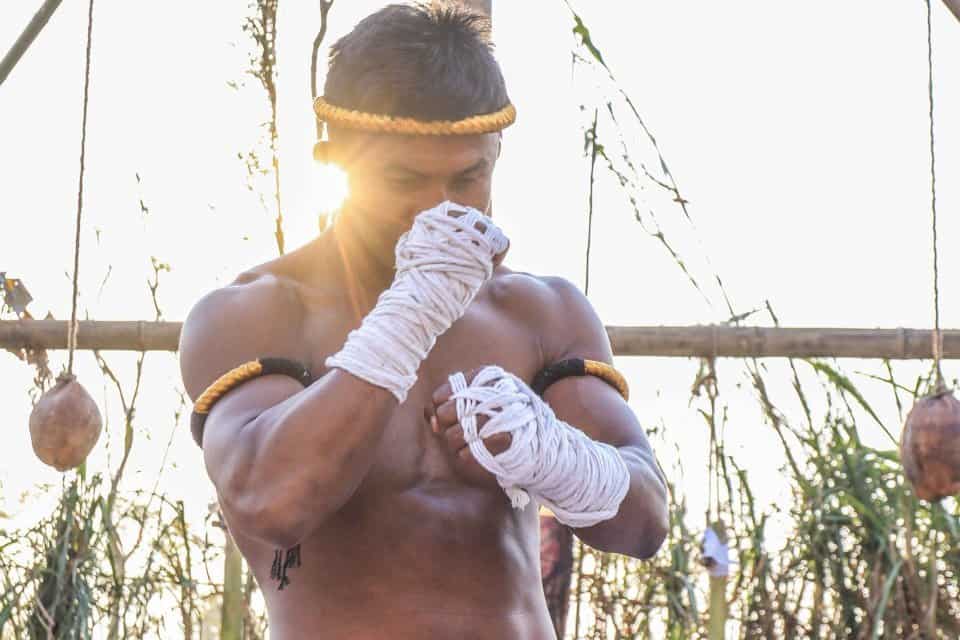 Think Jean Claude Van Damme’s Kickboxer, Tony Jaa’s Ong Bak, and Fahkumram in Tekken 7. What are these “Muay Thai ropes” and why do these Muay Thai fighters wear ropes on their hands?

Read on to learn why Muay Thai ropes were banned in the 1920s which led to the modernization of the sport.

What are Muay Thai Ropes?

Muay Thai as a sport was modernized in the late 1920s when set rounds, boxing ring, referee and the use of proper gloves were mandated. Prior to that, ropes were worn in place of boxing gloves.

These Muay Thai ropes are made using hemp, and wrapped around the hands of a boxer in a similar fashion to modern boxing hand wraps. The ropes offer a means of protection for the boxer’s hands as an alternative to bare knuckle boxing.

Muay Kard Chuek is actually another name for Muay Boran (Thai: มวยโบราณ) which is a collective term for Thai martial arts prior to the introduction of codified rules. Muay Boran literally means “ancient boxing”.

Boxing gloves are padded with foam for protective purposes. They absorb and reduce the impact to minimize damage to a fighter’s hands. At the same time, gloves help to reduce -not eliminate- the force delivered on the head.

Muay Thai ropes are worn for almost the opposite reason. While they protect the fighter’s hands, hemp ropes actually inflict more damage to the opponent. Muay Thai ropes allow fighters to deliver more force -compared to boxing gloves- due to the smaller area of impact.

The ropes were tied in such a manner that made the strikes more likely dangerous as they would inflict cuts on the opponent.

For added damage, fighters immersed the ropes in water which hardened after they are left to dry.

It is also believed there are fighters in the past who would dip their wrapped hands in resin and broken glass for devastating effect. This myth is likely propagated by the final fight scene in JCVD’s Kickboxer.

Although disputed by many to be a myth, the practice of dipping ropes in glass has been reported in some accounts. It isn’t that far-fetched to assume that this barbaric practice may have been adopted in underground or back alley tournaments.

The practice has also been reported in the West African sport of Dambe so there is actually much truth to the purported myth. During the reign of King Rama VI (between 1910 to 1925), professional Muay Thai fights were regularly held around Bangkok. The first permanent boxing “stadium” was founded at Suankularb (now Suankularb Wittayalai School), and attracted many fighters from the provinces.

Fighters were properly matched and a winner is resolved when one side gives up or unable to rise after getting knocked down.

In 1928, a fight was sanctioned between Thai boxer, Phae Lieng Prasert and a renowned Khmer boxer from the Cambodian city of Battambang. The bout was put to a stop in round 3 when the Thai dropped his Khmer opponent with a flurry of punches.

The Khmer fighter was pronounced dead on the way to the hospital. The Thai Ministry of Interior announced the ban on Muay Thai ropes fighting after this incident. The ministry then mandated the use of boxing gloves which continues to this day. (Source)

Today, Kard Chuek competitions are held on the popular Thai Fight promotion as well as other televised boxing events. Modern Kard Chuek fights are less brutal as fighters put on thin padded gloves before wrapping their hands with ropes.

Kard Chuek fights are also occasionally held on temple festivals celebrated in the countryside around Thailand. They are carried out as a way of honoring the traditions.

Muay Boran as a cultural and traditional -non-competitive- martial art is practised in Thailand and around the world today. It is practised to preserve the heritage of the original martial art.

Practitioners focus on the forms of the original Muay techniques. Many Muay Boran techniques  are either neglected or banned in competitive Muay Thai. The Thai martial art is popular with martial arts lovers as well as fans of Muay Thai.

Muay Boran is also celebrated on March 17th every year as National Muay Thai Day in the city of Ayutthaya. Muay Thai fighters and Muay Boran practitioners congregate on this occasion (see image above). They dress up in traditional Muay Boran attire complete with Muay Thai ropes to honor the age-old heritage.