Like I always say, if you train Muay Thai, you need to wear Muay Thai shorts. And there are increasingly more brands and designs to help fill the market.

Muay Thai shorts are unique as a sportswear with their loud styles in garish colors and Thai fonts. Brands and even fighters themselves continue to come up with unique and creative designs.

Over the history of the sport, thousands of fighters have come and gone competing in all colors and designs of Muay Thai shorts possible. While many remain unmemorable, some of these shorts have attained iconic status in their own rights.

Here are my pick for the top five most iconic Muay Thai shorts of all time: 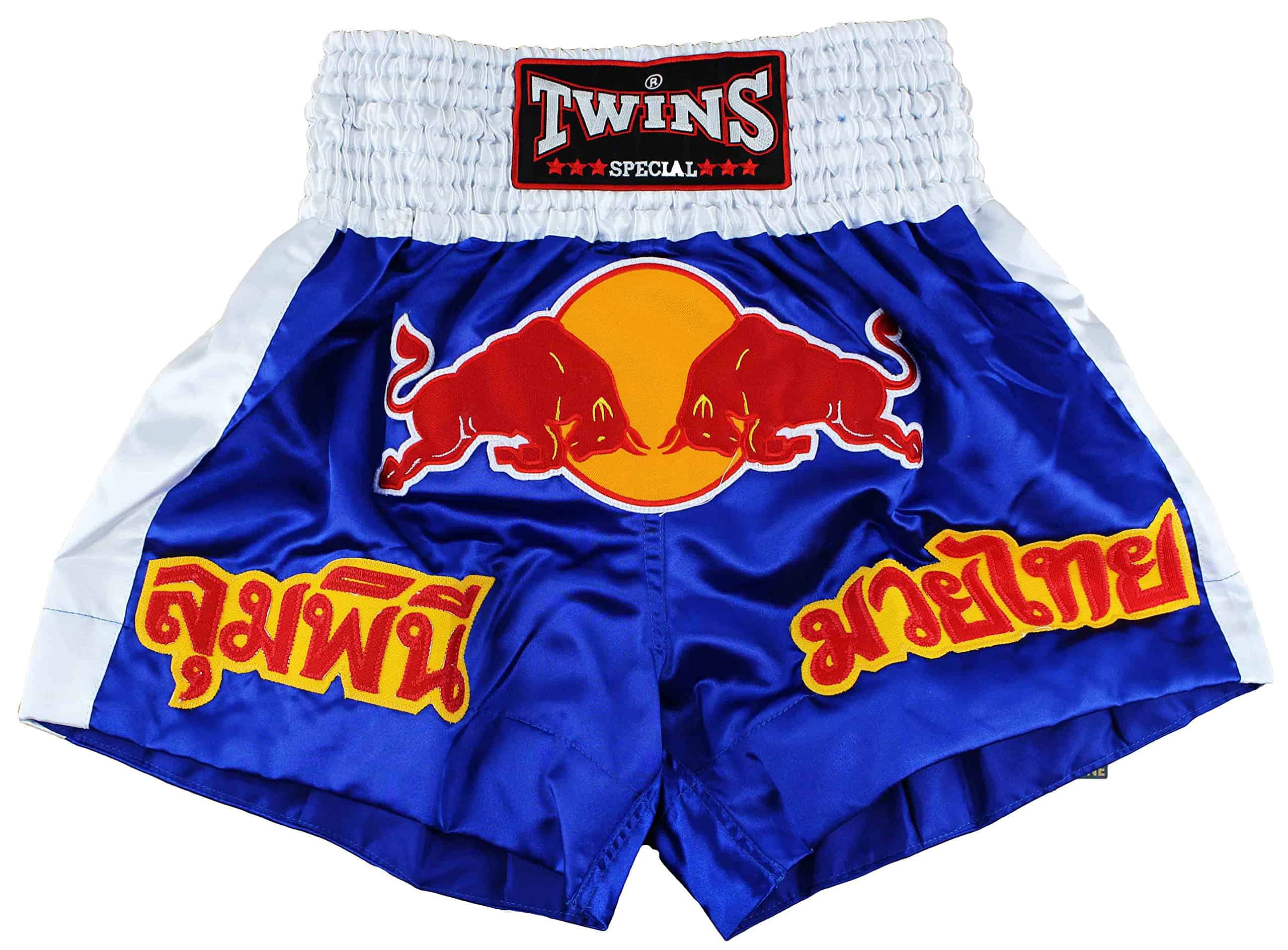 Red Bull is a world-famous energy drink that originated from Thailand. Known as “Krating Daeng” (Thai: กระทิงแดง meaning: red bull) in Thailand, the gold and red logo has become a cultural and national icon.

Red Bull was a regular sponsor for Muay Thai events and the logo often features on Muay Thai shorts. Twins Special and Raja Boxing are two brands that have made shorts with the big Red Bull logo embroidered patch.

If you ever visit Thailand, you can also find cheap nylon Muay Thai shorts with the Red Bull logo in tourist shops everywhere. 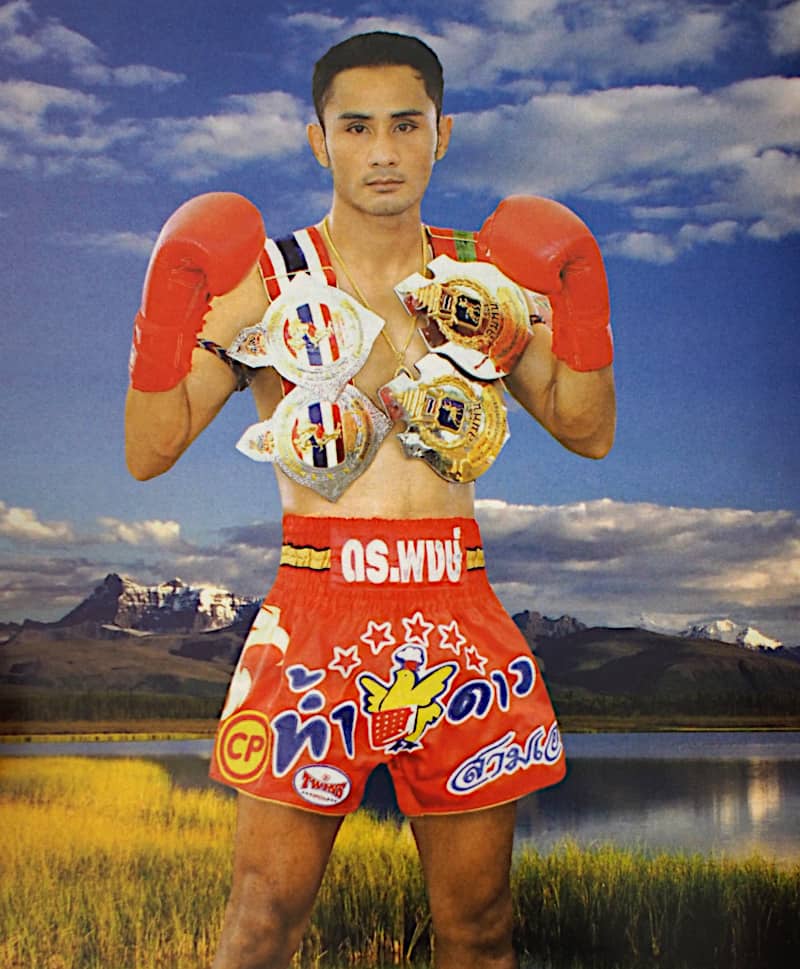 Of all the Muay Thai shorts released in the history of the sport, this has to be the most unique and iconic pair of shorts in my opinion. Sam-A was sponsored by Gaiyanghadao (Thai: ไก่ย่างห้าดาว meaning: five stars grilled chicken), a popular fried/grilled chicken chain (owned by CP food conglomerate) in Thailand.

Sam-A’s shorts feature the chain’s cartoony chicken mascot. This stands out in stark contrast to the brutality of the Muay Thai sport. That’s what makes the design such a striking juxtaposition.

The shorts are no longer in production but fight gear shops in Bangkok may be able to get a custom pair if you ask. 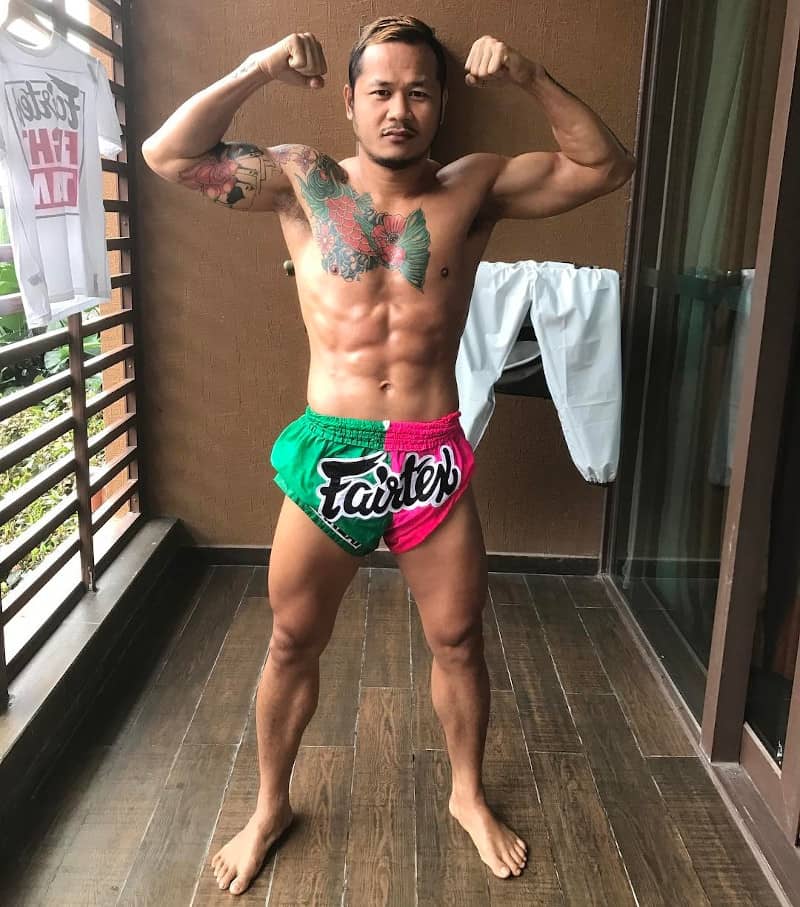 Yodsanklai joined Fairtex Training Center in 2005 after leaving the Petchyindee empire. Not long after, the renowned Muay Thai company then released the two-tone satin shorts for their biggest star of the time.

Unfortunately, the original shorts were only available to members of the Fairtex fight team. Here’s the good news: Fairtex updated the two-tone designs in 2020 including the neon pink and green colorway that is now available to the public. They are available at the Fairtex online store. 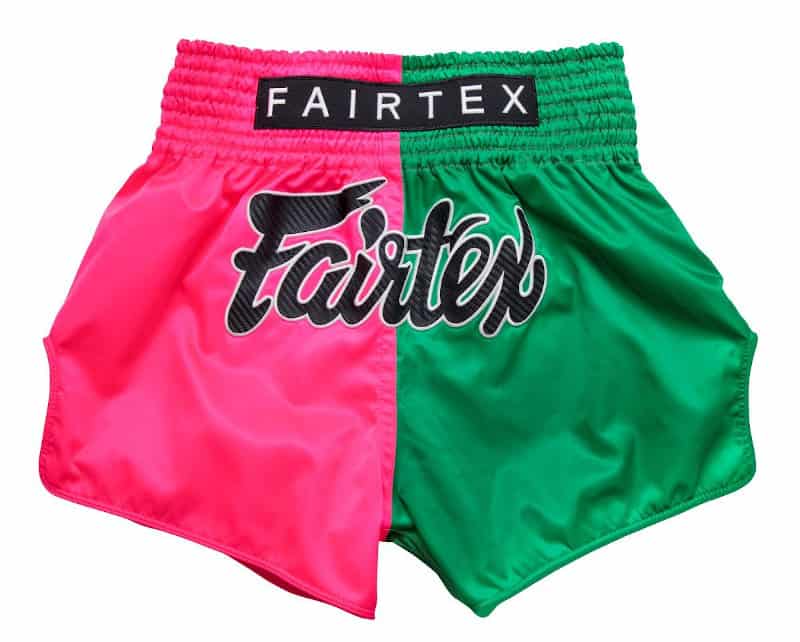 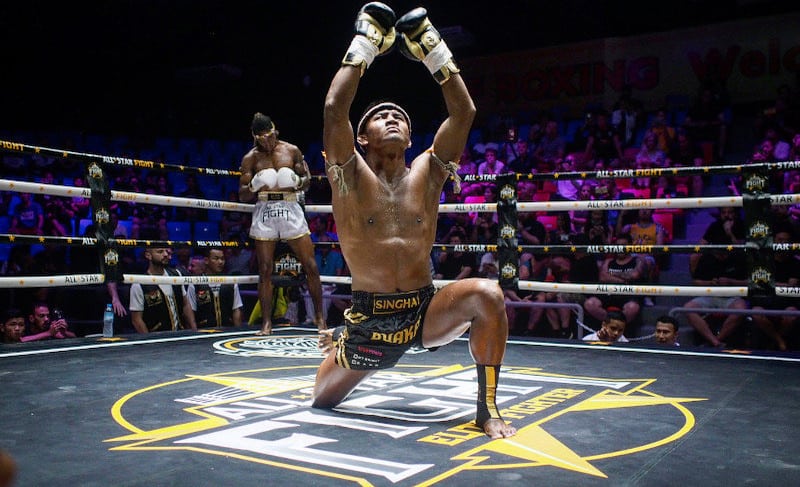 Buakaw Banchamek is Muay Thai’s biggest star and the sport’s global ambassador. The two-time K1 world max champion originally fought under the fight name Buakaw Por Pramuk. He ditched the name when he left Por Pramuk gym and took up Banchamek which is his original family name.

Since founding his own Banchamek gym, Buakaw began competing in his “white lotus” Muay Thai shorts. They would soon become his signature shorts and enterprising pirates in China even produced and sold counterfeit versions online.

The Buakaw White Lotus shorts are available in black or gold versions and are now sold in Big C supermarkets all over Thailand or direct from the Banchamek Gym facebook page. 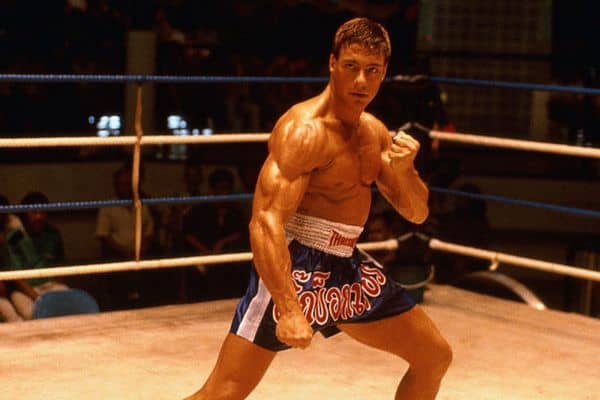 Jean-Claude van Damme’s Kickboxer introduced Muay Thai to a wider western audience in 1989.  It inspired many martial arts enthusiasts to take up Thai boxing. Many also make the trip to Thailand to train and fight like JCVD’s character Kurt Sloane did.

In what is one of the classic Muay Thai fight scenes of the movie, Sloane fought and won against a Thai at a local stadium . The spectators began chanting “Naksu Khao” (Thai: นักสู้ขาว) which means “White fighter/warrior”. Sloane is wearing a blue Thaismai Muay Thai shorts with the Thai script saying “คิกบ็อกเซอร์” which is phonetic transcription of “kickboxer”.

Thaismai continues to manufacture the shorts which are popular for nostalgic reasons among fans of the movie. They can be purchased directly from the Thaismai online store which ships worldwide. 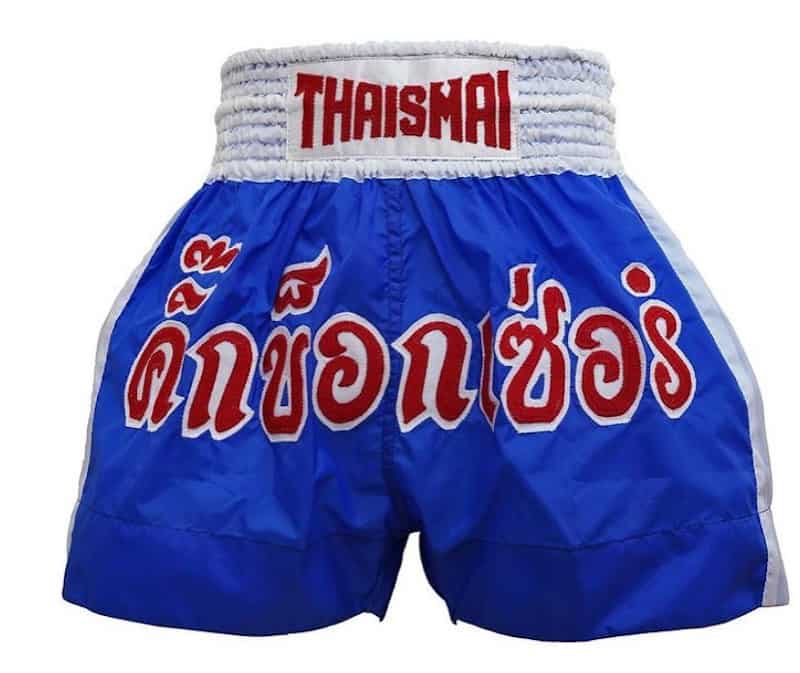