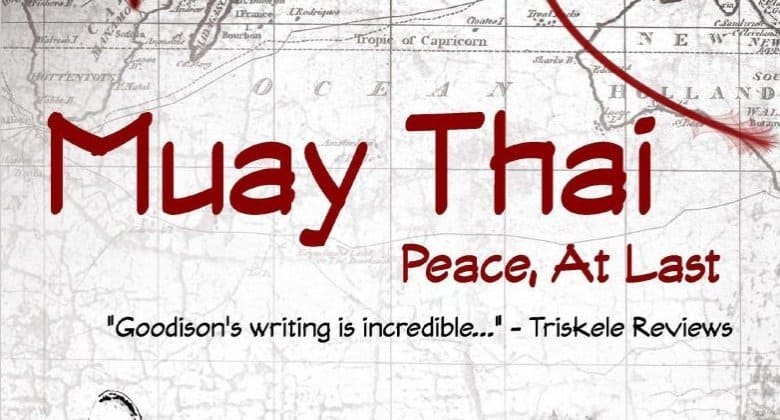 I received Michael Goodison’s “Muay Thai: Peace, At Last” in the mail one Friday evening. Ripped the envelope apart and read the book, and I honestly could not put it down. Read, and re-read the entire book within a span of a week. This is a page-turner from start to the end!

To be frank, I find it pressurizing in writing a book review as compared to gear reviews. To write and attempt to critique a writer’s work just seems rather ill-mannered to me. As if I am much better a writer! But because this was so enjoyable a read, and Muay Thai literature like it is few and far between, it warrants a review and article. But it will be a short one, as I would rather you get your copy of the book and read that, instead.

Without giving too much content away, and without over-sensationalizing the story as most copy-writing do: this book is a real-life account of the author’s one-month stay in Chiang Mai, Thailand, training Muay Thai that culminated with a fight at the Loi Kroh Stadium. Part fight literature, part travel story; part spiritual, part humor; it is an exhilarating ride to live the Muay Thai experience vicariously through Goodison’s writing. For me, what I find most captivating about Goodison’s writing is his candidness and genuineness that really comes through as he openly shares his thoughts.

From the blurb on the book:

“Battling an ever-present disinterest with the western way of living, Michael throws off the shackles and dares to live, confronting killer cobras and conversing with Buddhist monks as he prepares for a professional fight in one of the most violent martial arts in the world: Muay Thai.

From elephants lumbering along lush mountainsides to the rowdy backpacking scenes of northern Thailand, and culminating in an adrenalin-thumping confrontation, Peace, At Last is escapism in its classic form, transporting the reader to a world of misadventure, intrigue, culture, and violence.”

Great summary of the book, and I really couldn’t have said it any better.

As far as I know, this is the only book written from a Muay Thai fighter’s perspective on his Muay Thai experience. Another book that is regularly cited among fight fans is Sam Sheridan’s acclaimed “A Fighter’s Heart”. There is a brief chapter that mentions Sheridan’s experience with Muay Thai  in Thailand but is to a lesser degree, as the book focuses more on the mixed martial arts scene. And maybe it’s just a personal preference, but Goodison’s writing style feels more fluid, natural, and more engaging with the touch of humor.

There is a serious dearth of Muay Thai biographical accounts in literature, and it is a real pity. While there is no shortage of Muay Thai fighters, finding one who also writes can be a real challenge. “Muay Thai: Peace, At Last” does a great job of filling this gap and hopefully more fighters (both amateurs and pros) can be inspired to come forth and share their tales too.

Whether you have fought in the ring, or plan to fight, or relish in just being a spectator of the sport, this is a book that every Muay Thai lover should read once. Or maybe twice. It feels sacrilegious that not enough people know about this book. Get your copy and spread the word about this Muay Thai classic now!