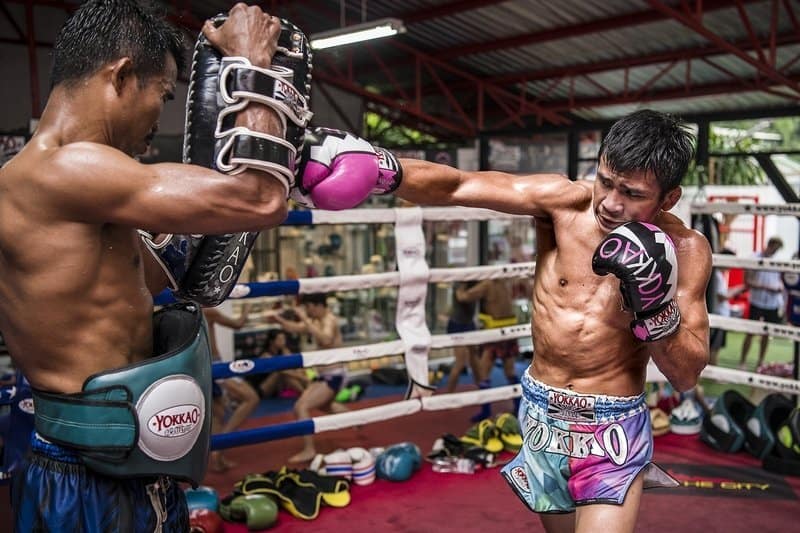 Mention “Yokkao” and what’s the very first thing that comes to mind? Premium Muay Thai products, world-class promotions, and partnerships with top fighters and gyms around the world. Make no mistake about it – Yokkao has set its sights on dominating the Muay Thai world since day one.

Looking around and you will find that Yokkao is everywhere. With a business operation that pervades every aspect of Muay Thai, it’s hard to not feel their persistent presence. The Bangkok-based fight brand was founded in 2010 but in just a few shorts years, it has distinguished itself as one of the most well-known brands in the Muay Thai world.

Here’s a look at Yokkao Boxing the company and how it has managed to stay competitive against its myriad rivals (or even ahead in some cases):

Although Yokkao started off as a Muay Thai gear and equipment production company, the brains behind the brand were brightly aware that they needed a proper game plan to create brand awareness in order generate the sales.

They gathered the biggest names in the sport and brought them together for the immensely successful Yokkao Extreme in 2012 and 2013. By the end of the events, Yokkao became a global household name among Muay Thai fans. Yokkao Extreme 2012 was attended by 12000 fans at the Forum di Assago in Milan and remains one of the biggest Muay Thai event in history. Yokkao’s brilliant game plan got the brand off to a great start.

It was a pioneering move by bringing together the most well-known fighters of the time and placing them on an international platform. To namedrop, Buakaw Banchamek, Sudsakorn Sor Klinmee, Sitthichai Sitsongpeenong, Kem Sitsongpeenong, Yodsanklai Fairtex, Saenchai, are some of the respectable celebrities who have fought in the star-studded Yokkao shows. Yokkao prides itself on holding the best Muay Thai events outside of Thailand and with a list like that, it’s a statement that is hard to dispute.

Since 2014, Yokkao has been collaborating with UK promoter, Brian Calder in holding the UK shows. While Yokkao has already gained quite a reputation with the early events, it is truly in the UK where it built a huge and faithful following. Shows at the Bolton stadium have repeatedly sold out and now with Facebook Live, fans are tuning in from all over the world to watch the matches.

Fight promotions continue to be a core focus of Yokkao and the international exposure has benefited both the participating fighters and overseas audience.

Of course, as a Muay Thai brand, Yokkao’s core business still lies in their gear and equipment sales. The product concept for this year (2017) really stood out against a market full of generic copies. The brand introduced matching collections based on geometric designs, colored in their signature neons that resulted in a aesthetically unique range of fight gear. Then there is also the oddball “Monster” collection which can be said to be this year’s cult hit. Around me, I observed an increase in the use of Yokkao products in my gym this past year too. It appears that people are really taking to the 2017 products. It is almost like they hired a new product design team and conducted a complete overhaul.

But you can’t always please everybody. Yokkao has its detractors who at times take to the forums to voice their imperfect experiences with Yokkao products. I have also come across “preconceived opinions” by people who have not personally used the Yokkao products. The truth is that this prejudice against Yokkao products is not completely unfounded.

Before 2015, after a successful run of events abroad and a run of aggressive marketing, the factory was responding to increasingly overwhelming demands for Yokkao products. The result was a brief lapse in the quality, notably the boxing gloves. This was something that the company admitted and remedied with free exchanges whenever reported by customers. To tackle this effectively, a 1000 sqm factory was set up in 2015, housing production facilities, newly-hired local craftsmakers and also a product r&d team.

As I understood from a recent article on the Yokkao website, the notable hook and loop issue on their gloves was studied and completely remedied since then. Here’s a detailed review of Yokkao gloves for another time. Just to summarise, in my own experience, I have not observed any malfunctioning with both pairs of Yokkao gloves that I purchased. (A synthetic model in 2016 and a real leather model this year).

7 years on as a gear manufacturer, I would assume they have learned a thing or two from dealing with their customers. With the Bangkok Yokkao camp and on-the-ground feedback that they receive from the trainers and fighters, I’m quite sure they would strive to continue on improving their products. Surely no amount of gimmicks or advertising can make up for an inherently bad product. There’s just no way around it.

Yokkao touts its products as “Premium Muay Thai Gear” and something that is often brought up is the premium that is charged on the products. Through my casual study, Yokkao products aren’t exactly that expensive as are sometimes led to believe. Let’s do a comparison: On Amazon, standard Muay Thai boxing gloves from Fairtex and Twins go for around 70-90 USD. Compared to the Yokkao web store where the higher-end gloves go for 90 USD and factor in the frequent festive or spontaneous promotions (10-30% off), the price difference is almost non-existent. Additionally, Yokkao offers a basic plain-colored, real leather Matrix model which is priced as competitively as any other Thai brand.

Back in Bangkok, Yokkao gloves retail officially for around 500 baht more than the Fairtex and Twins standards. In fact, the price gap could fast be closing up as these Thai brands have increased their prices this year. Insiders speculate that the price hike was made by Yokkao’s established rivals to narrow the price difference. Over at Super Export Shop in downtown Bangkok, the store carries a sizeable range of Yokkao products at very attractive prices that can rival the other brands. For those looking for more affordable options, there are certainly lots of alternatives available in the market.

Back on the subject of marketing.

When it comes to partnerships and sponsorships, you really have to hand it to Yokkao. The brand executed a winning checkmate when it made a very strategic move of roping Muay Thai legend Saenchai into the Yokkao fight team. This was akin to Nike landing Michael Jordan back in 1984. Today, the illustrious fight team counts Singdam, Pakorn and Manachai along with Superlek and Rungnarai from the affiliated Kiatmoo9 camp as its eminent members.

It was initially an uphill task to attract the talents over. Both Thai gyms and fighters were not familiar with the concept of sponsorship at the time – it was a very foreign idea. Gyms had to purchase the equipment and gear from their own pockets and of course, many still do. Fighters just use whatever they can find lying around the gym. Yokkao made a pitch and partnered with top gyms in the country that now include Sityodtong Camp of Grandmaster Yodtong fame (Pattaya), Kiatmoo9 Camp (Buriram) and PK Saenchai Gym (Bangkok). Along the way, the brands signed up more homegrown fighters and opened a full-fledged camp in downtown Bangkok that is fast becoming a top training spot for foreign visitors to the capital.

Outside of Thailand, Yokkao has also lent its name to a global network of affiliated training centers that can be found in UK, Hong Kong, Malaysia, Australia, Bahrain and even Zambia. From what I’ve heard, more gyms around the world are already in talks of joining the affiliated network.

She is the frontman and spokesperson for Yokkao. The Italian-Thai ex-model arrived into a predominantly-male industry and made a name for herself through sheer hard work and a sharp business acumen for the fighting industry.

It was completely hands-on for Picelli who orchestrated the Yokkao fight promotions from planning, coordinating down to contacting fighters. This woman is a multi-tasking miracle worker. Besides her role as a promoter, Picelli also spearheads the product designs. Perhaps her Italian fashion sensibilities played a vital role in the brand’s often outlandish and striking designs.

Picelli can be seen fronting the international fight promotions, leading the world seminar tours and she’s just practically all over the place. It’s not an exaggeration to say that she’s the key to the success that the brand enjoys today.

Yokkao has always been at the forefront in terms of introducing novel business ideas or marketing strategies into the world of the traditional Thai sports. The brand’s rapid success in the past few years can be attributed to a very driven community outreach program via social media. Today, Yokkao remains the most prolific Muay Thai brand in the social media sphere, adopting all the latest trends to stay fresh and relevant to its followers.

The company runs its own media agency with a team of photographers, writers, videographers and designers in order to churn out viral content on a regular basis. If anything else, Yokkao is a perfect role model to emulate for anyone out there trying to make their mark in marketing.

CNN, National Geographic and Wall Street Journal are some of the renowned media that dropped by the camp this year and featured the company in their programs. Domestic and foreign celebrities have also dropped in to train at the Yokkao gym from time to time, bringing the brand to a wider audience. Yokkao then blows the trumpet, because it understands the game of self-promotion explicitly. It’s all about presence and Yokkao knows it.

Yokkao differentiates itself from its competitors by operating in every imaginable aspect of Muay Thai and puts the brand in the most prominent spots through clever marketing but also clever product designs. They have essentially adopted very contemporary business strategies in a traditional sport and environment, and it has clearly worked for them in terms brand awareness. Success breeds haters and the brand has its fair share of naysayers. But there is no stopping the Yokkao train at this point that is bent on conquering the world. It will certainly be interesting to see how far this train goes.