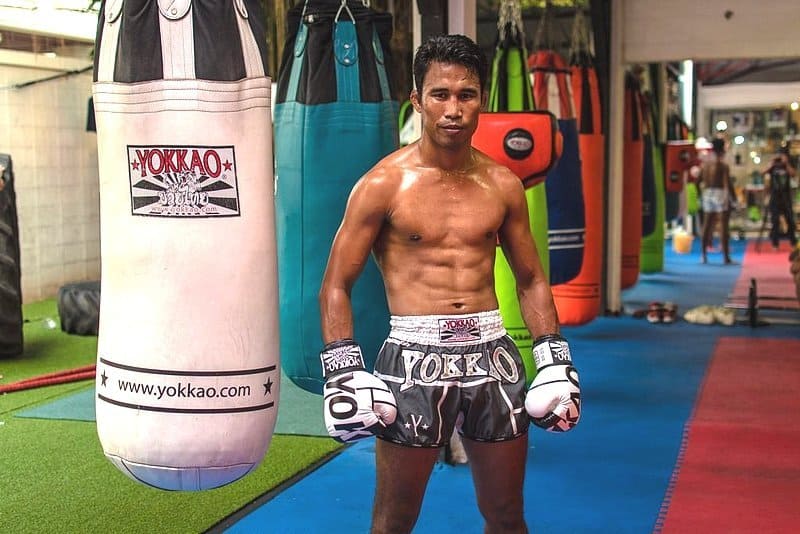 For those of you who are just tuning into the world of Muay Thai and kickboxing, Singdam is one of the biggest names from the past decade. Here’s what you need to know about the 33 year-old Muay Thai/kickboxing star and his recent endeavors:

Singdam YokkaoSaenchaiGym (formerly Singdam Kiatmoo9) is a multiple-time Lumpinee and Thailand champion. Besides his collection of said championship titles, he has the honor of being named Fighter of the year by Sports Writers of Thailand in 2002 and then again in 2003 by Sports Authority of Thailand. Between 2002 to 2014, the Black Lion fought against almost every top fighter in his time. His awe-inspiring fight record lists wins over Samkor Kiatmontep, Orono Wor Petchpun, Yodsanklai Fairtex, Kaew Fairtex, Jomthong Chuwattana, Sagetdao Petchpayathai, Petchboonchu FA Group, and -get this,- the living legend Saenchai. Every single one a legend in his own right and whom was fighting at the peak of his career.

After over 2 decades fighting on home soil in the native sport of Muay Thai, and outgrowing the Bangkok stadium scene, Singdam ventured onto foreign territories. The move came in tandem with his move to Yokkao Training Center in Bangkok in 2016 when he bade farewell to Buriram’s famous Kiatmoo9 gym, his training camp for over 20 years.

Singdam now finds himself based in Bangkok full-time where he trains alongside his Yokkao Fight Team mates, most notably Saenchai and Pakorn (both pictured above). Singdam’s elder brother and long-time trainer, Kru Petchdam also made the move with him and the siblings became the mainstays of the camp. Yokkao continues to maintain a close relationship with Kiatmoo9 through a sponsorship affiliation.

To date, Singdam has appeared on 3 of Yokkao’s popular international Muay Thai events. This includes his win against UK’s top fighter, Liam Harrison on the latter’s home-ground, no less. However, he might likely be remembered for his most recent Yokkao appearance in Hong Kong in this year’s knockout shocker. Singdam suffered a KO loss against a relatively new fighter, the young 25 year-old Kazbek Kabulov of Russia. The result was plastered all over the web. Perhaps in his zeal to impress the local audience with his Hong Kong fight debut, Singdam’s game plan worked against him instead. He recounted,

“I underestimated my opponent. My strategy was to try and swiftly take him out with a KO. I kept pushing forward in the fight but I got led into his trap which resulted in me getting the KO instead. The fight didn’t leave any negative impact on me but I will certainly not underestimate my opponents again even if they were young, inexperienced fighters.”

As one of Yokkao’s star fighters, Singdam is certain to make a comeback to the popular promotions. He is confirmed for Yokkao’s next show in Bolton (10th March 2018) where he will face UK fan-favorite and young talent, Reece McAllister. With his Hong Kong debut thwarted, Singdam will surely look to redeem himself in the Yokkao ring. An experienced Thai legend against an up-and-coming farang fighter – this is a monster of a fight that simply cannot be missed.

Other than the Yokkao events abroad, Singdam’s other foreign endeavor had been in China’s top kickboxing promotion, Kunlun Fight (KLF). Outside of Thailand, KLF has established itself as the best platform to compete in Asia for Thai fighters and Singdam was looking to score himself a piece of the Chinese pie.


This year, after taking 2 impressive dominating wins on Kunlun Fight 62 and 65, Singdam secured himself a place in the 66kg World Championship 8-man tournament. The single-night 3-fight format isn’t a new concept for the Muay Thai veteran who has competed in at least 3 marathon tournaments in his career.


“I don’t really see fighting in KLF any different from my other fights. I have also taken part in 8-man marathon tournaments before in Thailand and won twice so this is not something new for me. The only difference is that I will be fighting abroad and I feel like I am representing Thailand so I need to give my best.”

Singdam eliminated 2 fighters on the night of the tournament and made it to the finals. Regrettably, his campaign was concluded by his Chinese opponent, Yang Zhuo in a split decision.

“If I hold back with the thinking of reserving my energy for the subsequent fights in the night, my opponent(s) may stand to gain an advantage. So my strategy is simple, just fight each fight as if it were the last.”

Breaking his opponent’s arm in the quarter finals, and winning by an overwhelming majority decision in the semis, Singdam went all out from the start and exhausted his energy by the time he reached the finals. This was aggravated by his semi-final bout against Chinese fighter, Pan Jiayun who was a replacement fighter for the original semi-finalist. Despite being clearly outclassed by the Thai legend, Pan went into the fight fresh as a daisy after knocking out his opponent in the first round of the reserve match and severely wore out Singdam. While he may not have captured the tournament title, Singdam put up an outstanding performance that has garnered himself a legion of new Chinese fans. There have been talks of Singdam moving up in weight to compete at 70kg, which is where the most competitive action is at. It would certainly be a treat for the fans to see him go up against Superbon and Jomthong in a clash of the Thai titans.

The Muay Thai legend has clocked over 300 fights in his professional career to date. Even with his unsuccessful Kunlun Fight campaign, Singdam isn’t disheartened in any way. Winning and losing is all part and parcel in the sport of Muay Thai and even the very best suffer losses from time to time.

“I want to keep on challenging myself, training, improving, and becoming more well-known in the world of fight sports.

“For me, there are 3 elements in fighting as a professional: 1) this is a matter of survival (financially), 2) it’s about providing for our family, and 3) if we can let more people appreciate and know about Muay Thai, there is a great sense of pride in doing it.”

His exemplary humble personality and heart shines here. But as a fighter, he will always be known more for his fighting skills than anything else – in his case, his famed crushing kicks. Although Singdam captured numerous titles with a self-acknowledged Muay Khao fighting style that favored strong knees, he is often more known for possessing the most powerful middle kick in Thailand. A kick that has left a few broken arms in the wake of its destruction. His secret?

“I have no idea why my shins are exceptionally hard or why my kicks are more powerful. From what I know, this has been a common topic of discussion even among the Thai fighting community. Many of whom commented that my legs are the hardest that they have encountered. I don’t have a step-by-step method to develop them. However, I have always preferred  training my kicks since a young age. I train the same way as any other Thai does, but with an emphasis on kicks.”

Singdam is that guy Bruce Lee warned you about. The man who practised the same kick 10,000 times.

4 thoughts on “Singdam – The Black Lion of Buriram”