When it comes to Muay Thai sparring, Top King Shin Guards have been the undisputed king and gold standard for the longest time.

I spent 3 hours reading reviews from experts and users. In summary, this is what combat sport practitioners think about Top King Shin Guards:

-Many users noted that the cushion padding on the shin guards was thick with wide coverage, giving optimal protection for sparring.

– Majority of reviewers commented that Top King shin guards stay in place with minimal twisting even during intense sparring sessions.

– Several users complimented the brand on its excellent craftsmanship with not a stitch out of place.

– Some users reportedly used the Top King shin guards for 2-3 years, testifying to the excellent quality.

– A couple of reviewers mentioned about the lightness of the shin pads, which allows them to remain mobile during sparring.

– Quite a few users like the designs on models like Empower Creativity and the Snakeskin shin guards.

– Another reviewer brought up the looping pull-through design of the straps which offers extra security compared to regular overlapping basic design.

Reason Not to Buy:

– A few users noted that the raised knee design has a tendency to catch onto things when throwing a knee strike.

– Several users felt that the shin guards were a little narrow, making the straps to run a little short for those with thicker calves.

– One reviewer commented that the Top King shin guards were a little stiff at first and require a few training sessions to break in comfortably.

Most review sites have Top King shin guards listed in the top 3 positions, usually in the top spot for good reason.

The pull-through hook and loop strap system holds the gear comfortably in place, keeping them stable and secured. It is no wonder Top King Shin Guards are favored by Muay Thai enthusiasts and fighters all round the world.

The narrow profile of the shin guards is a key (r)evolution that Top King introduced with their shin guards. Shin guards used to be bulkier and straight like tree trunks, lacking the sexy curves of the Top King. Several brands followed suit after Top King, releasing narrow-cut shin guards.

Top King is often picked over top competitors like Fairtex and Twins Special when it comes to shin protective gear.

My only gripe is that designs have stayed stagnant and Top King seems lazy in rolling out new models. Perhaps they are working on the modus operandi of “if it ain’t break, don’t fix it“. The designs are beginning to look a little dated but they remain popular with a good section of the fight community.

One thing to note: for those with large, thick calves, these might not be the best options due its slightly narrower fit as mentioned by a few reviewers.

In many cases, Shin Guards size guide are based on height of users. However, from reading nearly 200 reviews, I’ve found that weight is a better indicator for choosing the correct sizing.

For a quick reference and estimate, here’s a size guide (not definitive) based on average adult users along with shin guards length (excluding instep foot padding) to help you find the size that best fits you: 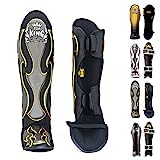