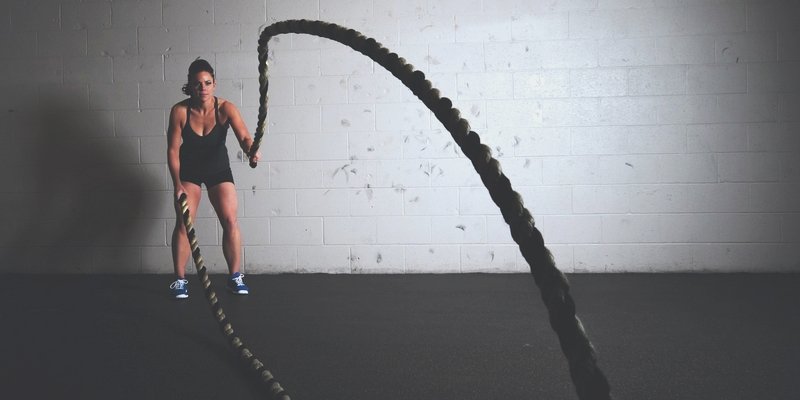 In my previous article (“How to Improve Muay Thai“), I listed some areas of my Muay Thai performance that I wish to improve upon, one of which is striking. The effectiveness of striking depends not just on strength but also explosive power, and the stamina to dish out strikes without feeling premature fatigue. One of the best ways to train is through plyometrics workouts.

What is Plyometrics?
Plyometrics are exercises in which muscles exert maximum force in short intervals of time, with the objective of increasing power (speed-strength). Performing plyometrics increases muscular power and develop the fast-twitch muscles necessary for fast and powerful movements. While plyometrics are also known as jump training and may have originally been designed for track (running and jumping) performance, they now extend to upper body workouts as well. These include plyometrics push-ups, medicine ball-throws and of course, battle ropes.

Battle ropes, as we know it, are said to have originated from the Battling Ropes system created by strength and fitness expert, John Brookfield. John Brookfield was a pioneer of innovative strongman training. In the early stages, his system was used mainly in NFL, MMA and wrestling for strength training and conditioning. In recent years, battle ropes themselves have garnered a lot of attention in fitness circles and have been incorporated in many fitness and HIIT routines due to both its novelty and effectiveness.

Battle ropes have been utilized in mma training right at the start of its inception for good reason. They are used, most specifically, to train strength, power and conditioning. If any of which is subpar compared to an opponent, you will be easily outlasted and outclassed in a fight. Here are some reasons why battle rope training can take your Muay Thai game to the next level:

Full Body Workout
Battle rope training build upper body explosive power as well as core strength, both are which are mandatory in order for your strikes to be effective. In fact, they work all of the muscle groups, saving you much time from having to do muscle-targeted training. You will be able to identify the weaker side of your body by observing the magnitude of the waves and hence correcting any strength imbalances on both sides of the body. Add in some lunges and burpees into the routine and 15 minutes may be all you need to get a full body workout with both cardio and muscle-building benefits. Talk about efficiency!

Muscular Endurance
If you have never tried it before, try making waves with the ropes non-stop for a minute and you will understand why it is such a powerful tool for increasing muscular endurance, especially for the arms. If you want to last 5 rounds of fight/spar or pad work without feeling wrecked prematurely, the key is to work on muscular endurance. By gradually increasing the duration of the rep and the intensity (bigger waves) in a systematic manner, you will see noticeable improved performance in your stamina.

Less injury-prone
For anyone looking to build lean muscles, battle ropes are an invaluable tool. At the same time, they possess lesser health risks compared to traditional weights training. Weightlifting injuries are common due the excessive stress on the joints and muscles, especially when performed without guidance or supervision. Battle ropes do not put such unnecessary stress as they are low impact. It sucks to be out of action due to training injuries so training with battle ropes minimize unnecessary downtime that is common with weights.

Versatility
Battle ropes training is a novel and fun workout to add to your routine. They can add some variety to your usual training and there are so many ways to train with them. Sick of training indoors? Battle ropes weigh up to around 30lbs at max and will fit easily in a duffle bag that makes them portable. The ropes can be brought outdoors to the park or beach where you can get some fresh air and a good dose of vitamin D from the sun while you work it up. All you need is an anchor like a pole or railing to set it up and you are all good to go!

There are 3 things to take note of when it comes to buying battle ropes: material, length and size. The 3 most commonly used materials are poly dacron (polydac), manila and nylon. Polydac is the best as it is hardy enough to be used both indoors and outdoors and will not shed. Manila (a natural fiber) ropes are generally less expensive but they tend to shed so they are more suitable for outdoor use unless you don’t mind cleaning up after each workout. Nylon is also a good material and doesn’t shed but may stretch and unravel over time.

Battle rope lengths go from around 20 ft to as long as 100 ft. The most recommended length for optimal exercise benefit is 50 ft as anything shorter becomes too easy in a short period of time. (Note: A 50ft rope will give you 25ft in each hand) Besides, it’s better to buy a longer rope since you can shorten it with knots but you can’t lengthen a shorter rope.

Size matter. The standard diameter to go for is a 1½ inch, which would fit most small and average-sized hands. If you are of intermediate/advanced fitness level or a well conditioned fighter, the thicker -and heavier- 2 inch is a better option or an eventual upgrade once you get accustomed to the 1½ inch. However, do note that the thickness can be difficult to grip for smaller hands. Our recommendation is to go with 50 ft by 1½ inch. Here are some of the best options available in the market:

This is one of the most highly-rated battle ropes available in the market. The form fitted handles make them easy to grab and allow for a multitude of workouts. The best part about the ropes are the nylon sleeves which minimize fraying and greatly extend their lifespan. Definitely my top pick of the moment.

Made with 100% poly dacron for durability and water-resistance quality, the Zeny is one of the most popular and best-selling battle rope options. A good, sturdy battle rope at a reasonable price.

The Nexpro battle rope is another sturdy and popular battle rope option. The ropes have comfortable handles and sturdy enough to withstand the abuse.


This is made of 80% poly dac with 20% polypropylene and comes at a higher price compared to a few of the other choices here. But if you fancy something more cheery, the EliteSRS ropes come in red/black, blue/black, silver/black and yellow/black on top of the usual all-black colors.

This looks like a knock-off of the Zeny battle rope with the yellow accent but comes at a more affordable price. It even has the same product description as the Zeny so they might come from the same manufacturers.

With a wide range of systematic exercise routines for strengthening and conditioning, battle ropes are an inexpensive yet effective training tool for Muay Thai. They will improve strength imbalances on the 2 sides of the body, build lean muscle mass, provide a killer fat-burning cardio workout, and efficiently condition your body to meet the challenging demands of Muay Thai. What are you waiting for? It’s time to make some waves!