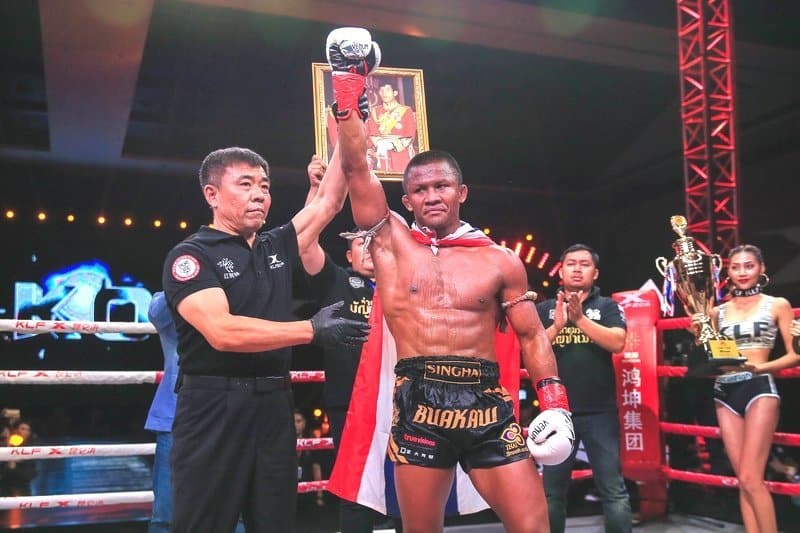 There is little to debate over when it comes to Buakaw’s contribution to the world of fight sports. This is a man who almost single-handedly raised Muay Thai’s status as arguably the most effective striking arts on the planet.

Even at the age of 35, he continues to smash his away across a trail of opponents and amassing even more fans along the way. With Buakaw, the word “legend” can feel like an understatement.

Over the last 2 years, Buakaw has devoted his time competing on Chinese Kickboxing promotion Kunlun Fight and his very own All-Star Fight. He has gone on a 6-fight win streak since December (or 11-fight win streak if you dismiss his second meeting with Yi Long) and he is showing no signs of slowing down while his popularity sees no sign of waning.

In a recent interview with the Chinese media (just prior to his stunning KO win at Kunlun Fight 67), Buakaw shared his thoughts on a few random but significant events in his life over the past year.

Buakaw’s fame is not confined within the realm of Muay Thai or kickboxing. He is a celebrated sportsman and public figure in his home country of Thailand, making the headlines regularly.

It was only natural that the Thai media went into a reportage-frenzy when the Muay Thai icon ordained as a temporary monk earlier in October this year.

Pictures of his shaven appearance sans eyebrows were plastered all over the web, especially piquing the curiosity of the foreign media. But this was actually not his first time entering the sacred life of monkhood.

“I have ordained as a monk for two times in my life. To be frank, I have to say that I wasn’t fully prepared for it the first time round. In Thailand, it is considered a rite of passage for all boys/men to ordain as a temporary monk at some point in their lives. I was not psychologically ready then, so I felt like I merely went through the motions.”

Buakaw added, “Many people asked why I ordained again. If you watch my fights, it’s apparent that I always walk out with a portrait of our late King Bhumibol Adulyadej Rama IX.

“For Thai people, we owe everything we have in the country today to our beloved King – he worked very hard for his people to have better lives. My ordination this time was done in remembrance of him. It is the last and only thing that I can do for him to show my utmost respect and gratitude.”

Part of Buakaw’s popularity in his native country comes from this relatable and down-to-earth quality. There is clearly no better candidate than him as the ambassador of Muay Thai, the country’s national sport.

During the 9-day stint as a monk, Buakaw dedicated himself fully to the spiritual life.

“I was able to fully immerse myself as a monk. During this period, my life was simple, revolving around performing chores, collecting alms, chanting, and Buddhist studies. If it weren’t for the prearrangement where I was already scheduled to fight (KLF 67), I would have liked to remain as a monk for a longer period of time.”

For many Chinese people, there has always been a fascination with monks. Blame it on a long history of Chinese kung fu novels and movies immortalizing Shaolin kung fu monks.

There is also an air of mysticism that surrounds Buddhism, which conjures up images of enlightenment or mastery of some special ability. This prompted further enquiry from an intrigued Chinese reporter who was perhaps, inclined to think along the same line. Buakaw responded matter-of-factly,

“Well, this (ordination) has nothing to do with fighting at all. As I mentioned earlier, it has to do with my tribute towards our King. It’s nothing like what you see in the movies, where the heroes go to the temple, attain some sort of superpowers, and emerge victorious over the villain. Nothing like that.”

And speaking of monks.

Many people -including Chinese fans- consider Buakaw’s loss against Yi Long (in their second meeting) a blemish on his fight record. The much-publicized “Fight of the Century 2,” a rematch between the 2 most popular kickboxers in China ended with an upsetting loss for the Thai fighter. Some even calling it the “biggest robbery of the century.”

The result is best described by the amusing words of a fan, a round-2 head-kick knockout that left Yi Long’s “bald dome strumming the ropes like a bass guitar chord”. And for Sitthichai, an easy, staggering 3.2 million baht pocketed.

Sittichai’s win over Yi Long was splashed all over the media. In another interview, Buakaw’s protege, Superbon responded that it wasn’t a big deal and that anyone can defeat Yi Long. Buakaw had to cover his smile and hide his amusement at the comment. His own take on the whole matter was less brutal.

“The fight between Sitthichai vs Yi Long is just as what everyone saw. It is what it is: a kickboxing match and the better man won. He who is ill-prepared has to be prepared to lose, there is all there is to it. There really is no need for me to comment further.”

That sums it all up quite eloquently.

On a totally different but joyous note, Buakaw recently graduated with a bachelors degree in Business Administration from Rattana Bundit University after juggling between his studies and career over the past 4 years.

“There is a desire in everyone to acquire knowledge, learn new things, and enrich themselves. I am delighted to receive this certification, having completed my course of study. Outside of my professional career, I feel there is a need to constantly work on self-improvement. I was also able to make my family proud with this academic achievement.”

Given his background as a world-famous athlete, it would have been less effortful if he had gone into a sports science or similar field of study.

“There was no need to learn about sports science precisely because of my background as an athlete. We are already thoroughly equipped with the knowledge through practical experience.

“I wanted a challenge. As such, I find there is a necessity for me to take up a course that was outside the scope of my work; something that was completely foreign. I ended up choosing business administration because I know it is something that would definitely benefit me in the future of my career. I hope to explore other areas in my line of work in the future. It (the course) was tough for me at first, so I am extremely delighted to be able to graduate successfully. The certificate is also a recognition of my knowledge.”

Questions were also directed towards his bachelorhood of the other kind. He replied jestfully,

“I think everyone goes through these different stages and life is journey that will end at some point in time. My priority right now remains in my role as a fighter, or even the ‘legend’. If I accomplish all of the milestones (marriage, kids) now, then you reporters would have no questions left for me to answer in the future.”

He punctuated his reply with a wry smile.

Among his other accomplishments this year, the prolific celebrity found time to star in a Thai period movie titled Thong Dee Fun Khao (Broken Sword Hero), model for his line of apparel for Singha life, and work with manager, Teerawat Yioyim to build the “Banchamek Village”, a massive project set in the mountains of Chiang Mai. Retirement doesn’t seem to be anywhere on the horizon but Buakaw has pondered over his legacy and future.

“Whether or not I will be looked upon or remembered as a legend, I have shown and proven that Muay Thai is indeed one of the most effective combat arts in the world. It has held up against all other striking arts and I am proud of what I have accomplished. There is no doubt that I will look back upon my career fondly, having competed all around the world. After retirement from the ring, I will most likely remain in this industry albeit taking on a different role.”

Buakaw’s professional success has little to do with clever marketing but more to do with his steel-like dedication. He’s known to train much harder than anyone at the camp and running longer distances than younger fighters on a daily basis.

During this last monkhood, he was given the monastic name of “Phra Thira Wiriyo,” which means “one with true perseverance.” There is not a name more befitting than that.

According to frequent collaborator and well-known fight promoter, Sasan Ghosairi, Buakaw leads a fiercely-disciplined lifestyle with no room for partying or vice.

Outside of a tough training regime, the superstar leads a humble life preferring to bask in idyllic nature of the countryside or indulge in the simple pleasures of fishing. Truly It’s not hard to see this is a legend like no other.

The man, the monk, the myth, the Muay Thai fighter, and the movie star. As the list of impressive titles accumulates, so the legend continues on his journey.

1 thought on “Buakaw: The Legend Continues”