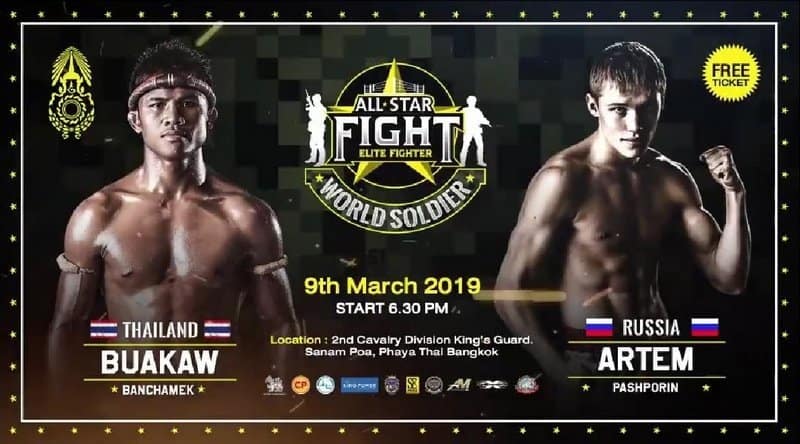 First hinted at on the All Star Fight Facebook page, World Soldier has surpassed all expectations when the lineup was announced on 13 February. The organizers, supported by the Royal Thai Army for this special occasion, have brought together the current top Thai fight stars for the global stage of Muay Thai.

There is no doubt that the most anticipated fight for the event would have to be the main event showdown between the promotion’s leading man, Buakaw Banchamek and Russian kickboxer, Artem Pashporin.

This would actually not be the first meeting between the two fighters. Buakaw last faced Pashporin in the ring back in 2015 for the one-off T-One Muay Thai event which took place in Beijing, China. Staged at the massive Olympic Sports Centre, the headlining bout saw Buakaw dominating all 3 rounds to walk away with a convincing victory.

Nicknamed “Cowboy” for his distinctive walk-in headgear, Pashporin could potentially give Buakaw a run for his money in their second faceoff. Since their last bout, the Russian kickboxer has taken on many of the world’s top stand-up fighters including Giorgio Petrosyan, Superbon Banchamek and even bested 3-time Rajadamnern champion, Jomthong Chuwattana. He has also picked up a few titles along the way including the WMC European champion last December.

At the age of 26, Pashporin is much younger than his upcoming opponent. The 10-year age gap may however, offer little advantage for the Cowboy as he goes head-on against an experienced global fight icon who looks to still be in the peak form of his life.

Buakaw has headlined each edition of All Star Fight since the promotion was launched in 2017. The Thai superstar had also collected the victory cup for all seven appearances including a spectacular TKO win in the last show. Over the last few years, Buakaw proved time and time again that he is still at the top of the game, shutting down all critics who ever had any doubt of his place even in the current competitive fight scene.

All Star Fight: World Soldier is set to take place on 9 March in Bangkok city. Other than Buakaw, Thai fighting superstars like Superbon Banchamek, Yodwicha Banchamek, Superbank Mor Rattanabandit and Fonluang Sitboonmee have been confirmed for the show.

The event will be staged at the the home of 2nd Cavalry Division King’s Guard, located just beside Sanam Pao (BTS) skytrain station. Admission is free and it’s an event you definitely don’t want to miss!