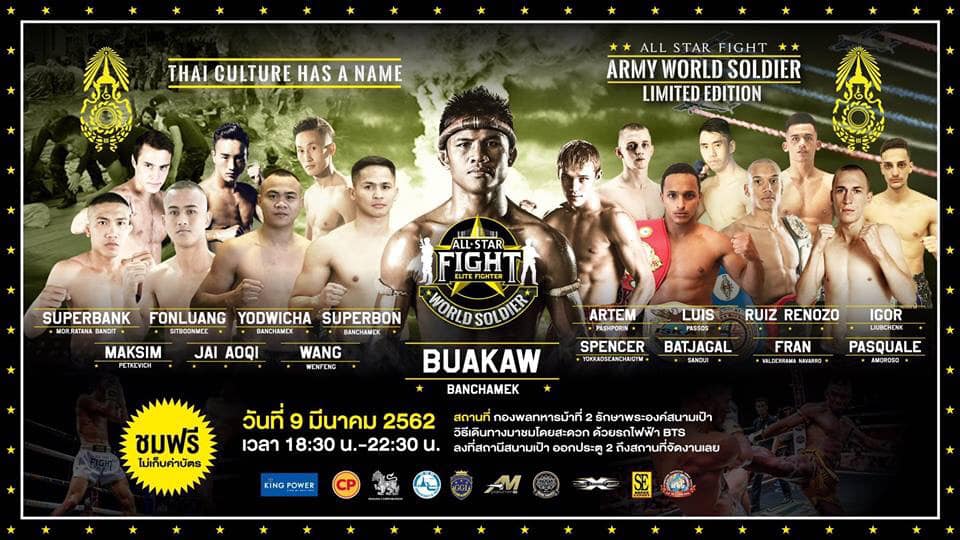 With one of the most star-studded card in Muay Thai history, All Star Fight: Army World Soldier is officially the most anticipated event of the moment. Since its announcement, fans around the world have been hyped up for this phenomenal show.

Just 2 weeks ahead of fight night, the lineup has been altered and the promoters have recruited a couple of renowned soldier-fighters for the replacement.

Superbank Mor Rattanbandit and Fonluang Sitboonmee have now been confirmed to step in for Army World Soldier. Superbank is the more prominent of the two, having held numerous titles of prestige from both Rajadamnern and Lumpinee stadiums. The Teeded-99 gym fighter is also the recipient of multiple Fighter of the Year awards between 2014-2015. Superbank has responded honorably to the call-up in spite of his 23 March headlining bout at Yokkao 37 in UK.

Now that the fight card is officially finalized, All Star Fight: Army World Soldier is primed for action. The organizers have confirmed the venue for the 9 March event and it will be staged at the home of 2nd Cavalry Division King’s Guard. The location is situated beside Sanam Pao (BTS) skytrain station for the convenience of fans who are attending the show which will be free admission.

Here is a look at the updated fight card: