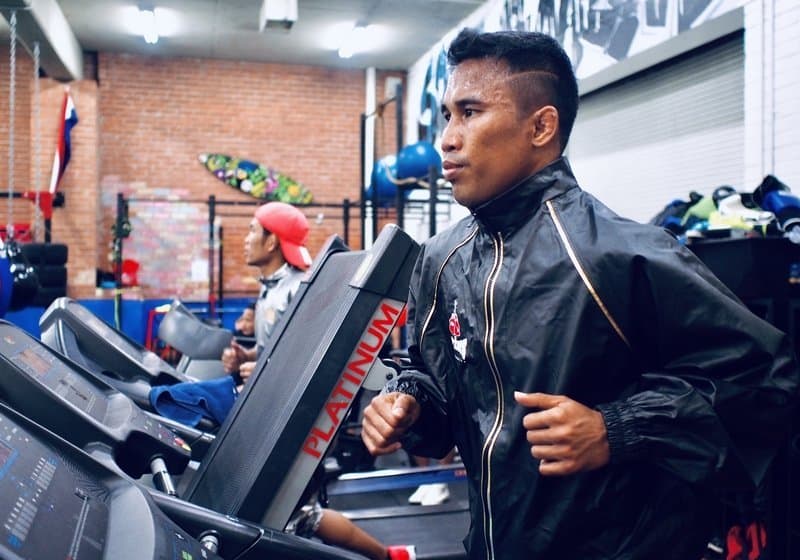 “I have always thought that weight cutting takes away from the whole beauty of martial arts. It should be about showing off your skills to the best of you ability and enjoying performing in front of a crowd. It shouldn’t be about weight cutting.”  – Kaitlyn Tucker

Every time a fighter dies cutting weight, promoters shake their heads and say that something must be done. Scott Tweedie, muay thai promoter and trainer at Lucky Nine Gym, and president of Aotearoa Muay Thai Association (AMTA), has done something about it.

Scott was devastated by the death of Jordan Coe who died in a sweat suit cutting weight in Bangkok in 2017, two years after the two had met and trained together for a month in Thailand. He wanted to make weigh-ins – a component of fighting that ensures that combatants are of equal weight – safer. He found a way to do it: hydrated weigh-ins.

I talked to Scott about why he is a proponent of matching fighters at hydrated weight. I also speak with Asher Bennie, fighter and qualified nutritionist, and with Kaitlyn Tucker, current AMTA light welterweight New Zealand champion and ISKA Women’s South Island Lightweight champion, about their experience of weight cutting.

“The idea of cutting weight is flawed,” Scott told me. Not only does the weight cut compromise a fighter’s health, it also compromises their performance. Weight cuts compromise fighters’ strength and power. “Why not see better fights with stronger fighters whose strength and power and not been compromised by a weight-cut?”

Scott came up with his own system, and he invented AMTA – a sanctioning body that now has 24 gyms on board – to run and sanction shows with hydrated weight cuts.  “When fighters weigh in, they are also randomly hydration tested.” I ask Scott how he does this. “It was easy as buying an electronic body scanner,” says Scott. “Basically, 50 dollars.”

AMTA requires fighters to make the required weight fully hydrated. To further ensure that fighters are at walk around weight, fighters also have to weigh in the next day, an hour before the fight. They are allowed a 1.5% difference in their body weight from the official weigh-in day. In order to accommodate for natural weight fluctuations during menstruation, female fighters who are menstruating are allowed a 2-3% variation in weight.

As a trainer,  Scott says it is important for him to see his fighters leave the sport healthier and more evolved than they were when the began the sport. “I don’t want them leaving it with unhealthy eating habits and whatever health implications might go with that.” The fighters at Lucky Nine Gym all enter fights fully hydrated, and the gym does not accept fights where the opponent is known to be cutting over 5kg.

As a promoter, Scott took this mentality of developing people not just fighters, and evolved the system of hydrated weight cuts. He was initially excited by the innovative, new method of “percentage based weight cuts” over a period of 4 weeks prior to fighting which was introduced into some NZ promotions, but he wanted to improve on it. The system of percentage based weight cutting required fighters to send video footage of themselves on the scales at defined percentage decreases of their fight weight at specified intervals in the lead up to weigh-in day.

“Unfortunately, it meant that people were cutting weight four times instead of once,” said Scott. “They would cut the required weight, send the video in, and then return to their walk around weight. It was an excellent start, but I thought I could further improve the initiative.” Thus AMTA hydrated weight cuts were born.

I spoke to Asher Bennie fighter (9 fights) and qualified nutritionist in New Zealand. Asher spoke about the general lack of knowledge in gyms about weight cutting – and even regaining weight after a weight cut.

“I encountered a huge lack of knowledge about weight cutting, and about diet and performance generally. There is also a surprising amount of secrecy: fighters tend not to talk about and share their weight cutting experiences, so they don’t learn from the collective experience.”

Asher observed the manifestation of unhealthy eating behaviors: fighters obsessively weighing food and themselves, and then binge eating post weigh-in.

“It also sets an unhealthy example for young, up and coming fighters: they would see us weighing ourselves all the time, and they started to do the same. There is a danger of getting obsessed with numbers.”

Asher, who has experienced weighting cutting via both the traditional dehydration method and the newly introduced hydrated method, notices a difference in her performance.

“I fight so much better when I weigh in at a hydrated weight. I can think better, and I am not worrying about making weight, then worrying about rehydrating after the weigh in. It allowed me to focus on fighting rather than on weight cutting. ”

Asher thinks that hydrated weight-ins are both physically and psychologically performance enhancing.

She describes the ordeal as so draining, that during some weight cuts, her trainer had considered not allowing her to fight due to her poor physical and mental state. A times, the ordeal almost caused her to walk away from the sport.

Kaitlyn describes how hydrated weigh ins have helped her conceive of a whole new approach to fighting. She might drop weight, but never water weight. Like Asher, she observes healthy eating practices aimed at gradual weight reduction to reach a long-term, sustainable weight for fighting and training.

“It’s 100% easier mentally, physically and emotionally. There are no health risks, and my body is not stripped of water and nutrients. Dieting is involved, but that totally beats having to do a weight cut!” Kaitlyn also reports sleeping better without the stress of weight cutting.

“I have always thought that weight cutting takes away from the whole beauty of martial arts. It’s about showing off your skills to the best of you ability and enjoying performing in front of a crowd. It shouldn’t be about weight cutting.”

As more and more fighter report less stress and greater performance with hydrated weight cuts, Asher hopes that more promoters will be taking up the cause. “We want more  promoters to get interested in matching fighters at their walk-around weight.” If they do, New Zealand may well become a leader in promoting healthy habits in the global muay thai community.

1 thought on “Cutting Out Weight Cutting”