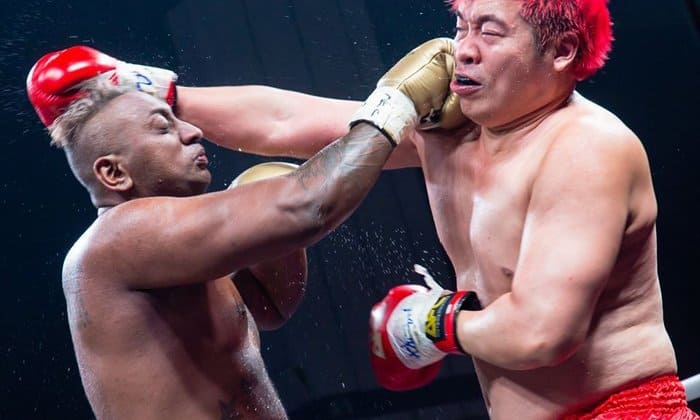 Back at my home country of Singapore, tragedy struck the martial arts community of Singapore with the passing of Pradip Subramanian at a heavily publicised fighting event.

Billed as a celebrity fight, the match-up between Steven Lim and his original opponent, Sylvester Sim, was clearly a publicity stunt that successfully brought heaps of attention to the event. The supposed feud (more like childish squabble) between the 2 minor celebrities has built up for years which resulted in the proposed “Fight of the Century” at the Asia Fighting Championship (AFC) inaugural event.

The 2 had taken to posting feverishly training photos on their social media accounts in the weeks leading to the fight and just a day away from the event, Sylvester pulled out citing a lack of proper insurance coverage. According to Steven Lim though, Sylvester had pulled out after a minor injury sustained during a “test spar” between the 2 that took place 2 weeks back, suggesting an alternate reason for the last-minute backing out.

Steven Lim is something of a cult figure in the local media space. His claim to fame was an audition in Singapore Idol, the reality television singing competition way back in 2004. In the audition, Lim stripped down to a pair of eye-blinding yellow triangle trunks while performing an off-key rendition of Ricky Martin’s “She Bangs”. Gyrating and all. He has been dismissed by most locals as an attention-seeker of the highest order, a severely persistent one at that. 13 years on since his TV debut and he’s still in pursuit of elusive stardom.

Pradip Subramanian was the World Bodybuilding and Physique (WBPF) Singapore president and a well-beloved figure in the community. Pradip had reportedly started training kickboxing since the start of the year and had big plans for the bodybuilding sports in the region.

At the weigh-in, Steven Lim came in at 95.5 kg (210 lbs) and Pradip at 99.9 kg (220 lbs). Steven’s original opponent Sylvester Sim had been bulking up with weights-training in preparation for the fight but would still looked to be a good 20 kg short of matching the former’s 95.5 kg. Sylvester may have been training Muay Thai for a number of years but this advantage in fighting ability may be worth zilch in the blink of an eye when a 95.5 kg weighted-fist lands in his face. No one can predict the outcome if it had been Sylvester in the ring but the reckless decision and the flippant match-making could have been equally disastrous.

On fight night 23rd September, the match between the 2 inept fighters played out like it is, with Steven Lim swinging wild but blind random shots looking to score a luck-based opportunistic KO win. The lack of fitness was apparent not only through their physical shape but the fact that both were gasping for breath barely half-way into round 1. Pradip’s head start in training kickboxing gave him an advantage as evident in his dominating performance in the first round. But round 2 came and everything went down the hill. Pradip was visibly shaken after receiving Steven’s heavy swinging right punches that left him stumbling onto the ropes and canvas. The fight ended that instant when the referee consulted with the officials after seeing Pradip getting a nosebleed and Steven was declared the winner via TKO. The crowds roared, cheered and laughed as the comedic winner had emerged victorious when no one expected. As the winner celebrated his victory, Pradip was stretchered off the ring.

Things took a dark turn and Pradip was sent to the Singapore General Hospital. Around 2100 local time, he was pronounced dead. Initial speculation of concussion was dismissed and preliminary medical report released by the hospital suggests cardiac arrest respiratory failure led to the passing. A complete final medical report will be released in 30 to 60 days.

Professional combat sports is no joke. No one transitions into professional fighting with just a few weeks or months of learning to fight and being ill-prepared. Even a seasoned fighter would have second thoughts on accepting a fight with just 1 day’s notification. Fighters learn to put in the grind to build endurance and condition their body and many take years to transition from amateur bouts to pro-fighting. One Championship CEO, Chatri Sityodtong gave an insightful take on the incident that might have otherwise prevented it:

“The vast majority of first-timers in the ring will have proper training, basic defensive skills, reasonable technique, adequate preparation time, safety protective head gear and shin pads, etc. After watching the video of the fight, I can assure you that Steven and Pradip had almost zero knowledge of how to protect themselves, let alone how to execute any martial arts technique. They were both complete beginners. Defensive knowledge comes through technique absorption/repetition, reflex/reaction drills, controlled sparring, etc. To make matters worse, it is my understanding that Pradip had only 24 hours notice to compete, and did not even have a training camp for the bout. Lastly, it was evident that both Steven and Pradip were in no shape to compete as both demonstrated zero cardio fitness. This fight was a publicity stunt without regard for the risk of human life.”

Steven Lim has come under fire on social media, with many local netizens lambasting him for the death of Pradip. But is it really fair to blame him? What about Pradip himself, who was roped in for the fight as the last hour, and clearly had no time to prepare for it? They may both have an inflated opinion of their own fight skills and ability, but then again, it is always easy and unfair to make grand statements in hindsight.

AFC chief executive Sasidharan Unnithan has stepped up and issued a statement clarifying that all fighters were required to have a medical check-up and sign an indemnity form, insisting that there were no safety lapses. It is unknown if there was a medical team on-site to perform the medical check-up. The fact remains that these were 2 men who weren’t even trained adequately, and asked to step in the ring and fight without protective gear as nominally required in amateur bouts – an accident waiting to happen that actually happened. The AFC organizing team surely did not wish for this to happen and if the tragedy had not taken place, everyone would have just looked upon the fight as a joke and the inadequacy in the promotion of this event swept under the carpet.

It is truly a tragic event for both Pradip’s family and the Muay Thai community, but hopefully grave enough for the sanctioning associations and authorities to look into stricter governing of professional fight sports. Lastly, may you rest in peace, Pradip.