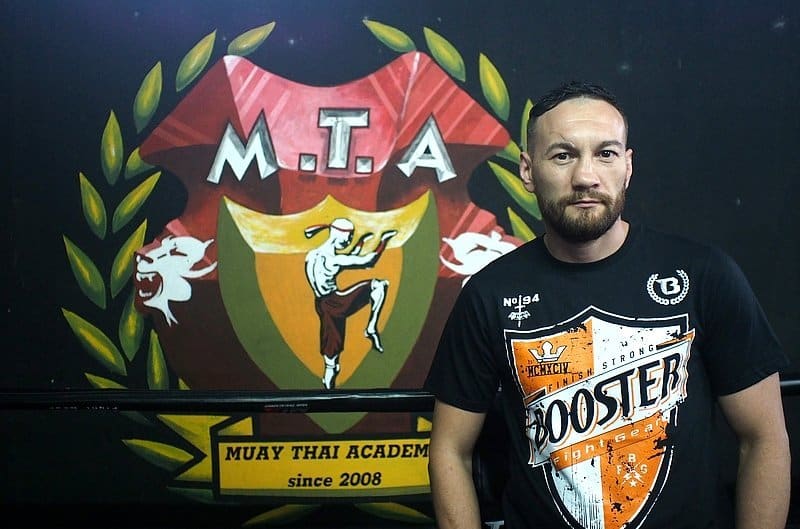 My first visit to Bangkok’s Muay Thai Academy (MTA) took place back in July of this year where I interviewed kickboxing sensation, Superbon Banchamek. While the gym itself isn’t spiffy like many modern Muay Thai facilities, I came to discover that there is a lot going for this camp. The fact that Superbon has adopted MTA as his home training base in Bangkok says a lot of the reputation and quality.

Here’s a rough history of the camp. The camp was originally named after the Rompo Mansion (apartment complex) when it started. In fact, it retains the name today and some people still refer to the physical gym as Rompo Gym, and the fight team as MTA. In its early years, Rompo gym trained and frequently received top foreign fighters that included most notably Russian welterweight champion Dzhabar Askerov.

The camp’s original owners fell apart and well-known promoter, Sasan Ghosairi signed on as a co-owner operating the MTA fight team at Rompo since 2008. Ghosairi works -and has worked- for countless promotions over the years. It was a natural progression to build his own team of fighters to facilitate match makings at all the events.

Something around April this year, Russian kickboxing champion Rustem Zaripov signed on as MTA’s manager and coach.

Foreigners coming to Thailand have no problem getting fights in the country. Promotions are aplenty and trainers at Muay Thai camps get a monetary incentive for putting foreigners on shows. Beginners and first-timer visitors often find themselves up against tuk-tuk drivers in the ring. However, getting good-quality, well-matched fights on high-profile promotions is a different story. Fighters who are serious about their craft need to be well-connected via their gyms, if they wish to further their careers in the sport. This is where a gym like MTA comes in.

Through Ghosairi’s and Zaripov’s links and reputation in the sport, fighters at MTA have fought on countless reputable events. Some of the more prominent promotions include Kunlun Fight, Thai Fight, Yokkao, and most recently on All Star Fight where fighters got to share the stage with fighting icon Buakaw Banchamek.

Today, MTA manages about 10 full-time fighters with the help of 3 trainers including Zaripov himself. Fighters from out of town or other countries also stop by from time to time for fight camps. MTA is a “United Nations” camp with athletes coming from all around the world including Australia, Thailand, China, Mongolia, Russia, Uzebekistan, America, Brazil and the list goes on.

MTA’s number one pad-man is veteran trainer, Kru Lek. The 58-year-old played a pivotal role in Rompo Gym’s heydays, helping to build the camp’s numerous champions. Kru Lek remains a key figure at MTA as he continues in shaping a new generation of fighters.

Zaripov himself comes with a wealth of experience, having competed for 17 years as a fighter. He transitioned to coaching in 2013 not long after his encounter with Buakaw on Thai Fight. Since then, Zaripov has also worked as a promoter on various events and managed Russian kickboxing legend Muslim Salikhov for 4 years before the latter’s transition to MMA.

Training at MTA is hard like all Thai camps with 2 sessions a day, 6 days a week. Trainers focus on traditional Muay Thai or K1-style kickboxing depending on the fighter’s competitive needs. The fighters also undergo strengthening and conditioning to improve overall performance.

The team at MTA hopes to nurture more fighters from around the world, helping to grow them in their fighting careers. With great competing opportunities and a supportive training/management team, this is an ideal camp for young athletes hoping to further their fighting careers. Sponsorship is provided by the gym as well as Booster Fight Gear for promising young fighters. The gym is also open to visitors of all levels looking to train for fights or just to keep fit. Visit MTA social media pages (see below) or contact them directly for more information.

How to Get There

If you are going by the subway, the nearest station is Queen Sirikit National Convention Center (QSNCC) MRT station. It is about ½ a mile (1 km) walk or alternatively, hop on a motorbike taxi and ask to be taken to “Rompo Mansion” which is a hotel/apartment complex. As of writing, motorbike taxi will cost around 40-50 baht from Asok/Phrom Pong BTS stations and 20 baht from QSNCC MRT station.