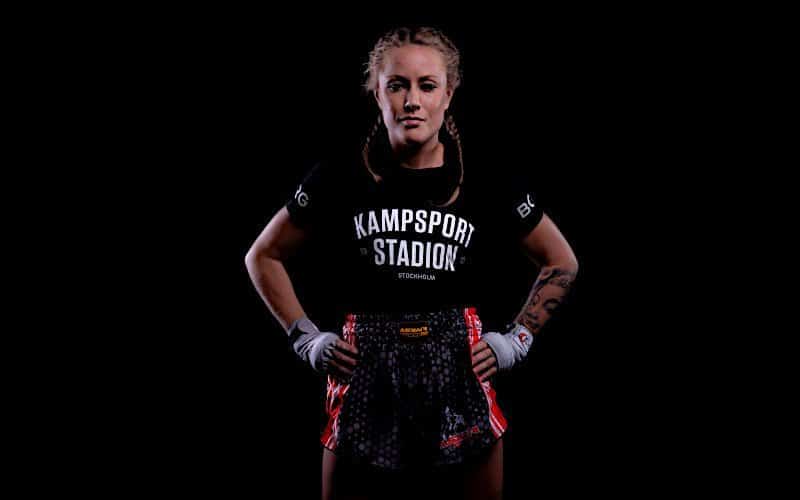 As necessary as it is, the current activity ban is frustrating for many fighters and trainers. For professional fighters and their trainers in Thailand, the necessary cessation of fights has generated a financial crisis of some magnitude: for many, fighting was their primary – often only – source of income. My thoughts are with these people, and I was pleased to read that the Thai government is offering financial relief to registered trainers and fighters.

Facebook, Instagram and Youtube are a testimony to the toughness and dedication of many trainers. It is inspiring to see pictures and videos of fighters shadow boxing and making innovative new training arrangements.

Swedish professional fighter, Sandra Godvik, who lives in Phuket, Thailand, has strapped a body pad to a tree in order to continue training round-house kicks. She says it is really frustrating not being able to fight. The 3 x WMC Swedish Champ and WMC European Champion continues to train twice a day, although she’s had to become really inventive.

Sandra typically runs 4-10km each day, hits pads, spars and does bag work.  Covid restrictions, however, require people to stay home, and gyms to remain closed, so Sandra skips and does strength training instead. She invented her “treebag” as a substitute for bag work. I don’t have a bodypad, but I do have a 2kg medicine ball, and a brick wall: it’s not the same as punching a bag, but it’s something.

For many professional fighters who have alternative sources of income, the lack of fights doesn’t represent a financial challenge so much as an identity crisis: are you a fighter if you are not currently fighting? It’s one thing to continue training and maintaining fitness, but for a fighter, you really only train for one reason: to fight. The innovation and commitment of fighters like Sandra can only get her so far: Sandra can train by herself, but she can’t fight herself.

So, how does one deal with the lack of fights? While coronavirus has stopped fights completely, many fighters are used to dealing with frustratingly long, non-fight periods. Sometimes, the business of fighting is more about waiting: you can be fit and ready and training full time… and waiting for months at a time for a fight to materialise.

I’ve been active and fight ready for more than nine years, but I’ve yet to have my 37th fight, and getting most of those 36 fights to go ahead has been arduous: at 61kg, there just aren’t a lot of female opponents. There can be a few reasons for fighter inactivity such as weight class, gender and experience level.

Fighters outside of popular weight classes will typically accrue fewer fights across their career. This also varies between countries. A 50kg female fighter may struggle to be matched in many western countries, but will find matches in Thailand where women generally weigh less than their western counterparts. A 100kg male fighter, however, is going to be a lot less active than his 65kg male counterpart in any country: heavyweight fighters are rare.

Females generally find it harder to find fight opportunities. Fighting is a male dominated sport, and participation levels in professional Muay Thai in Thailand – the mother country of Muay Thai- are heavily influenced by gambler demand and promoter interest: males but not females supply the fighter ranks of the great Bangkok stadiums – New Lumpini, Rajadamnern, Channel 7 and Omnoi.

According to Frances Watthanaya, former fighter who runs a not-for-profit gym in Isaan, there is less demand for female fighting amongst gambling circles in female friendly fighting stadiums. This is not because female fighting isn’t spectacular, but because gamblers are less familiar with the individual female fighters due to their comparative inactivity with their male counterparts.

Inactivity is due to lack of opponents. In turn, infrequency of fighting leads many fighters to divide their energies between professional fighting and alternative sources of income, further weakening the ranks of female fighters.

Having said that, there are female fighters who have illustrious fight careers. They too, however, reach a glass ceiling when they have achieved levels of greatness that make it difficult for them to find fighters who can match them at their level.

Lommanee Chalamnoy who boasts a fight career of over 100 fights, reached a point where nobody would fight her. She’d fought the famous Loma Lookboonmee 5 times (4 to Loma, 1 to Lommanee) and was facing premature retirement through lack of opponents. Fortunately, her prospects changed when she was offered new management seeking overseas opportunities for her. She’s recently been active in China and Europe fighting outside of the Muay Thai discipline and 4kg above her normal fight weight.

What Muay Thai teaches you in many ways, is that a fight career – like life in general – is about training hard in anticipation, recognizing that much of what happens to you is outside of your control, and then digging deep and responding in the best way you can. It also teaches you that you don’t always get what you want in life, no matter how hard you work: perhaps that is why it is so important to love the training itself, not just the fighting.

That said, hopefully Thailand will soon safely contain the pandemic, gyms will once again open their doors so that trainers can be paid, and stadiums will open again. Hopefully Sandra can defend her Bangla and Patong stadium belts, and thousands of fighters can return to their profession.

Parts of this article first appeared in Rough Asia