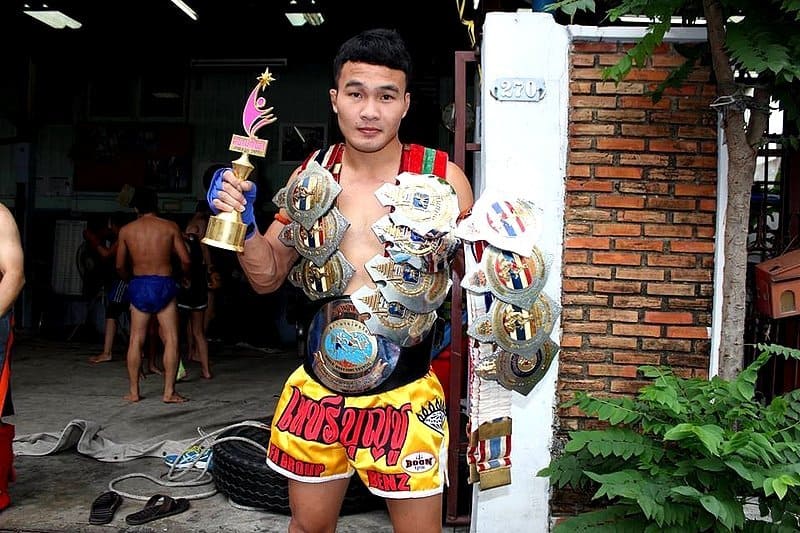 Let it first be said that Muay Khaos (knee fighters) aren’t exactly the most entertaining Muay Thai fighters to watch in the ring. But everyone knows that it is a style that gets the job done, especially when adopted by the right exponent like Petchboonchu FA Group. It bears repeating that Petchboonchu has held 14 titles of the highest level in his career, thus being honored as the most decorated Muay Thai fighter in history. This is not an easy feat, by any means. Petchboonchu earnestly fought his way across fight different weight divisions using a sheer unrelenting forward-moving clinch-and-knee style.

Born Yukthapong Sitthichoke in the Thai province of Udon Thani, Petchboonchu started competing in Muay Thai at the age of 7. By 13, he was scouted and brought over to train at the Bor Pla Boonchu camp in neighboring Nong Khai province, right by the river Mekong. There, he was given the fighter name of Petchboonchu Bor Pla Boonchu. His newly-christened first name can be translated literally as “Diamond Supreme” or the “Ultimate Diamond”. It wasn’t a fighter name he was particularly fond of but it stuck with him ever since. 2 years later at the age of 15, the diamond in the rough shined through to win the first of his 14 elite titles: the Thailand Champion at 48kg. He was dubbed “the Killer Knees of Mekong”, in reference to his knee fighting prowess and his camp’s original geographical location.

Bor Pla Boonchu gym would then relocate to Bangkok in 2006, and found their new sponsor, FA Group (food additives company) from which they draw their current camp name. It was there and then that Petchboonchu FA Group single-handedly brought the camp and its signature clinch-and-knee style into prominence on the elite Muay Thai circuit. He shared his thoughts on what it means to be a Muay Khao.

“The clinch and knees go hand in hand, for the most parts. Knee fighters like myself, are typically taller, as taller people tend to have an advantage inside of the clinch to drive in powerful knees. That’s one of the reasons I started to adopt the knee fighting style. You have to find out what your strengths are and double down on those – for me, it’s my clinch and knees. i use them to push the pace, overpower my opponents and get the win.”

While some observers are of the opinion that knee fighting is a less elegant and less “intelligent” style, the knee-fighting phenom begs to differ.

“A Muay Khao requires a lot of power and stamina in order to overpower the opponents. I would argue that the statement of Muay Khao being less technical than other styles, is simply not true. Muay Khao involves a lot of intricacies in the clinch, and it is a very technical part of Muay Thai. In that sense, knee fighting can be as technical as any other styles. It’s a high fight IQ style as any.”

But before you jump on the Muay Khao bandwagon, Petchboonchu explains that finding your own style in Muay Thai is often more of a natural process.

“For me, it was something that came naturally to me as a fighter. When i started training, i didn’t know if I was a Muay Khao, or Muay Mat (aggressive fighter) or Muay Tae (kickers). When you first begin, you don’t really have that identity. As you start to train, you become aware of what you are good at and what advantages you have. Then you go and pick your style – it isn’t a decision you pick just as soon as you start training. Muay Khao style came to me naturally and it also suited my physical attributes of being taller (than the average Thai fighter). Another factor was of course my camp as it focuses a lot on the clinch, which played a part too.”

In 2016, 14 championship titles later and at the age of 26, Petchboonchu announced his move to Singapore where he now works as a Muay Thai instructor at Evolve MMA.

“I decided to retire from fighting in Thailand because I had achieve everything that I set out to do. I conquered a lot of challenges and goals that I set for myself – I was satisfied of what I was able to achieve. At the same time, an opportunity arose for me to become an instructor here at Evolve MMA. I saw that as a chance to pass on the Muay Thai knowledge I had acquired throughout my career and also, it was a chance to have a stable career and income. This allows me to set myself up for the future and provide for my family. As a Thai fighter, income is never guaranteed as you won’t know when you are going to fight next, you might sustain injuries, your opponent might pull out so income is never steady.”

Petchboonchu turns 28 this year and while he has retired from the Thailand stadium scene, fans are now looking forward to his return to professional fighting on an international stage. Asia’s top MMA promotion, ONE Championship recently announced a new Kickboxing/Muay Thai league dubbed ONE Super Series. A star-studded cast has been lined up that includes Giorgio Petrosyan, Yodsanklai Fairtex, Fabio Pinca, Nong-O Kaiyanghadao, and Petchboonchu himself. The clinch supreme will be competing in the caged octagon with 4oz MMA gloves under full Muay Thai rules, with an yet-unannounced date and opponent.

“I decided to come back and fight for ONE championship because this is a new, exciting challenge for myself. I am given a chance to fight on a bigger, international stage against fighters from all across the world. This gives me new goals to achieve in the next phase of my fight career.”

Petchboonchu has faced no less than the best in the biz throughout his fighting career. He has fought and won against fellow knee fighting experts like Singdam, Yodwicha, Sagetdao, and top technical specialists like Pakorn and Chamuaktong. More impressively, he also holds 3 wins in 7 meetings against the greatest fighter, Saenchai who was at the peak of his career. As a saying goes, “everybody wants to be a diamond, but very few are willing to get cut”. He attributes the success to pure grit.

“I definitely do not consider myself someone with born-talent. When i was young, i was very weak, frail and skinny and I was a bit knock-kneed (knees bending inwards). I would fall over very easy when I started training. I was only able to get to where I was through hard work and mental toughness. I believe there are 2 types of fighters in this world: some are born with a lot of talent like Nong-O and Saenchai; and then there are people like me who don’t have any talent but I achieved success through determination and grit.”

There is not an ounce of doubt that it takes a rare gem to become the most decorated Muay Thai fighter in history. For Petchboonchu, the “Ultimate Diamond” fighter moniker may just be as apt as it can get.