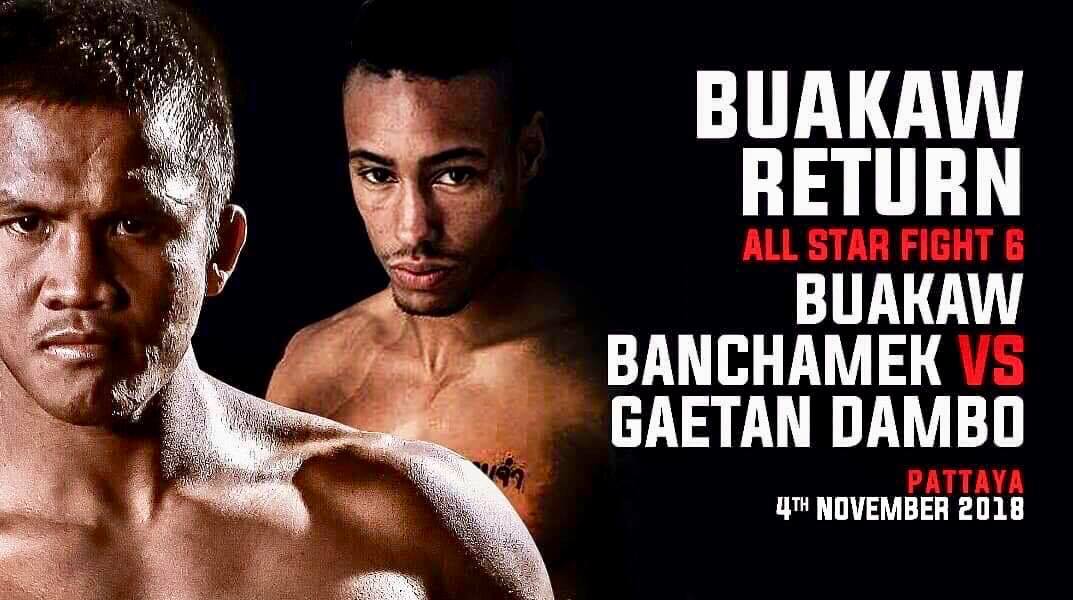 It’s been quite the wait for fans of Buakaw and All Star Fight but it’s finally back again. All Star Fight 6 is set to rock the stage in Pattaya city’s J.F. Boxing Stadium this coming Sunday 4 November.

Buakaw is matched against French fighter Gaetan Dambo in the main event. With 30 fights and 21 wins, Dambo’s heading for the fight of his career against the Muay Thai superstar. Buakaw himself is coming off an undefeated run on All Star Fight and judging from his training videos, he looks bent on extending the campaign.

A total of 5 fights have been lined up for Pattaya with the “Thai vs foreigner” format as per previous shows. Other than leading star Buakaw, former Lumpinee and Thailand champion Pakorn PKSaenchaiGym will also return to the All Star Fight ring. Another familiar name on the card is Sudsakorn Sor Klinmee who will be making his debut for All Star Fight.

All Star Fight has come up to be one of the most popular Muay Thai promotions as it is one of the few events to catch Buakaw in action. Its last outing in Prague was telecasted on Fox Sports which is an amazing feat for the still-underappreciated sport.

Tickets for All Star Fight 6 are now on sale at J.F. stadium at 2000 THB for standard seats and 2500 THB for VIP tickets. Alternatively, tickets can also be purchased by emailing sxsbank@gmail.com and payment via PayPal. Show starts at 6:30pm on Sunday 4 November. This is Buakaw’s 6th fight appearance this year so it’s one not to be missed.

Check out the full fight card:

2 thoughts on “All Star Fight 6 Ready to Rock Pattaya”