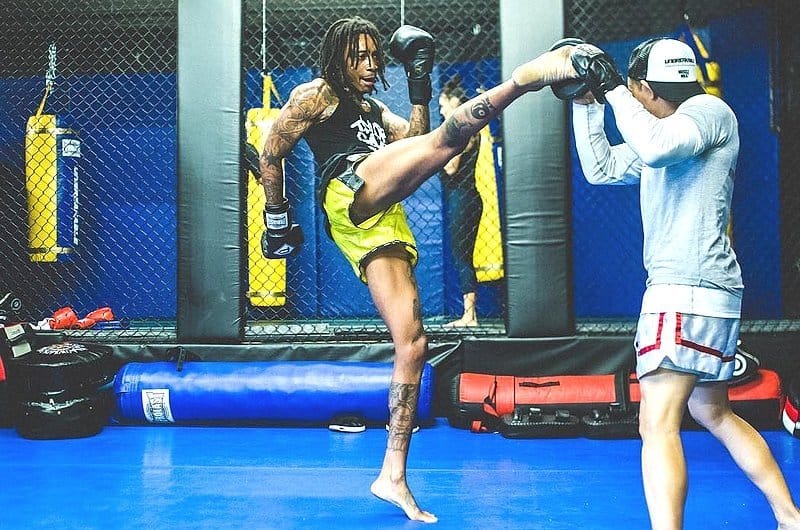 American rapper, singer-songwriter and actor Wiz Khalifa has been getting serious training Muay Thai and BJJ and working on his physique in the past year. The tall and lanky celebrity has been gaining some muscle mass over his formerly-skinny frame.

Last week, Wiz Khalifa was spotted showing off his toned body after a workout in the gym while casually rocking a pair of Yokkao Carbon shorts. It appears Wiz has developed an ongoing obsession for the short-stylin’ of Muay Thai as this would not be the first time that he was seen in Yokkao Carbon shorts.

Last month, he also appeared geared up in a pair of blue Vintage Carbon shorts for a boxing-theme photoshoot with his Brazilian model girlfriend, Isabela Guedes.

Not forgetting a video he posted of himself on Instagram dressed in the an emerald green Carbon shorts, working up quite a sweat in the gym. Seems like he really favors retro Muay Thai shorts.

The short-stylin’ of Muay Thai shorts has always been an unique feature of the sport and the general American public who isn’t familiar with the sport remains seated on the fence with respect to Wiz’s Muay Thai fashion sense.

Some have called them “booty shorts” and others calling for Wiz to “give your girl back her shorts”, inferring that short shorts are more of a feminine thing. Men showing thighs are apparently a no-no even in an exercise environment.

Even in MMA, it is more common to see fighters wearing board shorts. But with Muay Thai getting more popular in the West, could this be changing?

Wiz is not the only celebrity spotted with Yokkao products. To date, other well-known celebrities spotted with Yokkao include another rapper-songwriter, Skepta, Joe Jonas and Cole Whittle of American dance-rock band DNCE (below), fashion model, Mia Kang and F1 world champion racer, Lewis Hamilton.

The brand’s unique and fashion forward designs seem to have struck a chord with celebrities looking to train in style.

Wiz is a widely-acknowledged trendsetter with over 18 million followers on Instagram and 33 million followers on Twitter. Maybe the trend of wearing Muay Thai shorts as a gym attire will actually cross over into the world of fitness and become a thing. Muay Thai is going to be the next big thing in Hollywood. Maybe?