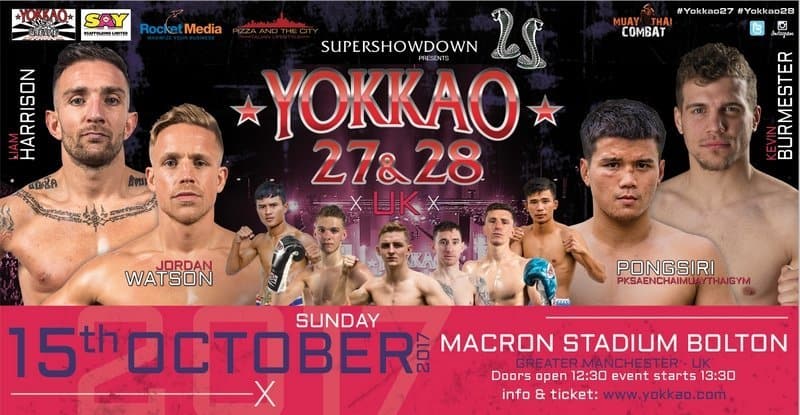 While the October suspension of Muay Thai events leaves Thailand in a state of fighting drought, fans can look abroad to sate their hunger. In less than a week’s time this Sunday 15th October, Yokkao returns to its regular arena of the Bolton Macron Stadium for its 27 and 28 editions of the well-received fight promotion. This coming event features mostly athletes from the UK region but also a number of world class acts that will not be out of place at Lumpinee or Rajadamnern stadium.

Yokkao 27 – 28 will be headlined by defense of the promotion’s 2 world champion titles. For the 65kg belt scramble, Liam Harrison faces Kevin Burmester, a relatively unknown name to those more familiar with the Thai scene. Burmester is a young German kickboxer who has a fight record of 64 wins out of 72 fights with 31 KOs. This will be a game of experience vs raw power between the 32 year-old Harrison and the 24 year-old Burmester.

Harrison’s Bad Company team mate, Jordan Watson faces a more notable opponent in Pongsiri PKSaenchai, a well-known fighter in the Thailand stadium circuit. Pongsiri is a former Lumpinee welterweight champion and Watson is certainly not going to have an easy task keeping his belt. This fight has all the makings of an all-out war and really the one to watch for.

Other than the 2 homegrown champions in their title defense, the 2 fights that Muay Thai fans look forward to see are definitely Superlek Kiatmoo9 vs Christopher Shaw and Rungarai Kiatmoo9 vs Daniel McGowan. Another match up worth mentioning would be the only female bout between Amy Pirnie and Josefine Lindgren Knutsson. Pirnie has had a really good run of performance at the Yokkao shows and never fails to put up a good fight for the fans.

Here’s the full fight card for the double event:

Since 2014, Yokkao has adopted the double-event formula with 6 bouts for each event, totaling 12 for the entire show compared to most Muay Thai events which typically feature 8 to 9 matches. The main draw is of course a good lineup of fights featuring some of the best athletes in Muay Thai. Yokkao’s sponsorship and partnership with the renowned Kiatmoo9 gym has given them access to many top Thai fighters. Not forgetting ties to the PKSaenchai Gym through Yokkao’s own number one celebrity fighter, Saenchai. Just these 2 gyms alone is suffice for a rich pool of talents to draw from. Coupled with top UK fight promoter, Brian Calder’s local knowledge, the UK shows have achieved tremendous success in Europe.