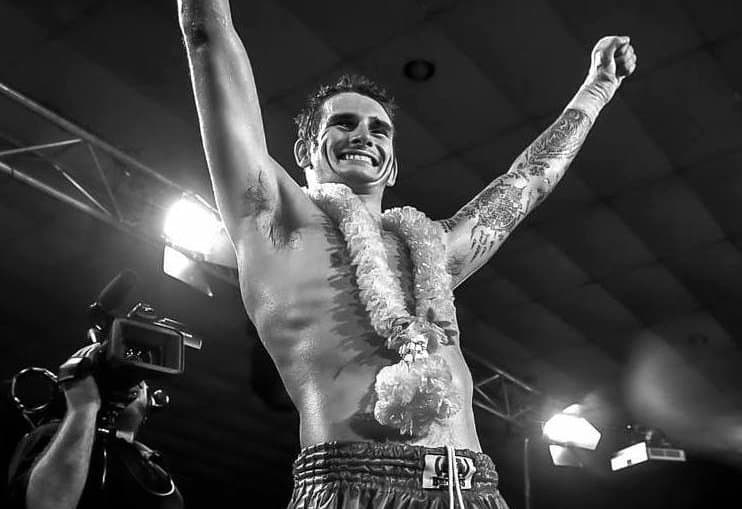 This past Monday, fans around the world witnessed the shocking KO of Singdam at YOKKAO 25 in Hong Kong. Meanwhile, back in Thailand, fans of the Muay Thai stadium circuit were treated with an equally startling KO. ‘Farang’ fighter Chadd Collins celebrated his win over Sakmongkol Sor Sommai via a left elbow strike that left the latter stretchered out.

In a bid to keep up with the times and attract more crowds, more and more foreign fighters have transitioned into the predominantly Thai scene of stadium Muay Thai promotions. Some of the well-known ‘farangs’ to have made a name in Lumpinee and Rajadamnern in the past include Ramon Dekkers, Jean Charles Skarbowsky, and Damien Alamos. This year in June, French fighter Rafi Bohic made history by winning the Lumpinee Stadium Welterweight belt after defeating top seed fighter, Pongsiri PKSaenchaiGym.

Chadd Collins is another ‘farang’ fighter making a name for himself in the Thailand fight scene. The Aussie has proven his place in the native land of Muay Thai, having held up against the best in the country. The Thais know him by the name of Chad Thor. Saengtiannoi, a fighter name he has adopted for the stadium in respect of his trainer. He has been slowly moving up the ranks of the sport, fighting in numerous promotions such as MX MUAY XTREME and Thai Fight where he faced Muay Thai stars Pakorn and Saenchai. The results were a win and a loss respectively. In his fight against Saenchai, Chadd adopted an aggressive forward-moving strategy that resulted in one of the most evenly-matched fights the legend has seen in a while.

This year, Chadd has also crossed fists with several Thai fighters in the ring of Rajadamnern Stadium (Sor Sommai promotions), which in itself is a highest honor of the sport. A month ago in August, he faced and won via decision over a respectable figure in the current Muay Thai circle, Seksun Or.Kwanmuang. His latest win brings him up the rankings and at this rate, he might soon have a shot at a Championship belt in the prestigious stadium.