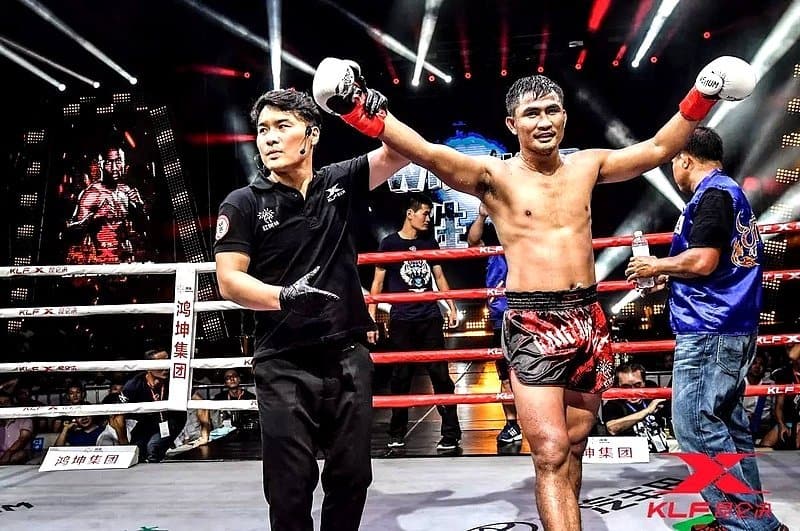 Tucked away down a nondescript alley in the chaotic Chinatown district of Bangkok, stands the historic Chuwattana Gym. Chuwattana has been around for over 4 decades and is renowned around the world among fans of Muay Thai. The camp has been frequently called the “champion factory“ for producing a host of Muay Thai champions such as Lamsongkram, Nopphadet, and Seabmean. The poster boy, and biggest star to come out of the camp is none other than our story’s protagonist, Jomthong Chuwattana.

Born Thanakorn Pawachart in the northeastern Thai province of Yasothon, Jomthong came from humble beginnings like most Thai fighters. Both of his parents were farmers who struggled to make ends meet. Jomthong, along with his 2 older brothers, turned to competitive Muay Thai to ease the family’s burden. He had his first fight the same year he started training at 8, winning on points and displaying apparent talent at an young age. Jomthong was only 15 years old when he won his first Rajadamnern gold.

Jomthong competed for a decade at the highest level of Muay Thai between the years of 2004 and 2014 in the Thai capital. During this period, he made a name for himself through a series of notable wins over fellow Thai champions like Lerdsila, Kaew Fairtex, Sagetdao Petpayathai, and even the best pound-for-pound fighter, Nong-O Kaiyanghadao. But his earliest claim to fame came in 2006 when he defeated Thai legend, Anuwat Kaewsamrit.

To give a perspective on the accomplishment: Anuwat, famously nicknamed the “Iron Hands of Siam”, was a 5-time Fighter of the Year award recipient in Thailand. He captured 13 titles of the highest level in his illustrious career – an achievement that is matched by few in the history of the sport. The 2 heavy-handed fighters clashed in a total of 3 meetings with Jomthong walking away with the win twice, and drawing on one occasion. By then, Jomthong had firmly established his place as one of the Muay Thai greats of this era.

Before his transition to kickboxing, Jomthong had already accumulated a sizeable pot of gold. His accomplishments consist of the prestigious Rajadamnern Stadium champion titles across 3 weight divisions, along with 2 WBC Muay Thai world titles, and a WMC world championship. Towards the tail end of his Muay Thai career, Jomthong also made a brief and successful foray into boxing. He collected 3 more boxing titles including the 2012 WBC All-Asia Super Featherweight Champion, showing his versatility as a stand-up combat artist.

Jomthong’s Chinese debut took place way back in 2010. However, it wasn’t until his Kunlun Fight appearances in 2016 that he truly caught the attention of the Chinese fans and media. He went on a blistering rampage in the 2016 70 kg World Max tournament, beating local heroes Gu Hui and Tian Xin, and wrecking the arm of Korean top-dog Lee Sung-hyun as he blasted his way into the finals. Jomthong’s quest for the Kunlun gold was eventually thwarted in the finals by Superbon Banchamek. But his performance left an indelible impression on Kunlun Fight fans who were ready for more of his action in the ring.

The Chinese media dubbed him “The Golden Boy” (Chinese: 金童), derived from the original phonetic translation of his Thai name (Chinese: 金通猜) when he first fought in China. The nickname has a nice ring to it and it stayed with him. When Jomthong was told that the nickname can be translated to mean “a boy of good fortune” (in the wealthy sense), he took an instant liking to it. For each of his fight appearance in China, his fight purse is twice of what he gets back home. It was an auspicious name for the superstitious Thai fighter.

Jomthong returned to the 2017 Clash of Titans tournament as one of the hot favorites to win the title. The Golden Boy was ready to avenge his loss against Superbon and finish off the season with the tournament gold. Alas, his dreams were shattered into smithereens as he crashed onto the canvas, incapacitated by Marat Girogrian’s red right hand in the final 16.

It has been established that 70 kg is now the most competitive division in the global kickboxing scene. This weight class is a magical meeting point between the lean Asian fighters and genetically heavier European fighters. Jomthong had previously fought at his matured weight of 66-67 kg prior to Kunlun Fight but moved up in weight to compete in the ruthless KLF 70 kg division. Many observers remained critical of his choice in moving up, arguing that he might have made more impact had he remained in the lighter weight class. The futile poundage that he put on manifested as superfluous fat might just have been his undoing.

Jomthong had conveyed his intentions to retire as soon as his time  in the 2017 tournament concludes. So for months since his loss to Marat, Jomthong went into semi-retirement mode. He took time off from training, and photos of him tending to chickens in the backyard surfaced on social media. The images depicted the multi-time champion looking blissfully laid-back but were a heartbreaking sight to his legion of Chinese fans. Jomthong turns 29 this year. He may no longer be in his prime, but to retire after a failed campaign didn’t seem like the most glorious way to exit. Perhaps he knows it too.

As they say, fortune favors the brave. Come April 1st at the Mangrove Tree Resort in Qingdao, China, Jomthong is set to make a courageous comeback on Kunlun Fight 71 after being out of action for over 6 months. It’s no easy comeback as he will go head-on against 2014 KLF World Max Tournament champion, Dzianis Zuev in a Super Fight match-up. It remains to be seen if this would open up the possibility of Jomthong’s re-entry into this year’s Clash of Titans tournament or if this would be the last we will ever see of him in the ring. Either way this goes, it would serve as a honorable final chapter to the fighting legacy of Golden Boy, Jomthong Chuwattana.

Note: This article is a repost of a piece I wrote for Kunlun Fight, originally published on March 20th 2018. The original article can be found on KLF’s website. Link: http://en.kunlunjue.com/portal/news/detail/id/3663.html